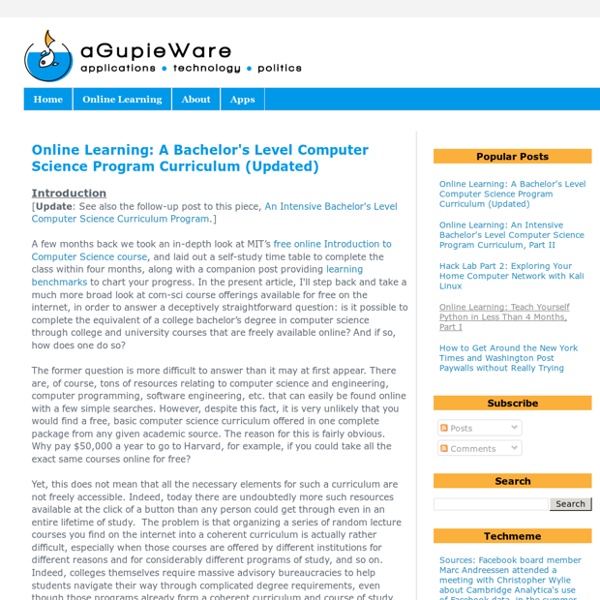 Introduction [Update: See also the follow-up post to this piece, An Intensive Bachelor's Level Computer Science Curriculum Program.] A few months back we took an in-depth look at MIT’s free online Introduction to Computer Science course, and laid out a self-study time table to complete the class within four months, along with a companion post providing learning benchmarks to chart your progress. In the present article, I'll step back and take a much more broad look at com-sci course offerings available for free on the internet, in order to answer a deceptively straightforward question: is it possible to complete the equivalent of a college bachelor’s degree in computer science through college and university courses that are freely available online? And if so, how does one do so? The former question is more difficult to answer than it may at first appear. Yet, this does not mean that all the necessary elements for such a curriculum are not freely accessible. Introductory Courses

12 sites that will teach you coding for free There was a time when knowing how to program was for the geekiest of geeks. That’s not exactly the case today. As most entrepreneurs, freelancers and marketers will tell you, learning how to program can help you succeed. How to Safely Download & Install Software All of these programs that I recommend are hosted on other sites, which is very typical and is no reason for concern. However, it means I have hand you off to another website that I have no control over and hope everything works out there as you download and install the software. Unfortunately, sometimes even a really, really good piece software is hosted at a site that... well, I wouldn't otherwise want to send someone to. The Best Web Hosting Services Advertisement Updated by Joel Lee on 19th June 2017 Are you looking for the best web hosting services for your needs? Whether you need a place to host your small personal blog or a major corporate website, the following list will help you identify the best hosts to use. Finding the best web hosting service isn’t quite as straightforward as searching Google and choosing the one with the lowest price. There are a lot of issues to consider, including the reasons for why you need hosting and how you intend to use it.

The Internet & The World Wide Web Are Not the Same Thing [MakeUseOf Explains] The two terms “Internet” and “World Wide Web” have been used interchangeably ever since the Internet itself became a household “utility” as common as electricity or cable TV. People talk about “surfing the web” and “searching the Internet” like the two terms are one and the same. Are you one of those people? It may be surprising for a lot of people to learn that the basic foundation of the two terms are very distinct.

What Is Moore's Law, And What Does It Have To Do With You? [MakeUseOf Explains] Bad luck has nothing to do with Moore’s Law. If that is the association you had, you are confusing it with Murphy’s Law. However, you were not far off because Moore’s Law and Murphy’s Law are connected. Moore’s Law was formulated by Gordon E. Mosaic (web browser) Mosaic was developed at the National Center for Supercomputing Applications (NCSA)[5] at the University of Illinois Urbana-Champaign beginning in late 1992. NCSA released the browser in 1993,[7] and officially discontinued development and support on January 7, 1997.[8] However, it can still be downloaded from NCSA.[9] Netscape Navigator was later developed by Netscape, which employed many of the original Mosaic authors; however, it intentionally shared no code with Mosaic. Netscape Navigator's code descendant is Mozilla Firefox.[10] Mosaic 1.0 running under System 7.1, displaying the Mosaic Communications Corporation (later Netscape) website.

Memory Sizes Explained - Gigabytes, Terabytes & Petabytes in Layman's Terms It’s easy to see that 500 gigabytes is more than 100 gigabytes. It’s also easy to see that 1 terabyte is larger than 1 gigabyte and that is larger than 1 megabyte. But these are all abstract terms and names. We can visualize 1 inch or 1 meter or 1 mile, but how can we visualize 1 gigabyte? 1 terabyte? 1 petabyte? JPEG, GIF, And PNG: When To Use Each Kind Of Image Generally, when you see an image used on the Internet, it’s a JPEG, GIF, or PNG. If you’re just a viewer of said images, you probably don’t spend too much time thinking about the different file types. For people who make images online, knowing when to use each type is critical. Sure, they can technically be used interchangeably, and users will still see the images, but they may not load as fast and look as good.

Getting to Know Markdown The Web has become enmeshed in all aspects of our lives. And whether we realize it or not, so has HTML, the language that’s used to format Web pages. Even people who aren’t web designers or coders — bloggers, writers, even folks who want to create content for personal web pages — need to know some HTML. Or do they? While basic HTML is fairly easy to learn, there are a lot of people who use that skill only occasionally. And, anyway, knowing even a bit of HTML is overkill for most purposes.

SOLID (object-oriented design) In computer programming, SOLID (Single responsibility, Open-closed, Liskov substitution, Interface segregation and Dependency inversion) is a mnemonic acronym introduced by Michael Feathers for the "first five principles" named by Robert C. Martin[1][2] in the early 2000s[3] that stands for five basic principles of object-oriented programming and design. The principles when applied together intend to make it more likely that a programmer will create a system that is easy to maintain and extend over time.[3] The principles of SOLID are guidelines that can be applied while working on software to remove code smells by causing the programmer to refactor the software's source code until it is both legible and extensible.

United and Orbitz are suing a 22-year-old who exposed cheap airfare hack United Airlines and Orbitz are suing a 22-year-old website founder who has made it easier for travelers to find "hidden city" tickets, which can offer big discounts on airfares. "Hidden city" ticketing is the practice of booking a one-way plane ticket from one city to another, and then getting off the plane on a layover before the final destination. It may seem counterintuitive, but booking the longer flight can sometimes be cheaper because of the convoluted mess that is airline pricing. It's not illegal — but that doesn't mean airlines and booking sites want people to do it. It's also not that hidden.

Review: Puppet vs. Chef vs. Ansible vs. Salt The proliferation of virtualization coupled with the increasing power of industry-standard servers and the availability of cloud computing has led to a significant uptick in the number of servers that need to be managed within and without an organization. Where we once made do with racks of physical servers that we could access in the data center down the hall, we now have to manage many more servers that could be spread all over the globe. Featured Resource Presented by PC Connection | EMC End User Computing solutions with XtremIO deliver massive, consistent I/O performance to ensure that Ultimate Guide to Google Plus I’ve seen quite a few people who don’t understand Google Plus or think Google Plus is some sort of wasteland with giant swaths of inactivity. I was one of these people until I decided to dive in and really explore the social network and become active on there to see what this G+ thing is all about. The end result is this guide, a complete Google Plus guide for the person who is just getting started, or quite simply, started but staring at a boring feed with zero activity.