“Why did you shoot me? I was reading a book”: The new warrior cop is out of control 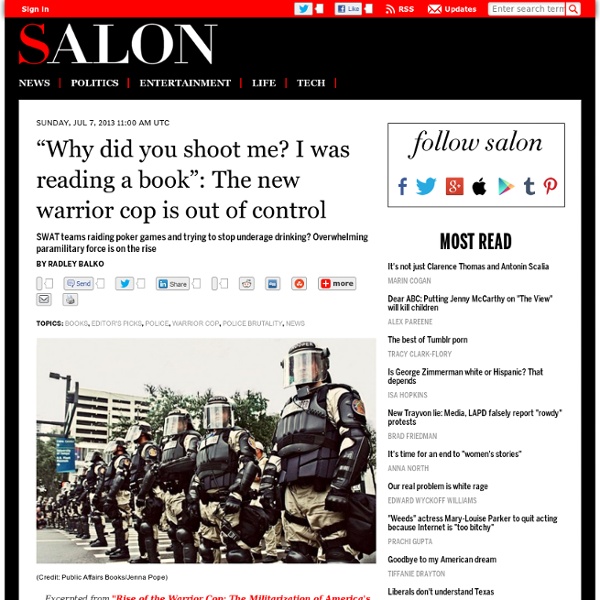 Sal Culosi is dead because he bet on a football game — but it wasn’t a bookie or a loan shark who killed him. His local government killed him, ostensibly to protect him from his gambling habit. Several months earlier at a local bar, Fairfax County, Virginia, detective David Baucum overheard the thirty-eight-year-old optometrist and some friends wagering on a college football game. “To Sal, betting a few bills on the Redskins was a stress reliever, done among friends,” a friend of Culosi’s told me shortly after his death. “None of us single, successful professionals ever thought that betting fifty bucks or so on the Virginia–Virginia Tech football game was a crime worthy of investigation.” Baucum apparently did. On the night of January 24, 2006, Baucum called Culosi and arranged a time to drop by to collect his winnings. Sal Culosi’s last words were to Baucum, the cop he thought was a friend: “Dude, what are you doing?” But the mission creep hasn’t stopped at poker games. Related:  Getting along with the Police

Russia Warns Obama: Global War Over “Bee Apocalypse” Coming Soon The shocking minutes relating to President Putin’s meeting this past week with US Secretary of State John Kerry reveal the Russian leaders “extreme outrage” over the Obama regimes continued protection of global seed and plant bio-genetic giants Syngenta and Monsanto in the face of a growing “bee apocalypse” that the Kremlin warns “will most certainly” lead to world war. According to these minutes, released in the Kremlin today by the Ministry of Natural Resources and Environment of the Russian Federation (MNRE), Putin was so incensed over the Obama regimes refusal to discuss this grave matter that he refused for three hours to even meet with Kerry, who had traveled to Moscow on a scheduled diplomatic mission, but then relented so as to not cause an even greater rift between these two nations. “It is clear that these chemicals have the potential to affect entire food chains. ABC commissioned world renowned environmental toxicologist Dr. Source Rating: 4.8/5 (292 votes cast) Related Posts

VIDEO: Driver Questions Officer at July 4 DUI Checkpoint *So who out there can provide the best method for remedying such a travesty of justice? Michael Badnarik has gone far to educate Americans as to their Constitutional rights, so if you want to keep them please check out some of his work here and share it with your fellow sovereign friends and family. via WTVR.com RUTHERFORD COUNTY, Tenn. – A man posted to YouTube video he says shows him questioning sheriff’s deputies about a July 4 DUI checkpoint. The driver said he was pulled over, bullied around and searched without consent during the traffic stop. “All this harassment because my window was not lowered enough to his preference,” the driver posted on YouTube. “I broke no laws whatsoever. Here is a great example of how to ignore the unlawful requests from law enforcement.Las Vegas DUI Checkpoint Refusal 6Share 57Share

On the Phenomenon of Bullshit Jobs | Strike! Magazine Ever had the feeling that your job might be made up? That the world would keep on turning if you weren’t doing that thing you do 9-5? David Graeber explored the phenomenon of bullshit jobs for our recent summer issue – everyone who’s employed should read carefully… On the Phenomenon of Bullshit Jobs by David Graeber. In the year 1930, John Maynard Keynes predicted that, by century’s end, technology would have advanced sufficiently that countries like Great Britain or the United States would have achieved a 15-hour work week. Why did Keynes’ promised utopia – still being eagerly awaited in the ‘60s – never materialise? So what are these new jobs, precisely? These are what I propose to call “bullshit jobs.” It’s as if someone were out there making up pointless jobs just for the sake of keeping us all working. The answer clearly isn’t economic: it’s moral and political. I think this is actually a pretty accurate description of the moral dynamics of our own economy.

Sarah Stillman: The Use and Abuse of Civil Forfeiture On a bright Thursday afternoon in 2007, Jennifer Boatright, a waitress at a Houston bar-and-grill, drove with her two young sons and her boyfriend, Ron Henderson, on U.S. 59 toward Linden, Henderson’s home town, near the Texas-Louisiana border. They made the trip every April, at the first signs of spring, to walk the local wildflower trails and spend time with Henderson’s father. This year, they’d decided to buy a used car in Linden, which had plenty for sale, and so they bundled their cash savings in their car’s center console. Just after dusk, they passed a sign that read “Welcome to Tenaha: A little town with BIG Potential!” They pulled into a mini-mart for snacks. He asked if Henderson knew that he’d been driving in the left lane for more than half a mile without passing. No, Henderson replied. Were there any drugs in the car? The county’s district attorney, a fifty-seven-year-old woman with feathered Charlie’s Angels hair named Lynda K. “Where are we?”

The 2005 Bankruptcy Bill: Knowing a Financial Crisis Was Imminent, Banks Lobbied Government to Pass Laws to Preserve Their Wealth Our government representatives would like us to believe that the subprime mortgage crisis(2, 3, 4, 5) could not have been predicted. The truth is, the collapse was expected and authorities were well aware that crimes were being committed. I. Introduction It is said that if you want to find the corrupt, follow the money. This catchphrase, however, cannot be used as a preventative measure; it can only be used in retrospect to punish perpetrators of a crime. In our current centralized economic system, the best way to avoid pitfalls and preserve wealth, improving lifestyle, is to pay close attention to changes in laws and be mindful of their implications. “Referred to colloquially as the ‘New Bankruptcy Law’, the Act of Congress attempts to, among other things, make it more difficult for some consumers to file bankruptcy under Chapter 7; some of these consumers may instead utilize Chapter 13…. Bankruptcy Abuse Prevention, Consumer Protection Act Signed II. Peter Schiff Was Right 2006 - 2007

Know Your Rights: Photographers Taking photographs of things that are plainly visible from public spaces is a constitutional right – and that includes federal buildings, transportation facilities, and police and other government officials carrying out their duties. Unfortunately, there is a widespread, continuing pattern of law enforcement officers ordering people to stop taking photographs from public places, and harassing, detaining and arresting those who fail to comply. Learn more » Your rights as a photographer: When in public spaces where you are lawfully present you have the right to photograph anything that is in plain view. Using the ACLU’s “Know Your Rights: Photographers” resource, HitRecord – a collaborative artist production company – produced an animated video about the right to photograph in public, featuring music by the Gregory Brothers and directed by actor Joseph Gordon-Levitt: If you are stopped or detained for taking photographs: Always remain polite and never physically resist a police officer.

Steal This Article Girl Stealing Grapes, Henriëtte Willebeek le Mair (1915) “Stealing is stealing. I don’t care if it’s on the Internet or you’re breaking into a warehouse somewhere—it’s theft.”—United States Senator Patrick Leahy If a rich person has something you need, you should take it. The rich people who run these big corporations like to act as if we live in an age of austerity. TNI Vol. 20: Off-Brand is out this week. The truth is the human race has never been better off. Those at the top take all the credit in the best of times and blame everyone beneath them the rest of the time. But the concentration of wealth in the hands of a tiny minority is not the result of some higher law and a can-do attitude. Having money means defining right and wrong. Change comes about when those in power feel scared: when they feel that conceding to the public interest is the only way to maintain their status. It’s easy to steal back your money from the rich. You could, of course, get caught. Consider working less.

Abusive, Camera-Phobic Mall Cop Picks Fight With Wrong Woman Via Information Liberation : Depending on what side of fallacious authority you may have found yourself in the past, this video may either make you cheer or collapse in disgust. Maybe both? A group of people taking pictures on the very edge of mall property – pictures not of the mall, mind you – is confronted by a wildly out of control mall security guard. The guard demands that they leave because she says they’re not respecting mall rules. At this point, she actually tries to confiscate the cameras and then tells them to delete their footage. UPDATE: It appears that the individuals with cameras were taking photos of a truck that was overturned in the neighboring ravine.

News is bad for you – and giving up reading it will make you happier | Media In the past few decades, the fortunate among us have recognised the hazards of living with an overabundance of food (obesity, diabetes) and have started to change our diets. But most of us do not yet understand that news is to the mind what sugar is to the body. News is easy to digest. News misleads. We are not rational enough to be exposed to the press. News is irrelevant. News has no explanatory power. News is toxic to your body. News increases cognitive errors. News inhibits thinking. News works like a drug. News wastes time. News makes us passive. News kills creativity. Society needs journalism – but in a different way. I have now gone without news for four years, so I can see, feel and report the effects of this freedom first-hand: less disruption, less anxiety, deeper thinking, more time, more insights. This is an edited extract from an essay first published at dobelli.com.

10 tips and tactics for investigating Sovereign Citizens Law enforcement officers across the country are experiencing a growing number of contacts with Sovereign Citizens — individuals and groups who possess a strong anti-government ideology. Because they believe the government, its representatives, laws, and policies are illegitimate, Sovereign Citizens regularly find themselves in conflict with the law. Although it’s difficult to accurately access their numbers, it is safe to say that since 2000, their numbers and the violent incidents associated with them have increased at an alarming rate. Here, I’ll provide you with some investigative tips and suggestions should you encounter a Sovereign Citizen, but, I’d be remiss if I did not take a moment to emphasize that whether you’re dealing with a novice or a hardliner Sovereign Citizen, the prospect of violent action and threats to officer safety should never be taken for granted. 1.) 2.) 3.) 4.) They may identify themselves as “the representative of…(their legal name).” 5.) 6.) 7.) 8.) 9.) 10.)

Related:
Related:  Getting along with the Police