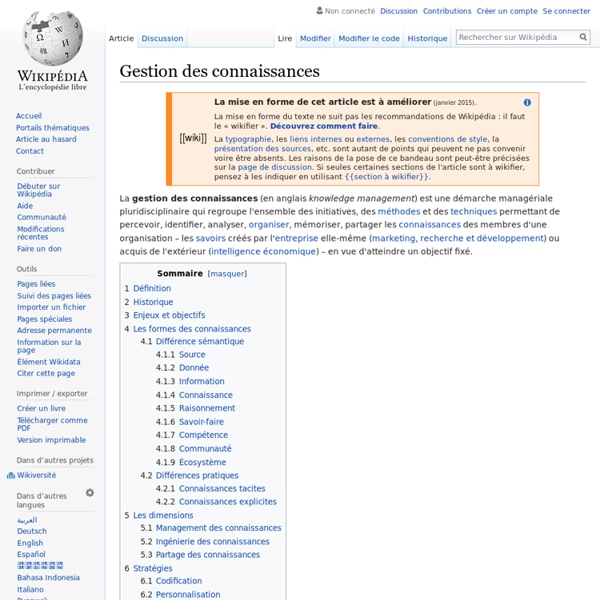 ImageNet - Wikipedia The ImageNet project is a large visual database designed for use in visual object recognition software research. As of 2016, over ten million URLs of images have been hand-annotated by ImageNet to indicate what objects are pictured; in at least one million of the images, bounding boxes are also provided.[1] The database of annotations of third-party image URL's is freely available directly from ImageNet; however, the actual images are not owned by ImageNet.[2] Since 2010, the ImageNet project runs an annual software contest, the ImageNet Large Scale Visual Recognition Challenge (ILSVRC), where software programs compete to correctly classify and detect objects and scenes. Dataset[edit] ImageNet crowdsources its annotation process. Image-level annotations indicate the presence or absence of an object class in an image, such as "there are tigers in this image" or "there are no tigers in this image".

Hirotaka Takeuchi Hirotaka Takeuchi (竹内 弘高, Takeuchi Hirotaka?, born October 16, 1946) is a Harvard Business School professor and former dean of the Graduate School of International Corporate Strategy at Hitotsubashi University in Tokyo. Takeuchi holds an MBA and PhD from the Haas School of Business at the University of California, Berkeley, and BA from International Christian University. He co-authored Can Japan Compete? with Michael Porter (Porter, Takeuchi & Sakakibara 2000) and has been described by BusinessWeek as one of the Top 10 “management school professors for inhouse corporate education programs” in the world. He has worked in the industry as a management consultant at McKinsey & Company and in advertising at McCann Erickson in Tokyo and San Francisco.

Malicious Linux Commands - From (This article was originally published in Ubuntu Forums but was removed there. Ubuntuguide feels that knowledge about these risks is more important than any misguided attempts to "protect the public" by hiding their potential dangers or protect the (K)Ubuntu/Linux image. The original article has therefore been re-created (and subsequently edited) here.) ATTENTION: It is worthwhile to have some basic awareness about malicious commands in Linux. Knowledge intensive business services Knowledge Intensive Business Services (commonly known as KIBS) are services and business operations heavily reliant on professional knowledge. They are mainly concerned with providing knowledge-intensive support for the business processes of other organizations. As a result, their employment structures are heavily weighted towards scientists, engineers, and other experts.

A picture is worth a thousand words The expression "Use a picture. It's worth a thousand words." appears in a 1911 newspaper article quoting newspaper editor Arthur Brisbane discussing journalism and publicity.[1] 1913 newspaper advertisement Ikujiro Nonaka Ikujiro Nonaka (野中 郁次郎, Nonaka Ikujirō?, born May 10, 1935) is a Japanese organizational theorist and Professor Emeritus at the Graduate School of International Corporate Strategy of the Hitotsubashi University, best known for his study of knowledge management. Biography[edit] Nonaka was born in Tokyo in 1935 and as a child he lived through the Japanese defeat during World War II. His nationalist spirit led him to believe that, in order to avoid further humiliation, Japan should adapt its technological and organizational skills.