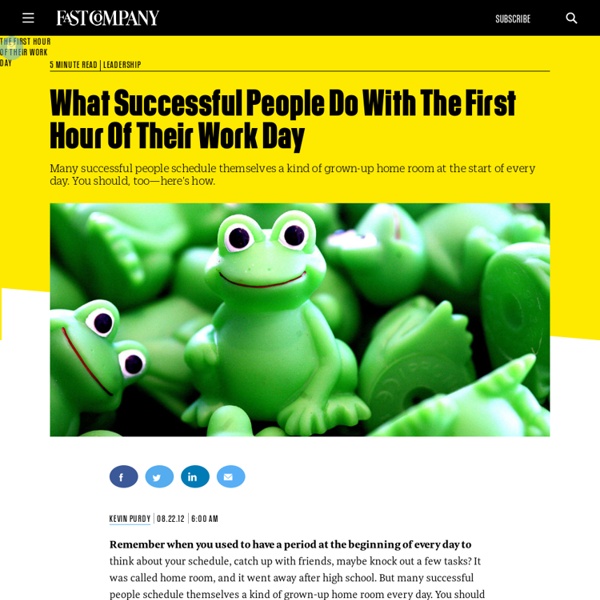 Remember when you used to have a period at the beginning of every day to think about your schedule, catch up with friends, maybe knock out a few tasks? It was called home room, and it went away after high school. But many successful people schedule themselves a kind of grown-up home room every day. You should too. The first hour of the workday goes a bit differently for Craig Newmark of Craigslist, David Karp of Tumblr, motivational speaker Tony Robbins, career writer (and Fast Company blogger) Brian Tracy, and others, and they’ll tell you it makes a big difference. Here are the first items on their daily to-do list. Don’t Check Your Email for the First Hour. Tumblr founder David Karp will "try hard" not to check his email until 9:30 or 10 a.m., according to an Inc. profile of him. If you need to make sure the most important messages from select people come through instantly, AwayFind can monitor your inbox and get your attention when something notable arrives. Choose Your Frog

Ergodic hypothesis The ergodic hypothesis is often assumed in the statistical analysis of computational physics. The analyst would assume that the average of a process parameter over time and the average over the statistical ensemble are the same. This assumption that it is as good to simulate a system over a long time as it is to make many independent realizations of the same system is not always correct. (See, for example, the Fermi–Pasta–Ulam experiment of 1953.) Phenomenology[edit]

5 Most Ignored Principles Of Great Leadership Great Leadership, before being a way to walk, is first a potential to realize. There are five principles from which a good Leader turns into Great. Five very powerful statements one must accept, experience and integrate so that the Humanist within becomes the voice of the Leader and the steps he walks becomes the embodiment of the Wisdom he owns. Here is a list with the 5 most ignored principles of Great Leadership and yet, like a 5 pointed star, this list displays the 5 pillars that hold the space for Leadership to be extraordinary. 1). The Exact Amount Of Time You Should Work Every Day Editor's Note: This is one of the most-read leadership articles of 2014. Click here to see the full list. You know that taking frequent breaks is good for your productivity, focus, and creativity, but you just never seem to get around to it. You feel stressed and exhausted when you hammer away at your keyboard all day, and the evidence is everywhere. A study earlier this year from the University of Toronto on lunch break patterns of office workers revealed the absence of a proper lunch break can actually lower productivity. John Trougakos, associate professor of Organizational Behavior & HR Management, who coauthored the study, argues our brains have a limited pool of psychological energy.

Multiverse (religion) In religion a multiverse is the concept of a plurality of universes. Some religious cosmologies propose that the cosmos is not the only one that exists. The concept of infinite worlds is mentioned in the Apannaka Jataka: "Disciples," the Buddha said "nowhere between the lowest of hells below and the highest heaven above, nowhere in all the infinite worlds that stretch right and left, is there the equal, much less the superior, of a Buddha. Two Alternative Towel Hanger Ideas I’ve always felt that every home necessity brings an opportunity to get creative and come up with something aesthetically appealing – and unique. You can infuse the essence of you into every item you place inside your home. Today, let’s talk towel hangers. I have two ideas that are really simple – and each allows a ton of freedom to create a piece that fits your own personal aesthetic. The first is a towel ring; the second, a towel rack. Use them in your bathroom, your kitchen… maybe even in your living room as a way to store blankets!

Contract Creator (This won't appear in the final contract.) Attention: Re: Services Agreement Dear : pleased that you have selected to assist you with: The scope of work is the most critical part of a contract and should be as precise as possible. Using clear language and defining terms will ensure you and your client are on the same page before the work starts and reduce the likelihood of conflicts and misunderstandings down the road.

Modal realism The term possible world[edit] The term goes back to Leibniz's theory of possible worlds, used to analyse necessity, possibility, and similar modal notions. In short: the actual world is regarded as merely one among an infinite set of logically possible worlds, some "nearer" to the actual world and some more remote. Holder for Charging Cell Phone (made from lotion bottle My husband and I both have cell phones. And both of us have phone chargers. And that means lots of obnoxious cords. You never know when one of us may be moving phone cords around, to give our phones an extra charge while we’re chatting away……… or trying to charge our phones up before running errands or something. Needless to say, those phone cords seem to be everywhere…..and are generally in the way and hanging all over the floor.

7 Step Process to Repeat Success, Modeled After Apple's Routine for Creativity  Creativity can be routinized. If you don't believe that, see the coffee-induced brainstorming process Jony Ive, Steve Jobs and the Apple design team have used over the past 20 years; giving birth to the iMac, the iPod, the iPhone, and the iPad. An Italian designer on Jony Ive's design team perfected Apple's espresso ritual that bolsters their twice-weekly, 2 hour design meetings in their secure design studio in Apple's Cupertino Campus. "We can work with a level of collaboration that seems particularly rare" Ive said. "In fact, the memory of how we work will endure beyond the products of our work."