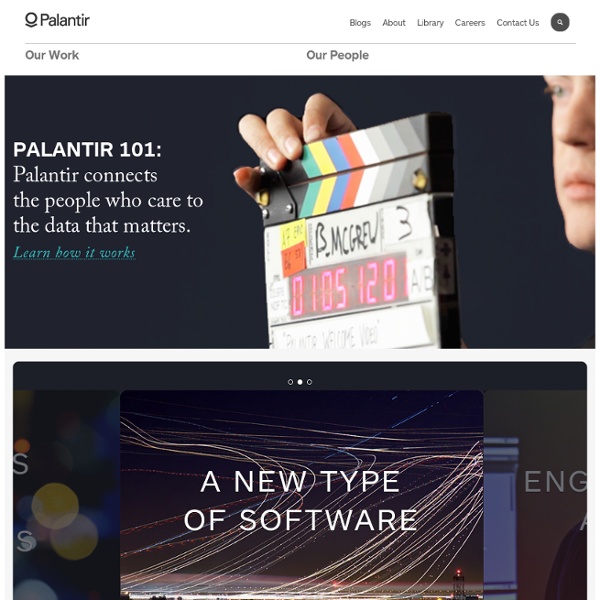 Virtual labs where doctors and prosthetic designers can collaborate in the same “room.” Touch screen interfaces for cars. Robots that work with autistic children. Sequencing the genome of cancer cells. These are just some of the projects that the 2013 Palantir Scholarship for Women in Engineering finalists are working on. These nine women were invited [...]

The Universal Declaration of Human Rights Whereas recognition of the inherent dignity and of the equal and inalienable rights of all members of the human family is the foundation of freedom, justice and peace in the world, Whereas disregard and contempt for human rights have resulted in barbarous acts which have outraged the conscience of mankind, and the advent of a world in which human beings shall enjoy freedom of speech and belief and freedom from fear and want has been proclaimed as the highest aspiration of the common people, Whereas it is essential, if man is not to be compelled to have recourse, as a last resort, to rebellion against tyranny and oppression, that human rights should be protected by the rule of law, Whereas it is essential to promote the development of friendly relations between nations, Whereas Member States have pledged themselves to achieve, in co-operation with the United Nations, the promotion of universal respect for and observance of human rights and fundamental freedoms, Article 1.

The Arrow of Time We are all aware of an intuitive "flow" of time from past to future. Not only do we feel this flow of time, but we also see it manifested in the behaviour of objects which change over time. Many objects seem to behave differently in the forward time direction when compared to the backward time direction. Ontology Neotel uses Ontology to align and unify data across their enterprise IT infrastructure and Ontology Intelligent 360 for service management to align services data across their OSS/BSS. Situation Neotel, South Africa's first converged telecommunications network operator, chose Ontology to dynamically join, align and present customer, service, and infrastructure data from existing IT systems to allow Neotel to lower OPEX and speed migrations through a fully integrated service view. Neotel has experienced rapid growth and continues to innovate by offering new services to its corporate customers.

Synthetic Environment for Analysis and Simulations Purdue University's Synthetic Environment for Analysis and Simulations, or SEAS, is currently being used by Homeland Security and the US Defense Department to simulate crises on the US mainland.[1] SEAS "enables researchers and organizations to try out their models or techniques in a publicly known, realistically detailed environment."[2] It "is now capable of running real-time simulations for up to 62 nations, including Iraq, Afghanistan, and China. The simulations gobble up breaking news, census data, economic indicators, and climactic events in the real world, along with proprietary information such as military intelligence. [...] The Iraq and Afghanistan computer models are the most highly developed and complex of the 62 available to JFCOM-J9. Each has about five million individual nodes representing things such as hospitals, mosques, pipelines, and people

Compassion Compassion personified: a statue at the Epcot center in Florida Compassion is the response to the suffering of others that motivates a desire to help.[1][2] Compassion is often, though not inevitably, the key component in what manifests in the social context as altruism.[citation needed] In ethical terms, the expressions down the ages of the so-called Golden Rule often embodies by implication the principle of compassion: Do to others what you would have them do to you.[3][original research?] The English noun compassion, meaning to love together with, comes from Latin.

Social Cohesion and Reconciliation (SCORE) Index The SCORE index is designed to assess two components of peace in society. The first of these is social cohesion which refers to the quality of coexistence between individuals within their own group and the institutions that surround them. The second component is reconciliation which refers to an on-going effort for establishing peace between groups that were previously engaged in an event of dispute or conflict. The needs driving the development of the index Although a lot has been done in order to promote better intergroup relations and, ultimately, coexistence in divided societies, there is a dearth of tools which can adequately analyze the factors which underpin a peaceful society. Scholars as well as practitioners are thus often left in the dark with regards to which of the peace-building activities, interventions, and policies that have come into effect, are in fact efficient and fruitful in promoting positive outcomes for intergroup relations.

Time and the Block Universe Time and the Block Universe This page considers the nature of time itself. Using a purely logical argument - involving no physics or mathematics whatsoever - we shall see that time must behave in a way which is completely at odds with our usual mental conception of the passage of time. As Einstein himself said, the flow of time is only a "stubbornly persistent illusion". This page might very well shake the way you view the nature of time. "There is nothing outside the universe"