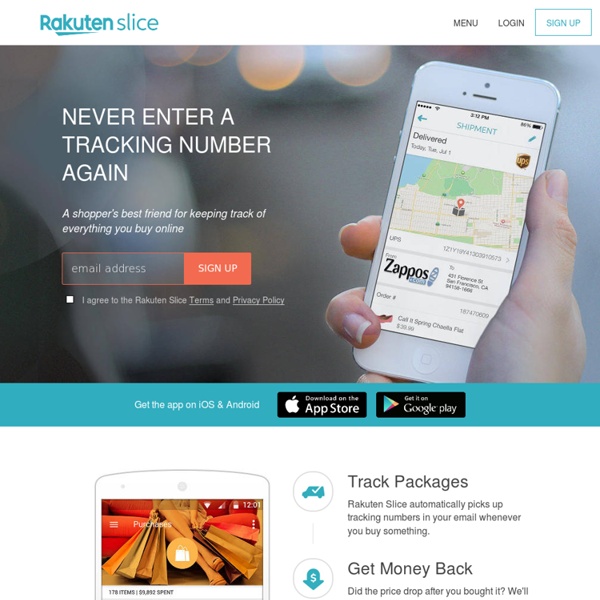 Evidence-based program: blood & biomarker analysis, research, algorithm, scientific team Take a closer look at how InsideTracker works It starts with your blood... Gil Blander, the founder of InsideTracker, has done extensive research into biological markers in the blood. Unlike genetics, these “biomarkers” are dynamic and can be modulated by simple interventions such as diet, supplementation, exercise, and lifestyle changes. All About Asset Location: How to Make the Most of Your Accounts This is a guest post from Robert Brokamp of The Motley Fool. Robert is a Certified Financial Planner and the adviser for The Motley Fool’s Rule Your Retirement service. He also has a newly reinvigorated blog, and you can have your day interrupted once or twice by his Twittering. Robert contributes one new article to Get Rich Slowly every two weeks. When he submitted this, Robert advised, “File this under the ‘long and tedious but important’ category.

Mailbox iOS App is a Security Fail # Update 1After posting this on HackerNews some developers / users feel my hypothesis is wrong and one can not repeat the steps below without having physical access to an user’s phone or locked devices. I agree to this. I also need to check for on which iOS version this is secure. Because as per as I remember, this is definitely doable in earlier version of iOS. But the original problem still remains same. These files are unencrypted and unprotected and one can copy your entire mail contents if he/she has access to your phone.File Protection API won’t be enough to protect data for unlocked phones.

WriteThat.Name’s New Chrome Extension Updates Your Address Book Or CRM With Contact Info Found Online After a little bit of a rough start, the automatic address book updating service WriteThat.Name has become one of my preferred “set it and forget it” tools for keeping things organized. Built by Paris-based Kwaga, WriteThat.Name is one of those under-the-radar technologies that doesn’t get a lot of media attention, but is slowly approaching profitability with more than 40,000 paying users and revenue growth of more than 15 percent month-over-month. For those who missed it the first time around, the company last year launched a service that tackles an area in need of more attention and solutions: the address book. Initially, I’ll admit I was not thrilled with Kwaga’s product. After glowing reviews on the web promised a marvel, I was disappointed to find it engaging in some spammy techniques involving emails sent on your behalf that you couldn’t opt out of without paying.

Beware of These Tipping Traps That Make You Overpay I always tip well, even when I feel service was less than spectacular, because only because society expects it. I've been a server, so I don't begrudge tipping in that respect, but I do find it to be a nasty, brutish, and outdated convention, and one that is only getting worse. Back in my youth as a waiter, standard tipping was 10%, and you went to 15% for great service, 20% for exceptional... now I would never tip below 20% for basic service. Wonder what will be the norm in another 20 years. My problem with the practice of tipping is this... it's unfair to the worker.

The tig Manual The display consists of a status window on the last line of the screen and one or more views. The default is to only show one view at a time but it is possible to split both the main and log view to also show the commit diff. If you are in the log view and press Enter when the current line is a commit line, such as: commit 4d55caff4cc89335192f3e566004b4ceef572521 Break Bad Habits in Five Days Break Bad Habits In Five Days Tasha Quit Eating Sugar Nagina Quit Biting Her Nails Marty Quit Smoking And Pavlok comes with a 6-MONTH, 100% money back guarantee Want To Try One? The Protean Echo Reduces All Of Your Credit Cards To One Ubercard Ready to enter a cardless future but not quite sure about NFC? The Protean Echo might be for you. This clever project essentially captures your credit cards onto one multi-purpose card that can hold up to three cards at a time.

Twist Aims To Replace Those Annoying Texts About Running Late, Raises $6M Led By Bridgescale As many of my friends and colleagues will tell you, I’m someone who’s perpetually running late. As a result, I’m constantly sending out text messages that offer some variation on, “Running 5 minutes late, sorry!” A new startup called Twist promises a smarter, easier approach to sending those messages. When you’ve got a meeting, you can enter the destination, time, and contact info of the participants.

Slideshow: Money Graffiti To be perfectly upfront, what we’re about to show you is not something we endorse. The legality of writing on U.S. currency isn’t clear-cut: according to Title 18 of the United States Code, Section 333 (18 U.S.C. §333), “whoever mutilates, cuts, defaces, disfigures, or perforates, or unites or cements together, or does any other thing to any bank bill… with intent to render such bank bill, draft, note, or other evidence of debt unfit to be reissued, shall be fined under this title or imprisoned not more than six months, or both.” The key term here is “intent to render” that bill to be reissued, which implies that it has to be taken out of circulation, and the bills we have included in this slideshow may very well be still exchanging hands. (Section 331 of the code, by the way, addresses the “mutilation” of coins, and as you can see here, the folks at the U.S. Mint have actually highlighted the word “fraudulently” in the text.) Mint.com the best FREE way to manage your money.

eMailGanizer for iPhone As someone who organizes email by folders, the default mail app for iOS is awkward at best. Typically, I only read incoming and send outgoing message on iOS. I do all of my filing back on my Mac.