Venturing Resources. Mentoring BSA 2014 University of Scouting. Mentoring. Download a printer-friendly PDF of this module Download a PPT of this module Self-Introductions (Slide 1) Presenter introduces himself and asks all participants to give their name and volunteer position. 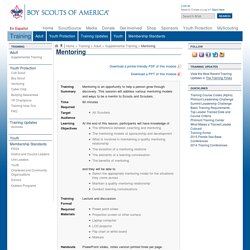 What Is a Mentor? (Slide 2) Ask: "What is a mentor? " Afterwards, state: In the Homer's story "The Odyssey," when Odysseus left for the Trojan War, he entrusted Mentor with the guidance and education of his son, Telemachus. The first recorded modern usage of the term can be traced to a book entitled "Les Aventures de Telemaque," by the French writer François Fénelon. The word "mentor" comes from the Greek language and has its roots in the terms "steadfast" and "enduring.

" Re-emphasize: A mentor is A wise teacherA guideA friend Is Mentoring Like Coaching? Ask: "Is mentoring and coaching the same thing? " One description states that coaching is the process of facilitating the performance, learning, and development of another person. Show Slide 3. Two Types of Mentoring Show Slide 8. Show Slide 9. New Venturing Materials - Western Region Venturing. As new materials are released to compliment the new Awards and Training for the Venturing program, we'll update this page with direct links to them. 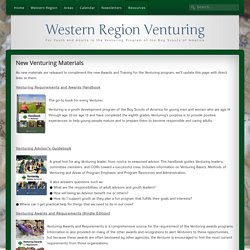 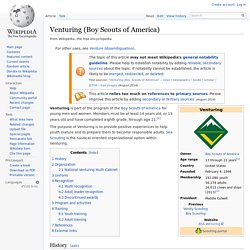 Members must be at least 14 years old, or 13 years old and have completed eighth grade, through age 21.[1] In 1949, the Senior Scout Division became the Explorer Division. Sea Scouts became Sea Explorers, Air Scouts became Air Explorers, and Explorer Scouts became just Explorers. The Explorer program became less of an advanced outdoor program, and more a broader program for young men, with the minimum age lowered to 14 years old. Explorers got a new advancement program leading to the Silver Award. In 1959, Explorer advancement was dropped. In 1969, the BSA allowed young women ages 14–20 to join special-interest Explorer posts, which caused many posts to be become co-ed. In the early 1980s, posts that primarily consisted of seminars at high school with guest speakers were designated as Career Awareness Explorer posts. The National Venturing Youth Cabinet are the youth leaders of the Venturing division. Powder Horn (Boy Scouts of America) There is not currently an official Powder Horn website. 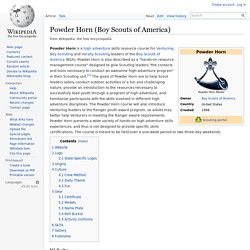 Since at least 2003, an unofficial website has been maintained by Powder Horn volunteers.[2] Interested Scouters should contact their local council service center for official information about upcoming Powder Horn courses, and an unofficial list of many current courses can be found at: Some states may choose to create a custom Powder Horn logo, such as a Texas star suspending a powder horn. The Powder Horn course was initially created in the state of Texas in 1998, and subsequently presented at the Philmont Scout Ranch in the fall of 1999. The course was then rolled out to be run at region and area levels, and can now be offered by local councils.

There is now a Powder Horn Course Director Conference, usually held in each region at least once a year. The Powder Horn staff specifically promote a custom-tailored Venturing-like Scouting leadership culture. Possible high adventure skills include: Kodiak (Boy Scouts of America) Introduction to Leadership Skills for Crews is recommended but not required. 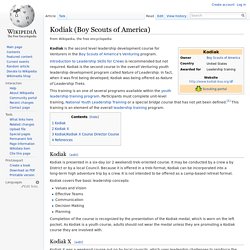 Kodiak is the second course in the overall Venturing youth leadership development program called Nature of Leadership. In fact, when it was first being developed, Kodiak was being offered as Nature of Leadership Treks. Kodiak is presented in a six-day (or 2 weekend) trek-oriented course. It may be conducted by a crew a by District or by a local Council. Venturing Crew Officers Orientation. Introduction to Leadership Skills for Crews. Format[edit] ILSC helps crew members with leadership positions to learn about their new roles and how to most effectively reach success in that role. 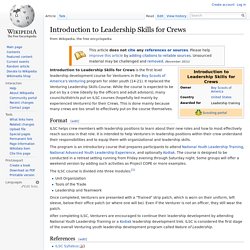 It is intended to help Venturers in leadership positions within their crew understand their responsibilities and to equip them with organizational and leadership skills. The ILSC course is divided into three modules:[1] Unit OrganizationTools of the TradeLeadership and Teamwork Once completed, Venturers are presented with a "Trained" strip patch, which is worn on their uniform, left sleeve, below their office patch (or where one will be). References[edit] ILSC Syllabus} External links[edit]