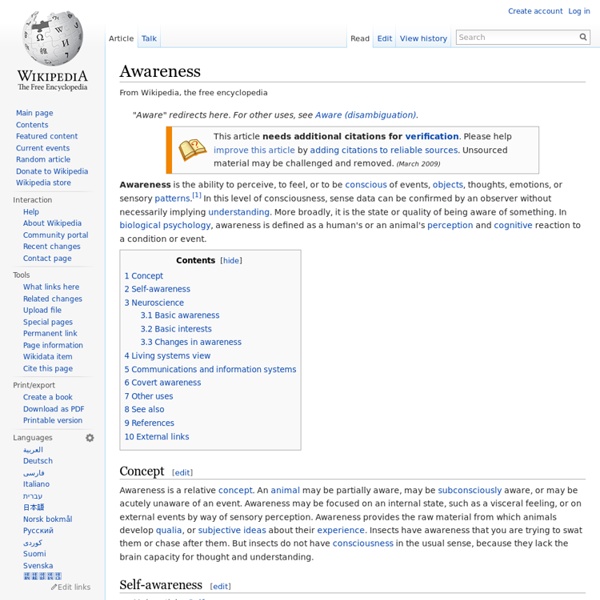 Concept[edit] Awareness is a relative concept. An animal may be partially aware, may be subconsciously aware, or may be acutely unaware of an event. Awareness may be focused on an internal state, such as a visceral feeling, or on external events by way of sensory perception. Self-awareness[edit] Main article: Self-awareness Popular ideas about consciousness suggest the phenomenon describes a condition of being aware of one's awareness or, self-awareness.[2] Efforts to describe consciousness in neurological terms have focused on describing networks in the brain that develop awareness of the qualia developed by other networks.[3] Neuroscience[edit] Neural systems that regulate attention serve to attenuate awareness among complex animals whose central and peripheral nervous system provides more information than cognitive areas of the brain can assimilate. Basic awareness[edit] Basic awareness of one's internal and external world depends on the brain stem. Basic interests[edit] Other uses[edit] Related:  Organizational Level-Alignment

Intuition (philosophy) Intuition is a priori knowledge or experiential belief characterized by its immediacy. Beyond this, the nature of intuition is debated. Roughly speaking, there are two main views. They are: Intuitions are a priori. This view holds that distinctions are to be made between various sorts of intuition, roughly corresponding to their subject matter (see George Bealer). In the philosophy of Immanuel Kant, intuition is thought of as basic sensory information provided by the cognitive faculty of sensibility (equivalent to what might loosely be called perception). In contemporary analytic philosophy, appeals to our intuitions are an important method for testing claims. The metaphilosophical assumption that philosophy depends on intuitions has recently been challenged by some philosophers. Jump up ^ Immanuel Kant (1787) "Critique of Pure Reason", p35 et seq.

List of types of equilibrium This is a list of various types of equilibrium, the condition of a system in which all competing influences are balanced. Biology[edit] Equilibrioception, the sense of a balance present in human beings and animalsEquilibrium unfolding, the process of unfolding a protein or RNA molecule by gradually changing its environmentGenetic equilibrium, theoretical state in which a population is not evolvingHomeostasis, the ability of an open system, especially living organisms, to regulate its internal environmentPunctuated equilibrium, theory in evolutionary biologySedimentation equilibrium, analytical ultracentrifugation method for measuring protein molecular masses in solutionEquilibrium Theory (Island biogeography), MacArthur-Wilson theory explaining biodiversity character of ecological islands Physics[edit] Chemistry[edit] Economics[edit] Game theory[edit] Other[edit] External links[edit] Equilibrium article in Scholarpedia by Eugene Izhikevich

Qualia In philosophy, qualia (/ˈkwɑːliə/ or /ˈkweɪliə/; singular form: quale) are what some consider to be individual instances of subjective, conscious experience. The term "qualia" derives from the Latin neuter plural form (qualia) of the Latin adjective quālis (Latin pronunciation: [ˈkʷaːlɪs]) meaning "of what sort" or "of what kind"). Examples of qualia include the pain of a headache, the taste of wine, or the perceived redness of an evening sky. Daniel Dennett (b. 1942), American philosopher and cognitive scientist, regards qualia as "an unfamiliar term for something that could not be more familiar to each of us: the ways things seem to us".[2] Erwin Schrödinger (1887–1961), the famous physicist, had this counter-materialist take: The sensation of color cannot be accounted for by the physicist's objective picture of light-waves. Definitions[edit] Saturated colors are a commonly used example of a quale. There are many definitions of qualia, which have changed over time. Daniel Dennett[edit]

Open-mindedness Open-mindedness is receptiveness to new ideas. Open-mindedness relates to the way in which people approach the views and knowledge of others, and "incorporate the beliefs that others should be free to express their views and that the value of others’ knowledge should be recognized. Open-mindedness is generally considered an important personal attribute for effective participation in management teams and other groups.[5] According to What Makes Your Brain Happy and Why You Should Do the Opposite, closed-mindedness, or an unwillingness to consider new ideas, can result from the brain's natural dislike for ambiguity. References[edit] Jump up ^ Tjosvold, Dean; Poon, Margaret (September 1998). Further reading[edit] Mather Jr., F.

Risk Risk is the potential of losing something of value, weighed against the potential to gain something of value. Values (such as physical health, social status, emotional well being or financial wealth) can be gained or lost when taking risk resulting from a given action, activity and/or inaction, foreseen or unforeseen. Risk can also be defined as the intentional interaction with uncertainty. Risk perception is the subjective judgment people make about the severity of a risk, and may vary person to person. Any human endeavor carries some risk, but some are much riskier than others.[1] Definitions[edit] Firefighters at work Risk can be defined in a variety of ways. Basic definitions[edit] The probability of something happening multiplied by the resulting cost or benefit if it does. International Organization for Standardization[edit] The ISO 31000 (2009) / ISO Guide 73:2002 definition of risk is the 'effect of uncertainty on objectives'. Other[edit] History[edit] Practice areas[edit] Health[edit]

Envisioning Technology 2012 What is the visualization? Understanding where technology is heading is more than guesswork. Looking at emerging trends and research, one can predict and draw conclusions about how the technological sphere is developing, and which technologies should become mainstream in the coming years. Envisioning technology is meant to facilitate these observations by taking a step back and seeing the wider context. Who made this? Envisioning Technology is a technological trend forecasting firm headed by emerging technology strategist Michell Zappa. If you have any ideas, questions, complaints or suggestions, feel free to email us: mz@envisioningtech.com Technologies mentioned Follow the project This is the first in a series of projects related to the future of technology. License & credits

Sentience Philosophy and sentience[edit] In the philosophy of consciousness, sentience can refer to the ability of any entity to have subjective perceptual experiences, or as some philosophers refer to them, "qualia".[2] This is distinct from other aspects of the mind and consciousness, such as creativity, intelligence, sapience, self-awareness, and intentionality (the ability to have thoughts "about" something). Sentience is a minimalistic way of defining consciousness, which is otherwise commonly used to collectively describe sentience plus other characteristics of the mind. Some philosophers, notably Colin McGinn, believe that sentience will never be understood, a position known as "new mysterianism". Ideasthesia[edit] According to the theory of ideasthesia a sentient system has to have the capability to categorize and to create concepts. Indian religions[edit] Eastern religions including Hinduism, Buddhism, Sikhism, and Jainism recognize non-humans as sentient beings. Science fiction[edit]

Nature Nature, in the broadest sense, is equivalent to the natural, physical, or material world or universe. "Nature" refers to the phenomena of the physical world, and also to life in general. It ranges in scale from the subatomic to the cosmic. The study of nature is a large part of science. Although humans are part of nature, human activity is often understood as a separate category from other natural phenomena. Within the various uses of the word today, "nature" often refers to geology and wildlife. Earth[edit] Main articles: Earth and Earth science View of the Earth, taken in 1972 by the Apollo 17astronaut crew. The atmospheric conditions have been significantly altered from the original conditions by the presence of life-forms,[7] which create an ecological balance that stabilizes the surface conditions. Geology[edit] Geology is the science and study of the solid and liquid matter that constitutes the Earth. Geological evolution[edit] Historical perspective[edit] Water on Earth[edit] Media:

Relativism Forms of relativism[edit] Anthropological versus philosophical relativism[edit] Anthropological relativism refers to a methodological stance, in which the researcher suspends (or brackets) his or her own cultural biases while attempting to understand beliefs and behaviors in their local contexts. This has become known as methodological relativism, and concerns itself specifically with avoiding ethnocentrism or the application of one's own cultural standards to the assessment of other cultures.[3] This is also the basis of the so-called "emic" and "etic" distinction, in which: Philosophical relativism, in contrast, asserts that the truth of a proposition depends on the metaphysical, or theoretical frame, or the instrumental method, or the context in which the proposition is expressed, or on the person, groups, or culture who interpret the proposition.[4] Descriptive versus normative relativism[edit] Postmodernism and relativism[edit] Related and contrasting positions[edit] Leo XIII[edit]

Decision making Sample flowchart representing the decision process to add a new article to Wikipedia. Decision-making can be regarded as the cognitive process resulting in the selection of a belief or a course of action among several alternative possibilities. Every decision-making process produces a final choice that may or may not prompt action. Overview[edit] Edit human performance with regard to decisions has been the subject of active research from several perspectives: Psychological: examining individual decisions in the context of a set of needs, preferences and values the individual has or seeks.Cognitive: the decision-making process regarded as a continuous process integrated in the interaction with the environment.Normative: the analysis of individual decisions concerned with the logic of decision-making and rationality and the invariant choice it leads to.[1] Decision-making can also be regarded as a problem-solving activity terminated by a solution deemed to be satisfactory. Problem analysis

Morality Allegory with a portrait of a Venetian senator (Allegory of the morality of earthly things), attributed to Tintoretto, 1585 Morality (from the Latin moralitas "manner, character, proper behavior") is the differentiation of intentions, decisions, and actions between those that are "good" (or right) and those that are "bad" (or wrong).[citation needed] Morality can be a body of standards or principles derived from a code of conduct from a particular philosophy, religion, culture, etc., or it can derive from a standard that a person believes should be universal.[1] Morality may also be specifically synonymous with "goodness" or "rightness." Immorality is the active opposition to morality (i.e. opposition to that which is good or right), while amorality is variously defined as an unawareness of, indifference toward, or disbelief in any set of moral standards or principles.[2][3][4] Philosophy[edit] Morality and ethics[edit] Descriptive and normative[edit] Realism and anti-realism[edit]

Thought Thought can refer to the ideas or arrangements of ideas that result from thinking, the act of producing thoughts, or the process of producing thoughts. Despite the fact that thought is a fundamental human activity familiar to everyone, there is no generally accepted agreement as to what thought is or how it is created. Thoughts are the result or product of spontaneous act of thinking. Because thought underlies many human actions and interactions, understanding its physical and metaphysical origins, processes, and effects has been a longstanding goal of many academic disciplines including artificial intelligence, biology, philosophy, psychology, and sociology. Thinking allows humans to make sense of, interpret, represent or model the world they experience, and to make predictions about that world. Etymology and usage[edit] The word thought comes from Old English þoht, or geþoht, from stem of þencan "to conceive of in the mind, consider".[1] The word “thought” may mean[2],:[3] Theories[edit]