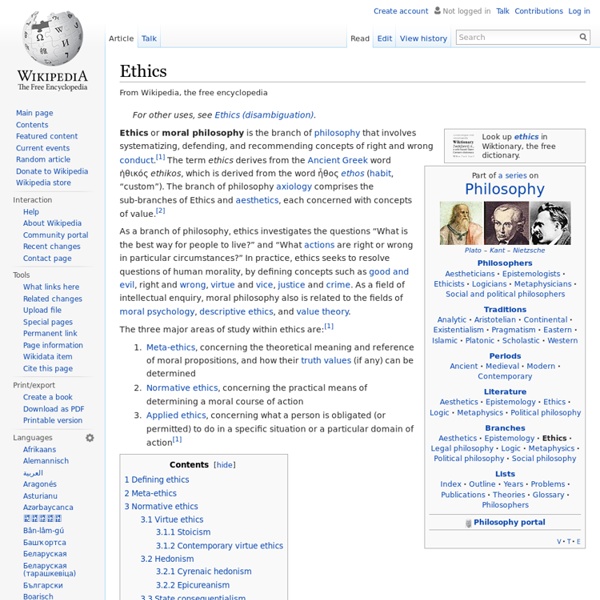 The three major areas of study within ethics are:[1] Meta-ethics, concerning the theoretical meaning and reference of moral propositions, and how their truth values (if any) can be determinedNormative ethics, concerning the practical means of determining a moral course of actionApplied ethics, concerning what a person is obligated (or permitted) to do in a specific situation or a particular domain of action[1] Defining ethics[edit] The word "ethics" in English refers to several things.[6] It can refer to philosophical ethics—a project that attempts to use reason in order to answer various kinds of ethical questions.[citation needed] It can also be used to describe a particular person's own, idiosyncratic principles or habits.[7] For example: "Joe has good ethics." [edit] Main article: Meta-ethics Meta-ethics has always accompanied philosophical ethics. The ontology of ethics is about value-bearing things or properties, i.e. the kind of things or stuff referred to by ethical propositions.

Related:  Kant - Fundamental principles of the metaphysics of morals • The problems with philosophy

Definition of apodictic in English by Oxford Dictionaries adjective formal Clearly established or beyond dispute. ‘Not all of these nine statements are totally independent, and the list makes no claim for apodictic completeness or ultimate correctness.’ ‘Both these types of phenomena are apodeictic realities.’ ‘He sought a new and apodictic foundation of human knowledge based on the liberation of man from the ancient and medieval tradition of the West.’

Faith Etymology[edit] The English word is thought to date from 1200–50, from the Middle English feith, via Anglo-French fed, Old French feid, feit from Latin fidem, accusative of fidēs (trust), akin to fīdere (to trust).[7] Religions[edit] Bahá'í Faith[edit] In the Bahá'í Faith, faith is ultimately the acceptance of the divine authority of the Manifestations of God.[8] In the religion's view, faith and knowledge are both required for spiritual growth.[8] Faith involves more than outward obedience to this authority, but also must be based on a deep personal understanding of religious teachings.[8] By faith is meant, first, conscious knowledge, and second, the practice of good deeds.[9]

Apodicticity Propositions that are demonstrably, necessarily or self-evidently true "Apodictic" or "apodeictic" (Ancient Greek: ἀποδεικτικός, "capable of demonstration") is an adjectival expression from Aristotelean logic that refers to propositions that are demonstrably, necessarily or self-evidently true.[1] Apodicticity or apodixis is the corresponding abstract noun, referring to logical certainty. Apodictic propositions contrast with assertoric propositions, which merely assert that something is (or is not) true, and with problematic propositions, which assert only the possibility of something being true. Apodictic judgments are clearly provable or logically certain. For instance, "Two plus two equals four" is apodictic.

Intuition A phrenological mapping[1] of the brain – phrenology was among the first attempts to correlate mental functions with specific parts of the brain Intuition is the ability to acquire knowledge without recourse to conscious reasoning.[2][3] Different fields use the word "intuition" in very different ways, including but not limited to: direct access to unconscious knowledge; unconscious cognition; inner sensing; inner insight to unconscious pattern-recognition; and the ability to understand something instinctively, without any need for conscious reasoning.[4][5] The word intuition comes from the Latin verb intueri translated as "consider" or from the late middle English word intuit, "to contemplate".[2] Philosophy[edit] Both Eastern and Western philosophers have studied the concept in great detail. Philosophy of mind deals with the concept.

Kant: Fundamental Principles of the Metaphysic of Morals Immanuel Kant If we have hitherto drawn our notion of duty from the common use of our practical reason, it is by no means to be inferred that we have treated it as an empirical notion. On the contrary, if we attend to the experience of men's conduct, we meet frequent and, as we ourselves allow, just complaints that one cannot find a single certain example of the disposition to act from pure duty. Although many things are done in conformity with what duty prescribes, it is nevertheless always doubtful whether they are done strictly from duty, so as to have a moral worth. Opinion An opinion is a judgment, viewpoint, or statement that is not conclusive. Definition[edit] A given opinion may deal with subjective matters in which there is no conclusive finding, or it may deal with facts which are sought to be disputed by the logical fallacy that one is entitled to their opinions. Distinguishing fact from opinion is that facts are verifiable, i.e. can be agreed to by the consensus of experts. An example is: "United States of America was involved in the Vietnam War," versus "United States of America was right to get involved in the Vietnam War". An opinion may be supported by facts and principles, in which case it becomes an argument.

Synthetic Proposition Any proposition whose truth is dependent on the relationship between the content of the proposition and the world is labeled Synthetic. Analytic propositions are propositions that are true in virtue of the meaning of the proposition. For example: Bachelors are unmarried men. - Analytic Kato is a dog. - Synthetic Read more about the analytic/synthetic distinction. Self-reflection This penultimate scene of the Admonitions Scroll shows a palace lady sitting in quiet contemplation, presumably following the admonitions in the accompanying lines:[1] "Therefore I say: Be cautious and circumspect in all you do, and from this good fortune will arise. Calmly and respectfully think about your actions, and honor and fame will await you." Human self-reflection is the capacity of humans to exercise introspection and the willingness to learn more about their fundamental nature, purpose and essence. The earliest historical records demonstrate the great interest which humanity has had in itself. Human self-reflection is related to the philosophy of consciousness, the topic of awareness, consciousness in general and the philosophy of mind.

René Descartes Descartes laid the foundation for 17th-century continental rationalism, later advocated by Baruch Spinoza and Gottfried Leibniz, and opposed by the empiricist school of thought consisting of Hobbes, Locke, Berkeley, and Hume. Leibniz, Spinoza and Descartes were all well versed in mathematics as well as philosophy, and Descartes and Leibniz contributed greatly to science as well. His best known philosophical statement is "Cogito ergo sum" (French: Je pense, donc je suis; I think, therefore I am), found in part IV of Discourse on the Method (1637 – written in French but with inclusion of "Cogito ergo sum") and §7 of part I of Principles of Philosophy (1644 – written in Latin).

The Analytic/Synthetic Distinction 1. The Intuitive Distinction Compare the following two sets of sentences: Some doctors that specialize on eyes are rich. Some ophthalmologists are rich. Semiotics The study of signs and sign processes Semiotics is frequently seen as having important anthropological and sociological dimensions; for example, the Italian semiotician and novelist Umberto Eco proposed that every cultural phenomenon may be studied as communication.[1] Some semioticians focus on the logical dimensions of the science, however. They examine areas belonging also to the life sciences—such as how organisms make predictions about, and adapt to, their semiotic niche in the world (see semiosis). In general, semiotic theories take signs or sign systems as their object of study: the communication of information in living organisms is covered in biosemiotics (including zoosemiotics and phytosemiotics). Semiotics is not to be confused with the Saussurean tradition called semiology, which is a subset of semiotics.[2][3]

The Definition of Analytic vs. Synthetic Statements Analytic and synthetic are distinctions between types of statements which was first described by Immanuel Kant in his work "Critique of Pure Reason" as part of his effort to find some sound basis for human knowledge. According to Kant, if a statement is analytic, then it is true by definition. Another way to look at it is to say that if the negation of a statement results in a contradiction or inconsistency, then the original statement must be an analytic truth. Examples include: Bachelors are unmarried.Daisies are flowers.

Most regulations and procedural controls that relate to human research have originated in public scandals which have required laws to be instigated to help minimise risk to human participants. The vast majority of such scandals have been in the healthcare arena but laws now in place can have an impact on other research areas. Advances in communications and information technology, for instance, have created the need for safeguards of personal data and privacy. by raviii Jul 16