Join the fight against extreme poverty 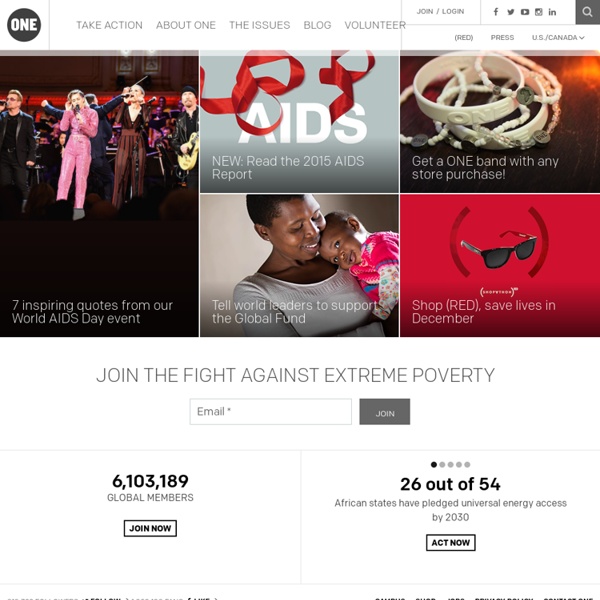 Feel miserable working in a cubicle or living in a boring town? The Internet has revolutionized the term ‘work’ today, bringing new opportunities and employment that didn’t exist until recently. For many, the Internet is an opportunity to combine work and traveling the world. The term ‘digital nomad’ is frequently overused and often simply means hacking around in cheap accommodation with a small level of income to keep you going. But, there are some folks out there who have shown that you can combine a career with the freedom to travel on your own schedule. Social Media for Social Good Organization: Big Cat RescueOrganization Size: 125 exotic cats, 9 paid staff, 107 volunteers, 80,000 supportersName: Carol BaskinTitle: CEO Website: BigCatRescue.orgBlog: BigCatRescue.org/BlogFacebook: facebook.com/BigCatRescueTwitter: twitter.com/BigCatRescueYouTube: youtube.com/BigCatRescuePosterous: BigCatRescue.posterous.com 1. What was the very first social media tool your organization utilized, and when? Care2.com Aug 14, 2000: my.care2.com/savethecats 2. What social media tools are you currently utilizing?

RT @JeromePineau: Autodesk’s Jerome Pineau: Why Great Service Is Social As Autodesk‘s social media strategist, Jerome Pineau is no stranger to the inner workings of Twitter, Facebook, LinkedIn and the like — he leads the 3D design software maker’s efforts on all social channels. But why is social media so critical to the success of Autodesk and its service department? We spoke with Pineau about the use cases, benefits and future of social media in relation to service organizations. Why would a service firm want to turn to social media? Isn’t it all just a big distraction from what’s actually important?

I've seen it happen too many times. A writer is invited to guest post and they gain no headline, let alone a byline. Or it’s buried in the text below where it’s never seen by the Google gods who can bring light to this guest author. After all, isn't the point of guest posting to bring recognition to the author? Murphy's law Murphy's law is an adage or epigram that is typically stated as: Anything that can go wrong will go wrong. History[edit] The perceived perversity of the universe has long been a subject of comment, and precursors to the modern version of Murphy's law are not hard to find. Recent significant research in this area has been conducted by members of the American Dialect Society. ADS member Stephen Goranson has found a version of the law, not yet generalized or bearing that name, in a report by Alfred Holt at an 1877 meeting of an engineering society.

Discover Electronics Kit [2.0] ID: 487 - $49.95 Discover Electronics Kit contains everything you need to learn the basics of electronics and make your own projects. It contains the most common electronics components as well as a prototyping breadboard for you to get started right away. Easy full color diagrams teach you how to bring your own ideas to life.The Discover electronics kit uses standard components. Polycentrism Polycentrism is the principle of organization of a region around several political, social or financial centres. Examples of polycentric cities include the Ruhr area in Germany, and Stoke-on-Trent in the UK. Today, the former is a large city that grew from a dozen smaller cities, the latter a federation of six smaller towns. As a result, these "cities" have no single centre, but several.

Why The Last Six Months In Social Media Are Like St. Elmo’s Fire These are both St. Elmo’s Fire. One is a flaming ball of gas that misleads people and the other is a weather phenomenon. Social media finally graduated, moved into its first apartment, and wants to eat something besides ramen noodles for the rest of it’s life. Envisioning Technology 2012 What is the visualization? Understanding where technology is heading is more than guesswork. Looking at emerging trends and research, one can predict and draw conclusions about how the technological sphere is developing, and which technologies should become mainstream in the coming years. Envisioning technology is meant to facilitate these observations by taking a step back and seeing the wider context. By speculating about what lies beyond the horizon we can make better decisions of what to create today. Who made this?

The Google Glass feature no one is talking about — Creative Good (Also: en français, en español, 简体中文, 繁體中文, На русском, in het nederlands, em Português) Google Glass might change your life, but not in the way you think. There’s something else Google Glass makes possible that no one – no one – has talked about yet, and so today I’m writing this blog post to describe it.

Awareness Concept[edit] Awareness is a relative concept. An animal may be partially aware, may be subconsciously aware, or may be acutely unaware of an event.