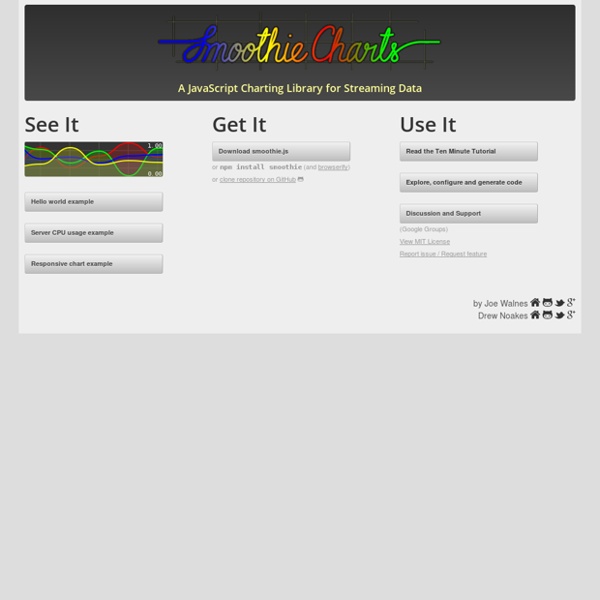 birdeye - Information Visualization and Visual Analytics Library Overview BirdEye is a community project to advance the design and development of a comprehensive open source information visualization and visual analytics library for Adobe Flex. The actionscript-based library enables users to create multi-dimensional data visualization interfaces for the analysis and presentation of information. The project is based on development and the integration/adoption of related open source libraries (see credits and attributions). Update A "next generation" development of BirdEye is underway. Contribute Want to contribute? Questions and Discussion You are invited to join the Group Support site to pose questions and discuss implementation of the library.

A Gentle Introduction to Monads in JavaScript By Sean Voisen Monads: they’re incredibly useful, and also a little intimidating. Beginner functional programmers often cringe when they hear the term. JavaScript legend Douglas Crockford once said that monads are cursed – that once you understand monads for yourself, you lose the ability to explain them to others. In the programming language F#, monads are called “computational expressions” mostly so people aren’t scared away. But I think all this fear and mysticism around the dreaded “M-word” need not be so. If you’ve been putting off learning about monads – or maybe have never even heard of them until now – then this post is for you. If you’re a seasoned developer, chances are you have already used monads in your daily practice without even realizing it. On occasion, I will reference similarities between the JavaScript example and its counterparts in the programming language Haskell. Maybe We Have a Problem All those null checks are fairly ugly. Maybe We Have a Solution maybe(def, fn)

Create An Animated Bar Graph With HTML, CSS And jQuery Smashing Coding Advertisement Today, too many websites are still inaccessible. In our new book Inclusive Design Patterns, we explore how to craft flexible front-end design patterns and making future-proof and accessible interfaces without extra effort. Hardcover, 312 pages. Get the book now → People in boardrooms across the world love a good graph. How can we as Web designers get in on all of this hot graph action? There are pros and cons to the wide range of resources available to us, but this tutorial will not explore them all. What Are We Making? We’re making this4. A progress bar that indicates how long until the end of all humanity in the event of a zombie plague;A graph indicating the decline in safe outdoor activities during a zombie plague;A frighteningly similar graph indicating the decline in manners during a zombie plague;The increase of people who were unaware of the zombie plague because they were sharing with all of their now-deceased friends on Facebook what they did on FarmVille5. Quick!

Examples arbor.js JavaScript Summit 2013 - November 19-November 21, 2013 You’re building the next growth app and you’re heads down on the killer feature, but have you thought about how to authenticate your humans? If you’re thinking “I’ll just have them log in with Twitter” or “How hard could adding a username and password be?” then this talk is for you. Identity, or authenticating humans, is a hard problem and often it’s the most common reason inbound customers drop off the funnel. This talk will cover all aspects of identity, including building usable login forms in bootstrap, securing session tokens, handling passwords properly, one-time-passwords, safe error messages, a primer on preventing fraud, an intro to compliance, and the holy grail – authenticating without passwords at all. I hope you take away that identity is more than a username and password, and often identity is the first time your customers introduce themselves. Joe Schulman is the cofounder of UserNest, a private-label identity service.

35 JavaScript Chart and Graph Libraries for Developers A chart is a graphical representation of data, in which “the data is represented by symbols, such as bars in a bar chart, lines in a line chart, or slices in a pie chart”. Almost every development or project management team requires charts or graphs to understand and visualize the complex data and workflow for their web applications. Visualizing charts can help you to understand complex data easily which may results in improved productivity and reliability for your web applications & projects. An easy way to create charts and graphs for such web projects and applications is JavaScript Chart and Graph Libraries. In this article we have compiled a list of Top 35 JavaScript chart and Graph libraries that suit different needs from simple charts to high complex charts. 1. FusionCharts is the oldest member in the world of JavaScript charting libraries and is still going strong. 2. Ember Charts is a charting library built with the Ember.js and d3.js frameworks. 3. 4. 5. xCharts 6. 7. 8. 9. 10.

Protovis Protovis composes custom views of data with simple marks such as bars and dots. Unlike low-level graphics libraries that quickly become tedious for visualization, Protovis defines marks through dynamic properties that encode data, allowing inheritance, scales and layouts to simplify construction. Protovis is free and open-source, provided under the BSD License. It uses JavaScript and SVG for web-native visualizations; no plugin required (though you will need a modern web browser)! Protovis is no longer under active development.The final release of Protovis was v3.3.1 (4.7 MB). This project was led by Mike Bostock and Jeff Heer of the Stanford Visualization Group, with significant help from Vadim Ogievetsky. Updates June 28, 2011 - Protovis is no longer under active development. September 17, 2010 - Release 3.3 is available on GitHub. May 28, 2010 - ZOMG! October 1, 2009 - Release 3.1 is available, including minor bug fixes. April 9, 2009 - First release on Google Code. Getting Started