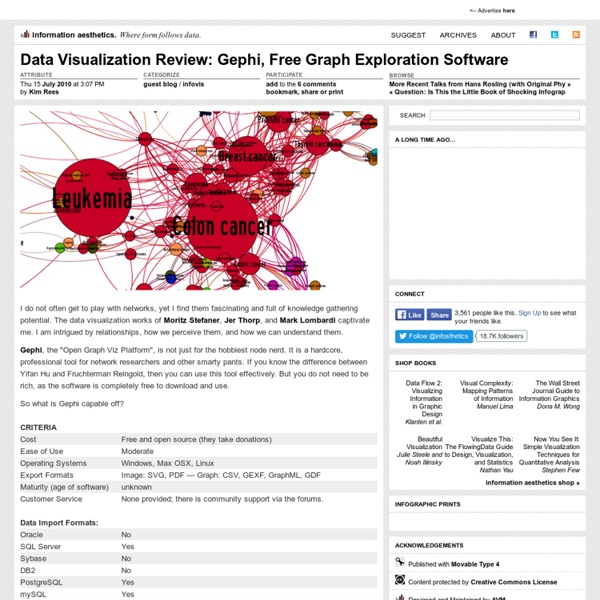 I do not often get to play with networks, yet I find them fascinating and full of knowledge gathering potential. The data visualization works of Moritz Stefaner, Jer Thorp, and Mark Lombardi captivate me. I am intrigued by relationships, how we perceive them, and how we can understand them. Gephi, the "Open Graph Viz Platform", is not just for the hobbiest node nerd. It is a hardcore, professional tool for network researchers and other smarty pants. So what is Gephi capable off? Gephi interface displaying airline traffic data. Pros — Options! Cons — Interface is a bit cluttered. Main interface displaying the Diseasome data. Review Overall, Gephi is a useful and interesting tool. There are some plugins available for Gephi that extend the functionality. The only thing keeping Gephi from being a professional grade tool is its bugginess and lack of documentation. Graph of Minard's data using Gephi and the GeoLayout plugin. For the Purists Gephi is a purist's delight. Related:  Data visualisation tools

Peltier Tech Blog Constable Henry: Just a moment, sir. I know everyone in this neighborhood, but I’ve never seen your face before. Can you account for yourself? Freddy: Yes, I am Dr. Frederick Fronkonsteen, newly arrived from America. by The FrankensTeam This guest post is from the E90E50 FrankensTeam, i.e., Roberto Mensa, Kris Szabó, and Gábor Madács. While I was reading Jon’s work using VBA Approaches to Plotting Gaps in Excel Charts I started to think, because I felt there had to be another solution which was waiting to be discovered… Jon provided two different VBA routines as a solution for the problem: one changes the chart series formatting, the other changes the underlying data. Some time ago I realized that it is possible to use union of ranges in chart series. Now, a few months later, thinking about the gap problem… Eureka! The union of separate ranges could be a solution, especially if we can build it up using the UDF within a named formula! Let us explain how it could work. The idea Formula solution

The Best Tools for Visualization Visualization is a technique to graphically represent sets of data. When data is large or abstract, visualization can help make the data easier to read or understand. There are visualization tools for search, music, networks, online communities, and almost anything else you can think of. Whether you want a desktop application or a web-based tool, there are many specific tools are available on the web that let you visualize all kinds of data. Visualize Social Networks Last.Forward: Thanks to Last.fm's new widget gallery, you can now explore a wide selection of extras to extend your Last.fm experience. Last Forward Friends Sociomap: Friends Sociomap is another Last.fm tools that generates a map of the music compatibility between you and your Last.fm friends. Fidg't: Fidg't is a desktop application that gives you a way to view your networks tagging habits. Fidg't The Digg Tools: One more: Digg Radar. YouTube: You can discover related videos using YouTube's visualizations. Visualize Music Amazon

About "Functional visualizations are more than innovative statistical analyses and computational algorithms. They must make sense to the user and require a visual language system that uses colour, shape, line, hierarchy and composition to communicate clearly and appropriately, much like the alphabetic and character-based languages used worldwide between humans." Matt Woolman Digital Information Graphics Goal VisualComplexity.com intends to be a unified resource space for anyone interested in the visualization of complex networks. The project's main goal is to leverage a critical understanding of different visualization methods, across a series of disciplines, as diverse as Biology, Social Networks or the World Wide Web. Not all projects shown here are genuine complex networks, in the sense that they aren’t necessarily at the edge of chaos, or show an irregular and systematic degree of connectivity. How it started Complex Networks Complexity is a challenge by itself. About the author

The Best And Worst Places In The World To Be A Woman It’s not particularly easy being a woman in most countries; even in areas where women are presumably seen as equal to men, their pay is often lacking. But that’s just one part of the problem. In some places, women receive minimal education, have a short life expectancy, are likely to lose a child at some point, and don’t have easy access to medical treatment. In its annual State of the World’s Mothers report, Save the Children compared 165 countries (the majority in the developing world) on progress in maternal health, economic status, education, contraception use, and more. If you don’t feel like reading through the whole report, The National Post has laid out the findings in an infographic (click to make larger). Unsurprisingly, the Scandinavian countries that often top quality of life rankings are tops, with longer life expectancies, years in school, more contraception use, a higher percentage of government seats held by women, and a higher ratio of female to male earned income.

Gephi, an open source graph visualization and manipulation software SWF Charts > Introduction XML/SWF Charts is a simple, yet powerful tool to create attractive charts and graphs from XML data. Create an XML source to describe a chart, then pass it to this tool's flash file to generate the chart. The XML source can be prepared manually, or generated dynamically using any scripting language (PHP, ASP, CFML, Perl, etc.) XML/SWF Charts makes the best of both the XML and SWF worlds. XML provides flexible data generation, and Flash provides the best graphic quality. Features: Quick generation of charts and graphs from static or dynamic data (any scripting language) Full updates and data streaming without reloading the web page. Testimonials I just wanted to pass along how well your script worked for our stock performance page. Good work! This is amazing software. Just want to thank you for this wonderful upgrade. I purchased your product a couple days ago and first had time to sit down and work with it this morning. Wow, you are the best! Thanks for your great script. THIS ROCKS!

Protovis Protovis composes custom views of data with simple marks such as bars and dots. Unlike low-level graphics libraries that quickly become tedious for visualization, Protovis defines marks through dynamic properties that encode data, allowing inheritance, scales and layouts to simplify construction. Protovis is free and open-source, provided under the BSD License. It uses JavaScript and SVG for web-native visualizations; no plugin required (though you will need a modern web browser)! Protovis is no longer under active development.The final release of Protovis was v3.3.1 (4.7 MB). This project was led by Mike Bostock and Jeff Heer of the Stanford Visualization Group, with significant help from Vadim Ogievetsky. Updates June 28, 2011 - Protovis is no longer under active development. September 17, 2010 - Release 3.3 is available on GitHub. May 28, 2010 - ZOMG! October 1, 2009 - Release 3.1 is available, including minor bug fixes. April 9, 2009 - First release on Google Code. Getting Started