Scaly-foot gastropod, the metal-coated bastard of the sea. - Album on Imgur. Qj0DvUH.jpg (JPEG Image, 533 × 800 pixels) Strange Animals sur Twitter : "Lecythifera treehopper. 16 of the most magnificent trees in the World - Album on Imgur. I started taking my camera to work. Researchers discover Asian fanged frog that don't lay eggs but gives birth to tadpoles. There are over 6,000 frog species in the world and almost all of them are known to spawn or lay eggs that later develop into tadpoles and them metamorphose into froglets – with a few exceptions of course – but researchers from the University of California in Berkeley have discovered a new species of Asian Fanged frog that gives birth to live tadpoles directly. 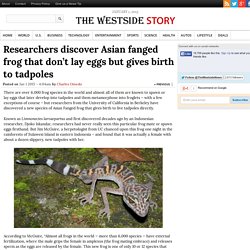 Known as Limnonectes larvaepartus and first discovered decades ago by an Indonesian researcher, Djoko Iskandar, researchers had never really seen this particular frog mate or spawn eggs firsthand. But Jim McGuire, a herpetologist from UC chanced upon this frog one night in the rainforests of Sulawesi Island in eastern Indonesia – and found that it was actually a female with about a dozen slippery, new tadpoles with her. Frogs all over the world are known to have very unusual behaviors and characteristics when it comes to creating offsprings. k46olqp.jpg (JPEG Image, 720 × 960 pixels) Sea-anemone02-crab_17643_600x450.jpg (JPEG Image, 600 × 450 pixels)

The QI Elves on Twitter: "This is the gas flame nudibranch. It lives off the southern coast of South Africa…... HonbLAL.jpg (JPEG Image, 614 × 870 pixels) 5EUV6jC.jpg (JPEG Image, 800 × 800 pixels) Before & After. Interesting looking moth I found in my Garage. Thomas Shahan on Twitter: "Back from Belize! Check out some quick edits from our workshop here: 20 Vivid Hummingbird Close-ups Reveal Their Incredible Beauty.

When it comes to birds, the terms “strong” or “beautiful” might inspire images of fierce eagles or decadent tropical parrots. 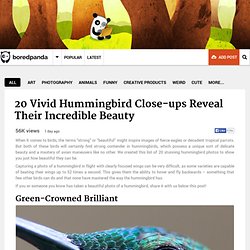 But both of these birds will certainly find strong contender in hummingbirds, which possess a unique sort of delicate beauty and a mastery of avian maneuvers like no other. We created this list of 20 stunning hummingbird photos to show you just how beautiful they can be. Capturing a photo of a hummingbird in flight with clearly focused wings can be very difficult, as some varieties are capable of beating their wings up to 52 times a second. This gives them the ability to hover and fly backwards – something that few other birds can do and that none have mastered the way the hummingbird has. If you or someone you know has taken a beautiful photo of a hummingbird, share it with us below this post! 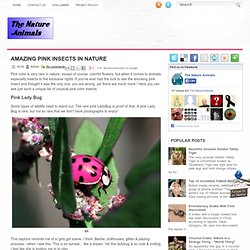 If you've ever had the luck to see the shocking pink insect and thought it was the only one, you are wrong, yet there are much more.! Here you can see just such a unique list of unusual pink color insects. Some types of wildlife need to stand out. The rare pink LadyBug is proof of that. A pink Lady Bug is rare, but not so rare that we don't have photographs to enjoy! This capture reminds me of a 'girly girl scene. Ladybugs, also called lady beetles or ladybird beetles, are actually beetles in the Coleoptera family Coccinellidae. Pink Katydid link First discovered in 1887, TreeHugger argues you'd be more likely to spot a unicorn in the wild than one of these precious hot pink critters, especially given only one in 500 have this fluorescent glow. 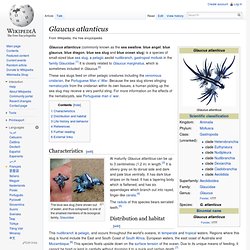 Because the sea slug stores stinging nematocysts from the cnidarian within its own tissues, a human picking up the sea slug may receive a very painful sting. For more information on the effects of the nematocysts, see Portuguese man o' war. Characteristics[edit] The blue sea slug (here shown out of water, and thus collapsed) is one of the smallest members of its biological family, Glaucidae At maturity Glaucus atlanticus can be up to 3 centimetres (1.2 in) in length.[3] It is silvery grey on its dorsal side and dark and pale blue ventrally.

The radula of this species bears serrated teeth.[5] Distribution and habitat[edit] This nudibranch is pelagic, and occurs throughout the world's oceans, in temperate and tropical waters. Life history and behavior[edit] G. atlanticus is able to feed on Physalia physalis due to its immunity to the venomous nematocysts. References[edit]