Kamy714 sur Twitter : "Found a praying mantis on today's hike. #nature... Misconception1. Tips and strategies for teaching the nature and process of science. “The” Scientific Method versus Real Science. “The” Scientific Method versus Real ScienceJohn Denker 1 Overview When sensible people speak of «the scientific method», what they really mean is something quite grand, covering a range of ideas including: How science is done.The underlying principles of science.The nature of science.The character of physical law.1... or something like that. 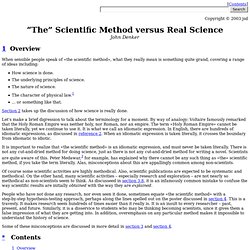 Section 2 takes up the discussion of how science is really done. Let’s make a brief digression to talk about the terminology for a moment. It is important to realize that «the scientific method» is an idiomatic expression, and must never be taken literally. Of course some scientific activities are highly methodical. People who have not done any research, nor even seen it done, sometimes equate «the scientific method» with a step-by-step hypothesis-testing approach, perhaps along the lines spelled out on the poster discussed in section 4. Some of these misconceptions are discussed in more detail in section 3 and section 4. * Contents 1 Overview 1. 2. 3. 4. Position Statement: The Nature of Science.

Preamble All those involved with science teaching and learning should have a common, accurate view of the nature of science. 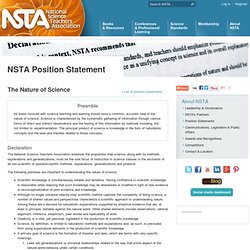 Science is characterized by the systematic gathering of information through various forms of direct and indirect observations and the testing of this information by methods including, but not limited to, experimentation. The principal product of science is knowledge in the form of naturalistic concepts and the laws and theories related to those concepts. Declaration The National Science Teachers Association endorses the proposition that science, along with its methods, explanations and generalizations, must be the sole focus of instruction in science classes to the exclusion of all non-scientific or pseudoscientific methods, explanations, generalizations and products. 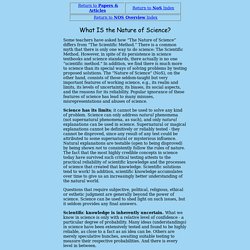 Some teachers have asked how “The Nature of Science” differs from “The Scientific Method.” There is a common myth that there is only one way to do science: The Scientific Method. However, in spite of its persistence in science textbooks and science standards, there actually is no one “scientific method. " In addition, we find there is much more to science than its special ways of solving problems by testing proposed solutions.

The “Nature of Science” (NoS), on the other hand, consists of those seldom-taught but very important features of working science, e.g., its realm and limits, its levels of uncertainty, its biases, its social aspects, and the reasons for its reliability. Science has its limits; it cannot be used to solve any kind of problem. Questions that require subjective, political, religious, ethical or esthetic judgment are generally beyond the power of science. Barbie Bungee. Get students' interest by asking, "Do you think the length of the cord and the size of the person matters when bungee jumping? 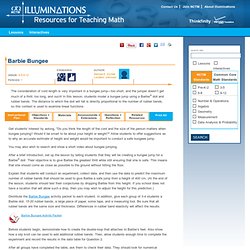 Would it be smart to lie about your height or weight? " Allow students to offer suggestions as to why an accurate estimate of height and weight would be important to conduct a safe bungeee jump. You may also wish to search and show a short video about bungee jumping. After a brief introduction, set up the lesson by telling students that they will be creating a bungee jump for a Barbie® doll. Their objective is to give Barbie the greatest thrill while still ensuring that she is safe. Explain that students will conduct an experiment, collect data, and then use the data to predict the maximum number of rubber bands that should be used to give Barbie a safe jump from a height of 400 cm. Distribute the Barbie Bungee activity packet to each student. Before students begin, demonstrate how to create the double‑loop that attaches to Barbie’s feet.

Questions for Students 1. Controlled Experiments. Terminology: What Scientists Mean by “Fact,” “Hypothesis,” “Theory,” and “Law” « Exposing PseudoAstronomy. Introduction I’ve decided to write this post so that I have something to refer to and don’t have to constantly re-define these words: Fact, Hypothesis, Theory, and Law. 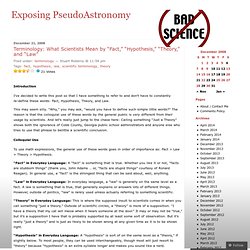 This may seem silly. “Why,” you may ask, “would you have to define such simple little words?” The reason is that the colloquial use of these words by the general public is very different from their usage by scientists. And let’s really just jump to the chase here: Calling something “Just a Theory” shows both the ignorance of Cobb County, Georgia public school administrators and anyone else who tries to use that phrase to belittle a scientific conclusion. Colloquial Use To use math expressions, the general use of these words goes in order of importance as: Fact > Law > Theory > Hypothesis. “Fact” in Everyday Language: A “fact” is something that is true. “Law” in Everyday Language: In everyday language, a “law” is generally on the same level as a fact. 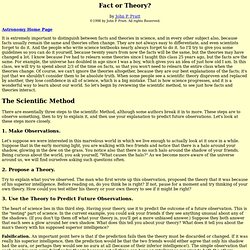 By John P. Pratt©1998 by John P. Pratt. All rights Reserved. Astronomy Home Page It is extremely important to distinguish between facts and theories in science, and in every other subject also, because facts usually remain the same and theories often change. Scientific Explanations. As diverse as sciences are, all scientific explanations have a lot in common. 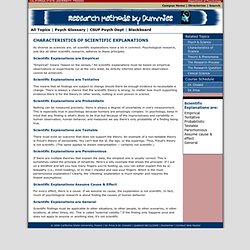 Psychological research, just like all other scientific research, adheres to these principles. Scientific Explanations are Empirical "Empirical" means "based on the senses. " All scientific explanations must be based on empirical observations or experiments (or at the very least, be directly inferred when direct observation cannot be achieved). Scientific Explanations are Tentative This means that all findings are subject to change should there be enough evidence to necessitate a change.