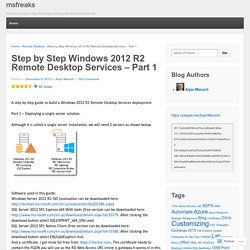 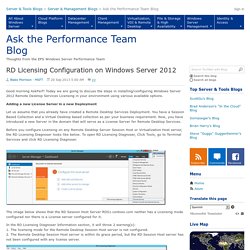 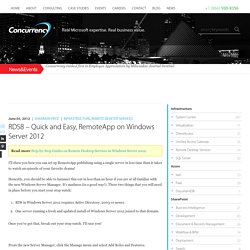 Honestly, you should be able to hammer this out in less than an hour if you are at all familiar with the new Windows Server Manager. It’s madness (in a good way!). There two things that you will need in place before you start your stop watch: RDS in Windows Server 2012 requires Active Directory, 2003 or newer.One server running a fresh and updated install of Windows Server 2012 joined to that domain. Once you’ve got that, break out your stop watch. From the new Server Manager, click the Manage menu and select Add Roles and Features. One of many new features that the new Server Manager offers is the introduction of scenario-based installation. The local server you’re connected to should be added to the Selected list by default. After the reboot, log back into the server and the Server Manager should resume to show you the status: Succeeded! N’joy! Step by Step Windows 2012 R2 Remote Desktop Services – Part 1. Distribution of Remote Apps and desktops in Windows Server 2012. 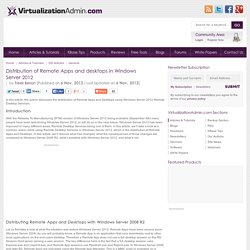 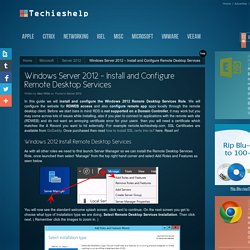 We will configure the website for RDWEB access and also configure remote app apps locally through the remote desktop client. Before we start bare in mind RDS is not supported on a Domain Controller, it may work but you may come across lots of issues while installing, also if you plan to connect to applications with the remote web site (RDWEB) and do not want an annoying certificate error for your users then you will need a certificate which matches the A Record you want to hit externally. 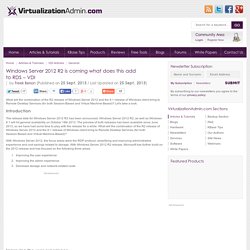 Manesiotish replied on Fri, Oct 24 2014 4:46 PM Findings: Currently, Windows 2012 R2 AD DS role and RDS With Broker services can only seem to coexist properly in a new domain not an existing domain. 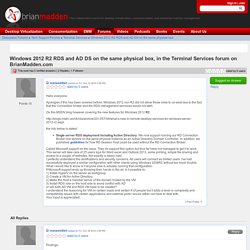 Any attempt to add to an existing domain causes internal database user access denied issues and any attempt to adjust rights and circumvent is dubious at best. The escalation technician said it best. Out of 50 clients that want to do this, they end up not being able to help 5 right off the bat for whatever reason. What's New in Remote Desktop Services in Windows Server. Pubblicato: giugno 2013 Aggiornamento: giugno 2013. 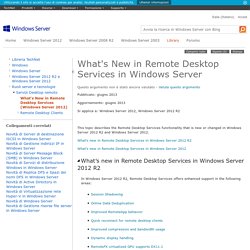 Remote Desktop Services in Windows Server 2012/2012 R2 and Windows 8/8.1 (Part 1) If you would like to read the other parts in this article series please go to: Introduction Remote Desktop Services began rather modestly back in the late 1990s, with its roots in a variation of the Windows NT operating system that was called Terminal Server Edition. 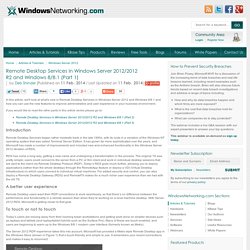 It has grown far more sophisticated over the years, and Microsoft has made a number of improvements and included new and enhanced functionality in the Windows Server 2012 iteration of RDS. RDS has come a long way, getting a new name and undergoing a transformation in the process. Remote Desktop Services licensing rules and recommendations. Microsoft licensing rules are the bane of many IT pros' existence. 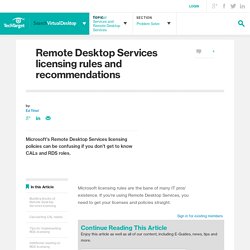 If you're using Remote Desktop Services, you need to get your licenses and policies straight. By submitting your personal information, you agree to receive emails regarding relevant products and special offers from TechTarget and its partners. You also agree that your personal information may be transferred and processed in the United States, and that you have read and agree to the Terms of Use and the Privacy Policy. Deploying RDS 2012 Single Server – Session Based deployment. This guide will show you how to deploy RDS 2012 on a single 2012 Server enabling the use of Remote Desktop Sessions and RemoteApps.