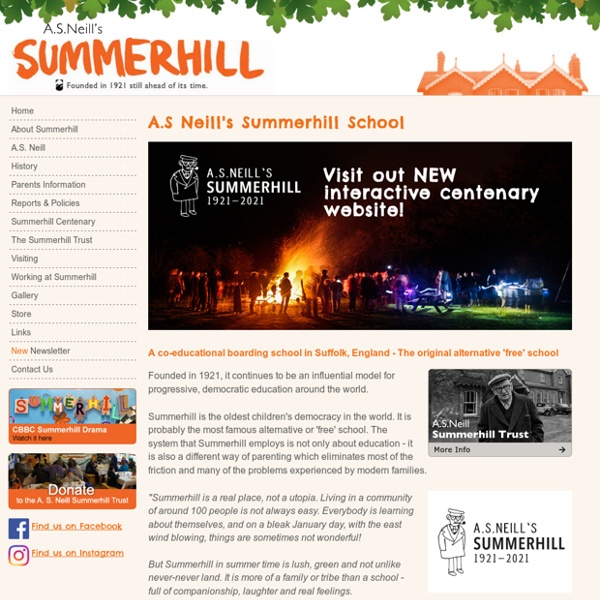 A co-educational boarding school in Suffolk, England - The original alternative 'free' school Founded in 1921, it continues to be an influential model for progressive, democratic education around the world. Summerhill is the oldest children's democracy in the world. It is probably the most famous alternative or 'free' school. The system that Summerhill employs is not only about education - it is also a different way of parenting which eliminates most of the friction and many of the problems experienced by modern families. "Summerhill is a real place, not a utopia.

Éducation : Faut-il fermer Summerhill? Ce matin, Jonas n'est pas allé en cours. Pas envie. Il préfère faire un tour à l'atelier de menuiserie ou bien s'entraîner sur la piste de skateboard. Children's Creativity Museum Animation Studio | Design Studio | Music Studio | Imagination Lab | Innovation Lab | Community Lab At the Children’s Creativity Museum we go beyond the conventional environment of play by inspiring kids to imagine, create and share in our multimedia environment. All of our programs and exhibits are designed to spark the imagination and build creative confidence. With every visit, families create unique media projects and experiences that reflect and celebrate their creativity. All of our core studios and exhibits are facilitated by skilled artists and our C.I.T.Y. Guides who are here to help guide you through the creative process.

Summerhill School Summerhill School is an independent British boarding school that was founded in 1921 by Alexander Sutherland Neill with the belief that the school should be made to fit the child, rather than the other way around. It is run as a democratic community; the running of the school is conducted in the school meetings, which anyone, staff or pupil, may attend, and at which everyone has an equal vote. These meetings serve as both a legislative and judicial body. Members of the community are free to do as they please, so long as their actions do not cause any harm to others, according to Neill's principle "Freedom, not Licence." This extends to the freedom for pupils to choose which lessons, if any, they attend. History[edit]

Freedom versus license In moral and legal philosophy, there exists a distinction between the concepts of freedom and license. The former deals with the rights of the individual; the latter covers the expressed permission (or lack thereof) for more than one individual to engage in an activity. As a result, freedoms usually include rights which are usually recognized (often, not always, in an unconditional manner) by the government (and access to which is theoretically enforced against any and all interferences).

A. S. Neill Early life and career[edit] Alexander Sutherland Neill was born in Forfar, Scotland on 17 October 1883 to George and Mary Neill. He was their fourth son, one of the eight that survived of 13. He raised in an austere, Calvinist house with values of fear, guilt, and adult and divine authority, which he later repudiated. As a child, he was obedient, quiet, and uninterested in school. Summerhill (book) Summerhill: A Radical Approach to Child Rearing is a book about the English boarding school Summerhill School by its headmaster A. S. Neill, known for introducing his ideas to the American public. It was published in 1960 and later revised as Summerhill School: A New View of Childhood in 1993. In a letter to A.

Summerhill at 70 (1992) Summary Intimate and controversial Cutting Edge documentary gives an inside look at Summerhill School. Summerhill School is an independent British boarding school that was founded in 1921 by Alexander Sutherland Neill with the belief that the school should be made to fit the child, rather than the other way around. It is still run as a democratic community; the running of the school is conducted in the school meetings, which anyone, staff or pupil, may attend, and at which everyone has an equal vote. These meetings serve as both a legislative and judicial body.

Neuroscience For Kids The smell of a flower - The memory of a walk in the park - The pain of stepping on a nail. These experiences are made possible by the 3 pounds of tissue in our heads...the BRAIN!! Neuroscience for Kids has been created for all students and teachers who would like to learn about the nervous system. Discover the exciting world of the brain, spinal cord, neurons and the senses. An Ayurvedic Approach To Parenting Balancing By Doshas Is Child’s Play Por Wendy Rosenfeldt Jasper never shows much interest in food unless of course it is sweet. He dislikes the wind and easily gets cold hands and feet.