Easy Buds for Busy People. If you’ve ever thought you don’t have enough time or space to grow, think again. 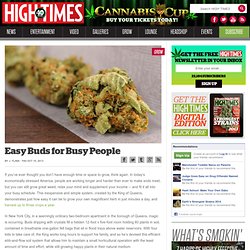 In today’s economically stressed America, people are working longer and harder than ever to make ends meet, but you can still grow great weed, relax your mind and supplement your income -- and fit it all into your busy schedule. This inexpensive and simple system, created by the King of Queens, demonstrates just how easy it can be to grow your own magnificent herb in just minutes a day, and harvest up to three crops a year.

In New York City, in a seemingly ordinary two-bedroom apartment in the borough of Queens, magic is occurring. Buds dripping with crystals fill a hidden 12-foot x five-foot room holding 60 plants in soil, contained in breathable one-gallon felt bags that sit in flood trays above water reservoirs. The system is infinitely expandable, and you can start with just one or two eight-plant trays and add more as desired. EASY CLONE Now the real fun begins.

True Brew: 25 Yummy (and Non-Toxic) Coffee Recipes. I have a confession to make. 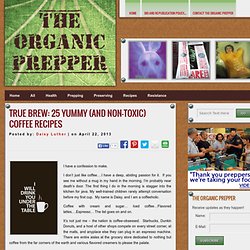 I don’t just like coffee….I have a deep, abiding passion for it. If you see me without a mug in my hand in the morning, I’m probably near death’s door. The first thing I do in the morning is stagger into the kitchen for java. My well-trained children rarely attempt conversation before my first cup. My name is Daisy, and I am a coffeeholic. Coffee with cream and sugar… Iced coffee…Flavored lattes….Espresso… The list goes on and on. It’s not just me – the nation is coffee-obsessed. Like nearly everything else that is sold for profit, however, coffee has become tainted. If your drive to work includes a stop at a fancy coffee shop (or any other kind of coffee shop, for that matter) you aren’t doing your wallet or your health any favors.

(source) An Assault of Toxins and Other Unsavory Items It’s not only the high calories that you have to worry about. Cochineal insects…the source for pink and red “natural color”. Let’s examine the toxins…er…ingredients. How to make BHO to pass testing. Really nice wax/shatter. Never get info from tokecity or thcfarmer or 420. 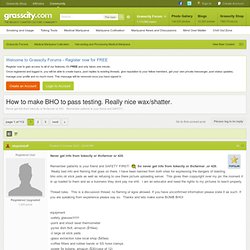 Remember patients is your friend and SAFETY FIRST! So never get info from tokecity or thcfarmer ,or 420. Really bad info and flaming that goes on there. I have been banned from both sites for expressing the dangers of blasting bho onto oil slick pads as well as refusing to use there picture uploading server. This gives then coppyright over my pic the moment it is up loaded to them and as a business they dont pay me shit. Thread rules. Equipment -safety glasses!!!!!!! " Marijuana Strain Data Base Which Strains Are Best For What Illness's & Symptoms " Return Back To Main Medical Reports Page Medical Marijuana Cannabis Seeds, Tips On Picking The Best Strains & Buying Them Differential effects of medical marijuana based on strain and route of administration Check out Our Online Seed Banks Page After Viewing to Buy Your Medical Marijuana Seeds, Afghani #1Lineage: Landrace Breeder: Sensi Seeds Flowering period: 45 days Yield: Average to good Afghani #1 is a classic. 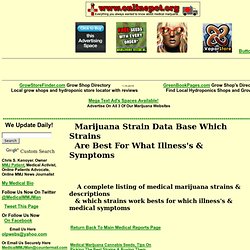 Compact, easy to grow, and potent, it is exactly what you’d expect out of a landrace Afghani. AK-47 Lineage: Colombian, Mexican, Thai and Afghani Breeder: Serious Seeds Flowering period: 53 - 63 days Yield: Good to great Strong smell, compact buds, great yield, and easy to grow. » Recipe: How To Make Bulletproof Coffee In 5 Simple Steps The Bulletproof Executive. 7.2K Flares7.2K Flares× You read about how Bulletproof Coffee came to be after a trip to Tibet. 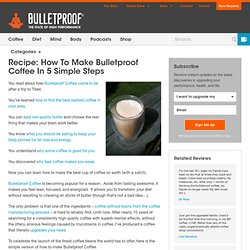 You’ve learned how to find the best (safest) coffee in your area. You can spot low quality butter and choose the real thing that makes your brain work better. 15 Things Worth Knowing About Coffee. Do Magic Mushrooms Explain Santa's "Flying" Reindeer? This Christmas, like many before it and many yet to come, the story of Santa and his flying reindeer will be told, including how the "jolly old elf" flies on his sleigh throughout the entire world in one night, giving gifts to all the good children. 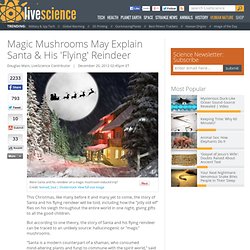 But according to one theory, the story of Santa and his flying reindeer can be traced to an unlikely source: hallucinogenic or "magic" mushrooms. "Santa is a modern counterpart of a shaman, who consumed mind-altering plants and fungi to commune with the spirit world," said John Rush, an anthropologist and instructor at Sierra College in Rocklin, Calif. According to the theory, the legend of Santa derives from shamans in the Siberian and Arctic regions who dropped into locals' teepeelike homes with a bag full of hallucinatory mushrooms as presents in late December, Rush said. The Amanita muscaria mushroom, which is deep red with white flecks.Credit: USGS Presents under the tree "Flying" reindeer Reindeer, which aren't usually known to fly.