Coffee. Top Ten Coffee-Producing Countries (based on the number of 132-pound [60-kilogram] bags produced during the 1997-98 crop year, according to the U.S. 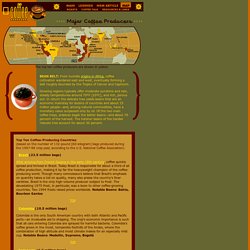 National Coffee Association) Brazil (22.5 million bags) After arriving from French Guiana in the early 18th century, coffee quickly spread and thrived in Brazil. Today Brazil is responsible for about a third of all coffee production, making it by far the heavyweight champion of the coffee-producing world. Though many connoisseurs believe that Brazil’s emphasis on quantity takes a toll on quality, many also praise the country’s finer varieties. Colombia (10.5 million bags) Colombia is the only South American country with both Atlantic and Pacific ports—an invaluable aid to shipping. Indonesia (6.7 million bags) National Coffee Association USA > About Coffee > Coffee Around the World. The ideal conditions for coffee trees to thrive are found around the world in along the Equatorial zone called “The Bean Belt,” located between latitudes 25 degrees North and 30 degrees South. 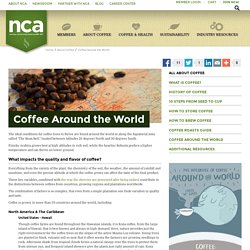 Finicky Arabica grows best at high altitudes in rich soil, while the heartier Robusta prefers a higher temperature and can thrive on lower ground. Everything from the variety of the plant, the chemistry of the soil, the weather, the amount of rainfall and sunshine, and even the precise altitude at which the coffee grows can affect the taste of the final product. These key variables, combined with the way the cherries are processed after being picked, contribute to the distinctions between coffees from countries, growing regions and plantations worldwide. The combination of factors is so complex, that even from a single plantation one finds variation in quality and taste.

Coffee the Environment and Labor. History of the Global Exchange Coffee Campaign Coffee Production and Labor What is the economic situation of small farmers in the coffee industry? 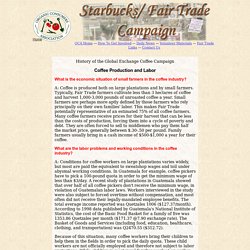 A: Coffee is produced both on large plantations and by small farmers. Typically, Fair Trade farmers cultivate less than 3 hectares of coffee and harvest 1,000-3,000 pounds of unroasted coffee a year. Small farmers are perhaps more aptly defined by those farmers who rely principally on their own families' labor. What are the labor problems and working conditions in the coffee industry? A: Conditions for coffee workers on large plantations varies widely, but most are paid the equivalent to sweatshop wages and toil under abysmal working conditions. Because of this situation, many coffee workers bring their children to help them in the fields in order to pick the daily quota.

Working conditions on these plantations are harsh; as migrant farmworkers, many workers sleep in temporary shelters with rows of bunk beds. Home grown: The revival of Australian coffee farms. Story by Michael Pepperell Ask many people in the industry where coffee was discovered and chances are they’ll tell you an intriguing story about Kaldi and the Ethiopian heritage. 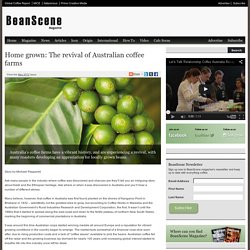 Ask where or when it was discovered in Australia and you’ll hear a number of different stories. Many believe, however, that coffee in Australia was first found planted on the shores of Kangaroo Point in Brisbane in 1832 – admittedly not the greatest area to grow, but according to Coffee Works in Mareeba and the Australian Government’s Rural Industries Research and Development Corporation, the first. It wasn’t until the 1880s that it started to spread along the east coast and down to the fertile plateau of northern New South Wales, marking the beginning of commercial plantations in Australia. It was around this time Australian crops started winning medals all around Europe and a reputation for vibrant growing conditions in the country began to emerge. 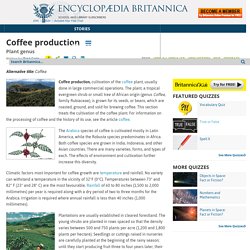 The plant, a tropical evergreen shrub or small tree of African origin (genus Coffea, family Rubiaceae), is grown for its seeds, or beans, which are roasted, ground, and sold for brewing coffee. Environmental Impact of the Coffee Trade - Facts and FiguresSustainable Business Toolkit. It’s the beverage that many of us rely on to galvanize us into action in the mornings and in today’s world, it’s more than popular: it’s ubiquitous. 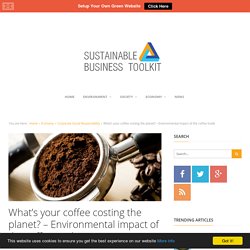 But coffee is so much more than just a drink. As the world’s second most tradable commodity after oil, coffee is now a multibillion dollar global industry and growing. We are all aware of fair trade coffee but have you ever stopped to think what impacts the world’s favourite beverage is having on our planet? The burgeoning coffee culture that has sprung up over the last few decades has led to an overwhelming increase in demand for this liquid gold which has had a knock-on effect on the environment, with monoculture and sun grown coffee now the norm. And given that most coffee growing regions are also home to some of the most delicate ecosystems on earth, the potential for serious damage is great.

Traditional forms of growing coffee These regions are home to many different floras that contribute to high biodiversity levels. Deforestation Waste. Coffee, Conservation, and Commerce in the Western Hemisphere - Chapter 4. 27. 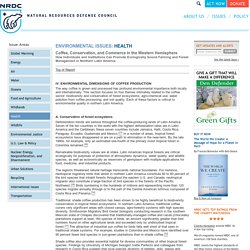