The art of the perfect cup of tea. The Rare Tea Company’s blends (Jeff Gilbert) Tea was considered so important to national morale in the Forties that the government took over supply, which changed the tea landscape dramatically as tea turned from an expensive treat, to more of a cheap thrill. 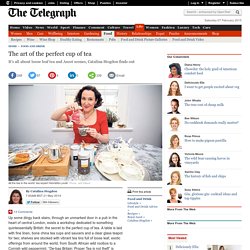 “It was known as a 'floozy,’” says Lovell, “because it gave itself away so quickly. What was on offer was not a good quality.” To illustrate the point she rips open a supermarket brand of tea bag, and the arid contents scatter across the table like sawdust. “Industrially processed tea is like a turkey twizzler, versus a proper loose leaf tea which is the roast chicken. Lovell reveals the perfect way to brew and serve loose leaf tea, dispelling a few myths along the way.

Michelin starred chefs, including Heston Blumenthal, also swear by specific temperatures for particular brews: 80C for green and herbal teas and 85C for black. For a more delicate, complex and sweeter cup of tea infuse quickly, she advises. Serve in china cups. Method. Almond Milk Latte, for the bus stop. This chilled bevy owns the summer of 2014, like Miley Cyrus owns twerking (but more tasteful I promise). 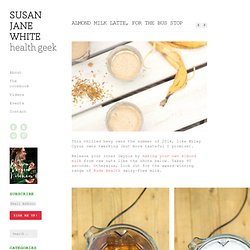 Release your inner Gwynie by making your own almond milk from raw nuts like the shots below. Takes 90 seconds. Otherwise, look out for the award-winning range of Rude Health dairy-free milk. We already know that nuts are incredibly virtuous and tasty, but the almond is the angel of the firmament. These perfumed nuts deserve wings of their own. When soaked, almonds are considered to be alkaline as opposed to acidic. Alkaline foods, such as fresh fruit and vegetables, help our bones access and utilise the calcium from our diet more efficiently. The alkaline-acid theory always sounded a little hocus-pocus, until I researched calcium retention after popping my two brutes. Coffee taste like dirt? That’s because it might be.

By 2080, according to some estimates, nearly 70 percent of the world’s coffee supply could run out, thanks in part to record high temperatures, increasing droughts, and the spread of fungal diseases. 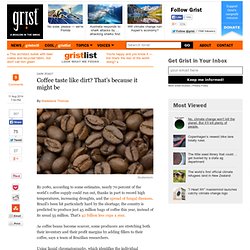 Brazil’s been hit particularly hard by the shortage; the country is predicted to produce just 45 million bags of coffee this year, instead of its usual 55 million. That’s 42 billion less cups a year. As coffee beans become scarcer, some producers are stretching both their inventory and their profit margins by adding fillers to their coffee, says a team of Brazilian researchers. Using liquid chromatography, which identifies the individual chemical components of a mixture, the Brazilian scientists found wheat, soy bean, brown sugar, barley, corn, and rice commonly interspersed with the grounded coffee they tested.

Roasted Coffee Beans. Coffee School - Department of Coffee and Social Affairs. Small Batch Coffee Company. The Lab We are pleased to announce that we are now running training courses for fellow coffee lovers, aspiring or developing baristas and anyone with a thirst for more coffee knowledge. 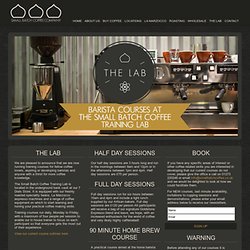 The Small Batch Coffee Training Lab is located in the underground bank vault at our 7 Dials Store. It is equipped with our freshly roasted speciality beans, La Marzocco espresso machines and a range of coffee equipment on which to start learning and honing your practical coffee making skills. Training courses run daily, Monday to Friday, with a maximum of four people per session to enable our in house trainer to focus on each participant so that everyone gets the most out of their experience. View our current course outlines here. Half Day Sessions Our half day sessions are 3 hours long and run in the mornings between 9am and 12pm or in the afternoons between 1pm and 4pm. Full Day Sessions Full day sessions run for six hours between 10am and 4pm and include a light lunch supplied by our Artisan bakers. Book. Catering Coffee Training. Www.roasted.co.uk/roasted_CoffeeInstructions.pdf. Ethical coffee trading : Redroaster famous brighton independent cafe and coffee supplier.

Fairtrade guarantees farmers a price irrespective of the quality of what they produce. 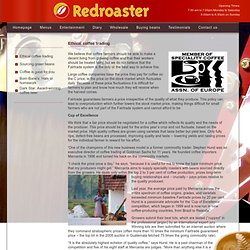 This policy can lead to overproduction which further lowers the stock market price, making things difficult for small farmers who are not part of the Fairtrade system and cannot afford to be. Cup of Excellence We think that a fair price should be negotiated for a coffee which reflects its quality and the needs of the producer. This price should be paid for the entire year’s crop and not fluctuate, based on the market price. High quality coffees are grown using varietals that taste better but yield less. 'One of the champions of this new business model is a former commodity trader. “I check the price once a day,” he says, “because it is useful for me to know the bare minimum price that my producers might get.”