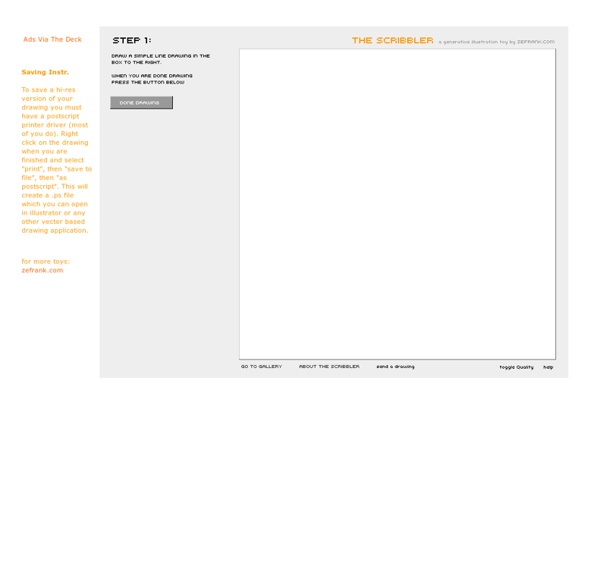 solaas.com.ar Dreamlines is a generative drawing machine that creates a unique, ever-flowing painting after words you choose. Related images are gathered from the Net and used as raw material for the construction of your personal dream. This piece has been devised specifically for Internet. It is a combination of Processing and PHP, with some Flash mixed in for the user interface. The PHP script makes a Google image search with the keywords provided by the user, and collects the resulting images. The Processing applet reads the images one by one and uses them as input to generate an ever-changing drawing.

Palladium Boots Tokyo faces a new reality after the tragedy of 3/11. While persistent challenges still lay ahead, the city’s creative class is hell-bent on making sure that their hometown thrives. Innovative and resilient, they are defining the future of Tokyo on their own terms. We put our boots on and went exploring. Tokyo Rising: Part 2 - Tokyo: Under and Above Ground Tokyo Rising: Part 3 - Art in Flux NGAkids SEA-SAWS SEA-SAWS is fun for kids of all ages. Select photographs of natural and man-made objects, then arrange the pieces to create a seascape or an abstract composition. The BUILD tool helps you construct animated characters and set them in motion. (Shockwave, 7.5 MB)

online paint program Flame Painter is a unique paint program, it belongs to my 'I am an Artist' experimental project. I think with tools which inspires you, everyone can be an artist. You can try it here, change different brush settings and paint your own flame paintings. women fashion shoes, boots, retro indie clothing &vintage clothes Tops Sleeveless Short Sleeve Tees Long Sleeve Web 2.0 Tools World Wide Web sites that use technology beyond the static pages of earlier Web sites A tag cloud (a typical Web 2.0 phenomenon in itself) presenting Web 2.0 themes Web 2.0 (also known as participative (or participatory)[1] web and social web)[2] refers to websites that emphasize user-generated content, ease of use, participatory culture and interoperability (i.e., compatible with other products, systems, and devices) for end users. The term was coined by Darcy DiNucci in 1999[3] and later popularized by Tim O'Reilly and Dale Dougherty at the first O'Reilly Media Web 2.0 Conference in late 2004.[4][5][6] Although the term mimics the numbering of software versions, it does not denote a formal change in the nature of the World Wide Web, but merely describes a general change that occurred during this period as interactive websites proliferated and came to overshadow the older, more static websites of the original Web.[7]

SOLO SOLO Literacy Suite Research & Case Studies Resources Pricing Request A Quote | SOLO Writing Coach SOLO is a literacy suite of the most popular assistive technology accommodations, including a text reader, graphic organizer, talking word processor, and word prediction. The new version (SOLO 6) was completely redesigned to be simple to use, yet powerful for students who struggle to read and write. For these students, SOLO 6 places all of the right tools at their fingertips. The accommodations in SOLO put students in charge of their own learning.

The Girl Who Loves to Levitate (14 photos) - My Modern Metropolis - StumbleUpon Natsumi Hayashi is a sweet-looking Japanese girl who, one day, decided to take self-portraits..of herself levitating. She can be spotted in and around Tokyo, equipped with her SLR and her self-timer. When she feels the moment strike, she presses the shutter button down and then, quite literally, "jumps" into place. What I love most about her shots is that they don't feel forced. Natsumi has a way of making us feel as though she naturally levitates throughout life. Running on Empty Computer science and the technologies it enables now lie at the heart of our economy, our daily lives, and scientific enterprise. As the digital age has transformed the world and workforce, U.S. K–12 education has fallen woefully behind in preparing students with the fundamental computer science knowledge and skills they need for future success.

Poetree: A Funeral Urn That Lets You Plant A Tree From Ashes Images: Margaux Ruyant Though conventional 'deathcare' is hardly green, thanks to the use of embalming chemicals, concrete vaults and non-biodegradable caskets, burials are getting greener each year with various eco-friendly options and smarter approaches. But what about keeping it simple, yet also tying death back into nature's cycle of renewal? That's what French designer Margaux Ruyant does with Poetree, a funeral urn that infuses a poetic spirit into the mourning process. Poetree is a funeral urn that evolves over time, allowing loved ones to plant a tree in the ashes, while also providing a simple but elegant monument. The Poetree is made out of a ceramic ring with the deceased's details, plus a cork container and stopper.

Helicopter Parent A helicopter parent (also called a cosseting parent or simply a cosseter) is a parent who pays extremely close attention to a child's or children's experiences and problems, particularly at educational institutions. Helicopter parents are so named because, like helicopters, they hover overhead. Origins[edit] The term "helicopter parents" is a pejorative expression for parents that has been widely used in the media. The metaphor appeared as early as 1969 in the bestselling book Between Parent & Teenager by Dr.