I carry your heart 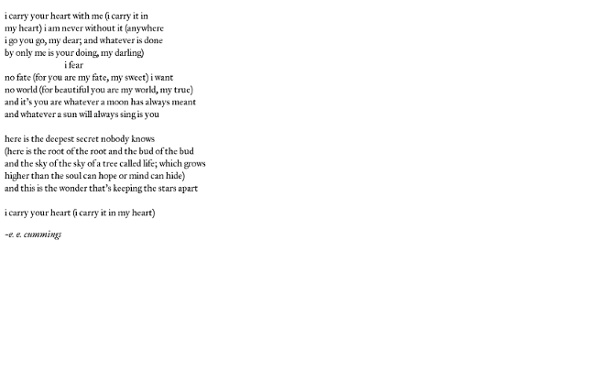 Do not stand at my grave and weep Do Not Stand at My Grave and Weep is a poem written in 1932 by Mary Elizabeth Frye. Although the origin of the poem was disputed until later in her life, Mary Frye's authorship was confirmed in 1998 after research by Abigail Van Buren, a newspaper columnist.[1] Full text[edit] Do not stand at my grave and weep, I am not there; I do not sleep. Stone Telling: The Magazine of Boundary-crossing Poetry by Shira Lipkin the girl's voice the changeling voice I have studied so hard to pass as one of you. I've spent a lifetime on it. I have tells. Though I Am Young and Cannot Tell accent: emphasis given a syllable in ordinary usage, as provided by a pronouncing dictionary. See also stress. accentual-syllabic: the prosodic mode that dominated English-language poetry 1400-1900, and that this tutorial exclusively addresses. Alike distinct from verse that is quantitative (measuring duration, as in classical Greek and Latin), accentual (counting only beats, as in Old English), and syllabic (counting only syllables, as in certain: 20th-cy. experiments), accentual-syllabic verse is based on recurrent units (feet) that combine slacks and stresses in fixed sequence.

Poem Starters and Creative Writing Ideas Enter your e-mail to get the e-book for FREE. We'll also keep you informed about interesting website news. "I have searched the web and used different worksheets, but none have come close to your worksheets and descriptions of (what to do and what not to do).

The Writers Almanac with Garrison Keillor - StumbleUpon Share my father always said, "early to bed and early to rise makes a man healthy, wealthy and wise." it was lights out at 8 p.m. in our house Academy of American Poets Maya Angelou was born Marguerite Johnson in St. Louis, Missouri, on April 4, 1928. She grew up in St. Louis and Stamps, Arkansas. She was an author, poet, historian, songwriter, playwright, dancer, stage and screen producer, director, performer, singer, and civil rights activist.

Slam Poet Blythe Baird Has a Powerful Message About Rape Culture All Women Need to Hear Blythe Baird is 18 years old. This is her Tumblr. In her poem "Pocket-Sized Feminism," Baird critiques rape culture — which, as she conveys, is no different from the culture in which young women grow up. Her message to women? Speak up. I Like Your Flaws I like how you mispronounce words sometimes, how you fumble and stammer and stutter looking for the right ones to say and the right ways to say them. I appreciate that you find language challenging, because it is, because everything manmade is challenging. Including man, including you. When you sleep on your side, I like to map the constellations between your beauty marks freckles pimples, the minuscule mountains that sprinkle your back. Chaos poem. [Journal of the Simplified Spelling Society, 1994/2 pp27-30 later designated J17] Introduced by Chris Upward A number of readers have been urging republication of The Chaos, the well-known versified catalogue of English spelling irregularities. The SSS Newsletter [later designated J3] carried an incomplete, rather rough version in the summer of 1986 (pp.17-21) under the heading 'Author Unknown', with a parallel transcription into an early form of Cut Spelling.

Shake the Dust – This one is for you A poem that will shake you… “Do not let one moment go by that doesn’t remind you that your heart beats 900 times a day, and there are enough gallons of blood to make everyone of you oceans” ~ Anis Mojgani In the back of a large room at Powel’s Bookstore I was half-heartedly listening to a poet I had never heard of. I was checking my email off my phone and wondering what I would scrounge up for dinner. The L-Space Web: Death and What Comes Next The L-Space Web Copyright © Terry Pratchett 2002 When Death met the philosopher, the philosopher said, rather excitedly: "At this point, you realise, I'm both dead and not dead."