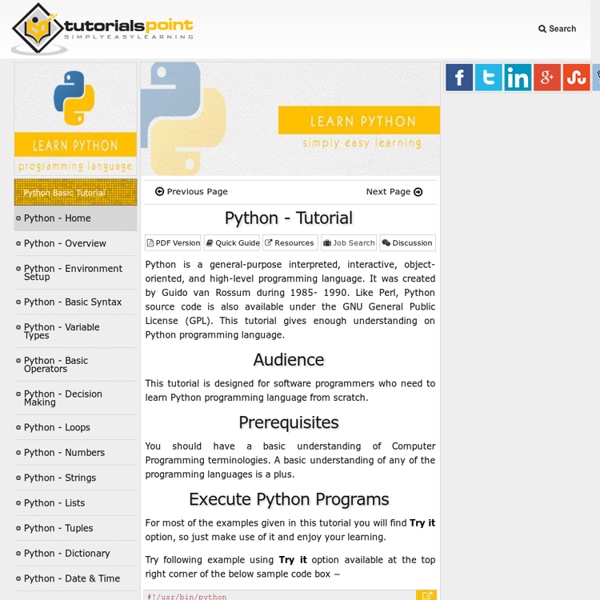 Python is a general-purpose interpreted, interactive, object-oriented, and high-level programming language. It was created by Guido van Rossum during 1985- 1990. Like Perl, Python source code is also available under the GNU General Public License (GPL). This tutorial gives enough understanding on Python programming language. This tutorial is designed for software programmers who need to learn Python programming language from scratch. You should have a basic understanding of Computer Programming terminologies. For most of the examples given in this tutorial you will find Try it option, so just make use of it and enjoy your learning. Try following example using Try it option available at the top right corner of the below sample code box − #!

The Python Standard Library While The Python Language Reference describes the exact syntax and semantics of the Python language, this library reference manual describes the standard library that is distributed with Python. It also describes some of the optional components that are commonly included in Python distributions. Python’s standard library is very extensive, offering a wide range of facilities as indicated by the long table of contents listed below.

Graphics with Matplotlib Matplotlib is a large and sophisticated graphics package for Python written in object oriented style. However, a layer built on top of this basic structure called pyplot accesses the underlying package using function calls. We describe a simple but useful subset of pyplot here. 4.1 Line plots 4.1.1 Simple plots Android Developer SDK Before installing Android Studio or the standalone SDK tools, you must agree to the following terms and conditions. This is the Android Software Development Kit License Agreement 1. Introduction Unix - The vi Editor Tutorial There are many ways to edit files in Unix and for me one of the best ways is using screen-oriented text editor vi. This editor enable you to edit lines in context with other lines in the file. Now a days you would find an improved version of vi editor which is called VIM. Here VIM stands for Vi IMproved.

Cocoa Touch - iOS Technology Overview Built on Objective-C Much of Cocoa Touch is implemented in Objective-C, an object-oriented language that is compiled to run at incredible speed, yet employs a truly dynamic runtime making it uniquely flexible. Because Objective-C is a superset of C, it is easy to mix C and even C++ into your Cocoa Touch applications.

Swift Programming Language Modern Swift is the result of the latest research on programming languages, combined with decades of experience building Apple platforms. Named parameters are expressed in a clean syntax that makes APIs in Swift even easier to read and maintain. Hackerspaces and makerspaces: the zen of innovation Ever watched a kid get so excited about something new? That sparkle in the eye and that ‘let me at it’ urgency that we’d like to capture in every learning interaction? I knew you’d understand. That was my experience recently at the Computers in Libraries Conference, Washington DC, after attending a session by Fiacre O’Duin , Librarian, Cyborg, Cult-Leader :-) Where do I begin? Using Breakpoints in Xcode – Jeffrey Sambells if you’ve used Xcode you’re probably familiar with the basics of breakpoints. Place a little marker in the sidebar and when your code reaches that point, everything pauses at that point so you can take a peek, look around, and see what’s going on with variables and the call stack. Xcode breakpoints offer a number of different features and creating breakpoints can go way beyond clicking the sidebar. Let’s take a look.