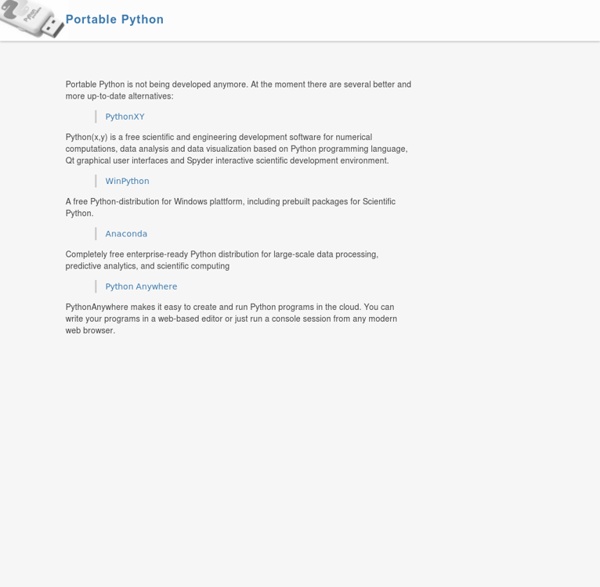 web2py I believe that the ability to easily build high quality web applications is of critical importance for the growth of a free and open society. This prevents the biggest players from monopolizing the flow of information. Hence I started the web2py project in 2007, primarily as a teaching tool with the goal of making web development easier, faster, and more secure. Over time, it has managed to win the affection of thousands of knowledgeable users and hundreds of developers. The Visualization Toolkit There are multiple ways to get the software: The standalone python links point to a package containing a binary executable that you can simply download, unpack and run to create visualizations using VTK's python interface. For Tcl or Java support, or for more full featured Python integration, you will have to compile VTK from source code using CMake and a native build system for your platform.

Developing Android Apps completely in Python The goal of this training is to show you how to start developing full Android applications using only Python. Different technologies will be demonstrated, including PySide-based QML GUIs using the Necessitas Qt port and the Py4A/SL4A-based approach, which can be combined with Android’s WebKit and re-use Python web frameworks. While Android already has a good SDK out of the box, being able to use Python instead of Java is a big advantage for some developers - it allows for quicker turnaround times, and reuse of Python libraries.

Alternative Python Implementations This site hosts the "traditional" implementation of Python (nicknamed CPython). A number of alternative implementations are available as well, namely IronPython (Python running on .NET)Jython (Python running on the Java Virtual Machine)PyPy (A fast python implementation with a JIT compiler)Stackless Python (Branch of CPython supporting microthreads) Other parties have re-packaged CPython. 10 Free Python Programming Books Below is a collection of 10 great Python programming books that are available online in full, completely free of charge: Dive into Python This is a fantastic book that is also available in print . It covers everything, from installing Python and the language's syntax, right up to web services and unit testing.

Sublime Text 2 tips for Python and web developers Update 2014-03: Please see updated blog post for Sublime Text 3. Sublime Text 2 is a very powerful text editor which has gained popularity recently – for good reasons. It is commercial (59 USD). Plenty of power comes from the fact that Sublime has a plug-in framework built in Python. Even though the core app remains closed there exist a vibrant plug-in ecosystem around the editor. Note: You can try Sublime for free.

Passing the torch of NumPy and moving on to Blaze I wrote this letter tonight to the NumPy mailing list --- a list I have been actively participating in for nearly 15 years. Hello all, There is a lot happening in my life right now and I am spread quite thin among the various projects that I take an interest in. In particular, I am thrilled to publicly announce on this list that Continuum Analytics has received DARPA funding (to the tune of at least $3 million) for Blaze, Numba, and Bokeh which we are writing to take NumPy, SciPy, and visualization into the domain of very large data sets. This is part of the XDATA program, and I will be taking an active role in it. Create a package for Android — Kivy 1.9.1-dev documentation You can create a package for android using the python-for-android project. This page explains how to download and use it directly on your own machine (see Packaging with python-for-android), use the prebuilt Kivy Android VM image, or use the Buildozer tool to automate the entire process. You can also see Packaging your application for the Kivy Launcher to run kivy programs without compiling them. For new users, we recommend using Buildozer as the easiest way to make a full APK. You can also run your Kivy app without a compilation step with the Kivy Launcher app. Kivy applications can be released on an Android market such as the Play store, with a few extra steps to create a fully signed APK.

Converting XML to CSV with Python XML. The word “yay” doesn’t necessarily spring to mind. I recently found myself staring at a URL that returned a bunch of XML. It crossed my mind to stop there, but I really wanted this data so I pressed on. pygame.cursors — Pygame v1.9.2 documentation pygame module for cursor resources Pygame offers control over the system hardware cursor. Pygame only supports black and white cursors for the system. Kivy Kivy is the main framework developed by the Kivy organization,[2] alongside Python for Android,[3] Kivy iOS,[4] and several other libraries meant to be used on all platforms. In 2012, Kivy got a $5000 grant from the Python Software Foundation for porting it to Python 3.3.[5] Kivy also supports the Raspberry Pi which was funded through Bountysource.[6] The framework contains all the elements for building an application such as: extensive input support for mouse, keyboard, TUIO, and OS-specific multitouch events,a graphic library using only OpenGL ES 2, and based on Vertex Buffer Object and shaders,a wide range of Widgets that support multitouch,an intermediate language (Kv)[7] used to easily design custom Widgets. Kivy is the evolution of the PyMT project, and is recommended for new projects.[8]