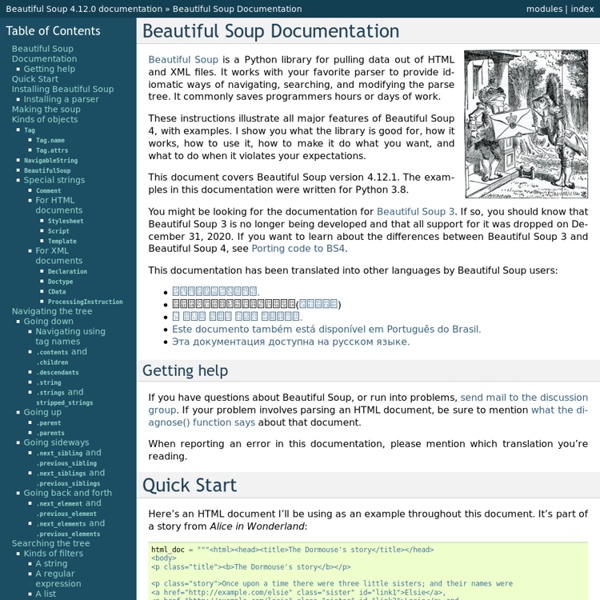 Beautiful Soup is a Python library for pulling data out of HTML and XML files. It works with your favorite parser to provide idiomatic ways of navigating, searching, and modifying the parse tree. It commonly saves programmers hours or days of work. These instructions illustrate all major features of Beautiful Soup 4, with examples. I show you what the library is good for, how it works, how to use it, how to make it do what you want, and what to do when it violates your expectations. The examples in this documentation should work the same way in Python 2.7 and Python 3.2. You might be looking for the documentation for Beautiful Soup 3. This documentation has been translated into other languages by Beautiful Soup users: 这篇文档当然还有中文版.このページは日本語で利用できます(外部リンク)이 문서는 한국어 번역도 가능합니다. Here’s an HTML document I’ll be using as an example throughout this document. Here are some simple ways to navigate that data structure: One common task is extracting all the URLs found within a page’s <a> tags: Tag Name Related:  Python • logank1

Pandas Pivot Table Explained - Practical Business Python Introduction Most people likely have experience with pivot tables in Excel. Pandas provides a similar function called (appropriately enough) pivot_table . While it is exceedingly useful, I frequently find myself struggling to remember how to use the syntax to format the output for my needs. If you are not familiar with the concept, wikipedia explains it in high level terms. As an added bonus, I’ve created a simple cheat sheet that summarizes the pivot_table. The Data One of the challenges with using the panda’s pivot_table is making sure you understand your data and what questions you are trying to answer with the pivot table. In this scenario, I’m going to be tracking a sales pipeline (also called funnel). Typical questions include: How much revenue is in the pipeline? Many companies will have CRM tools or other software that sales uses to track the process. Using a panda’s pivot table can be a good alternative because it is: Read in the data Let’s set up our environment first. Columns vs.

Time Series analysis tsa — statsmodels 0.7.0 documentation statsmodels.tsa contains model classes and functions that are useful for time series analysis. This currently includes univariate autoregressive models (AR), vector autoregressive models (VAR) and univariate autoregressive moving average models (ARMA). It also includes descriptive statistics for time series, for example autocorrelation, partial autocorrelation function and periodogram, as well as the corresponding theoretical properties of ARMA or related processes. It also includes methods to work with autoregressive and moving average lag-polynomials. Additionally, related statistical tests and some useful helper functions are available. Estimation is either done by exact or conditional Maximum Likelihood or conditional least-squares, either using Kalman Filter or direct filters. Currently, functions and classes have to be imported from the corresponding module, but the main classes will be made available in the statsmodels.tsa namespace. Descriptive Statistics and Tests Estimation

Python Lists - Google for Education Python has a great built-in list type named "list". List literals are written within square brackets [ ]. Lists work similarly to strings -- use the len() function and square brackets [ ] to access data, with the first element at index 0. Assignment with an = on lists does not make a copy. The "empty list" is just an empty pair of brackets [ ]. Python's *for* and *in* constructs are extremely useful, and the first use of them we'll see is with lists. If you know what sort of thing is in the list, use a variable name in the loop that captures that information such as "num", or "name", or "url". The *in* construct on its own is an easy way to test if an element appears in a list (or other collection) -- value in collection -- tests if the value is in the collection, returning True/False. The for/in constructs are very commonly used in Python code and work on data types other than list, so you should just memorize their syntax. You can also use for/in to work on a string.

The One-Stop Shop for Big Data If you have decided to learn Python as your programming language. “What are the different Python libraries available to perform data analysis?” This will be the next question in your mind. There are many libraries available to perform data analysis in Python. So let’s get started, Numpy It is the foundation on which all higher level tools for scientific Python are built. N- Dimensional array, a fast and memory efficient multidimensional array providing vectorized arithmetic operations. NumPy does not provide high-level data analysis functionality, having an understanding of NumPy arrays and array-oriented computing will help you use tools like Pandas much more effectively. Tutorials Scipy The SciPy library depends on NumPy, which provides convenient and fast N-dimensional array manipulation. Tutorial I couldn’t find any good tutorial other than Scipy.org. Pandas It contains high-level data structures and tools designed to make data analysis fast and easy. Matplotlib Scikit-learn Conclusion

Pattern Pattern is a web mining module for the Python programming language. It has tools for data mining (Google, Twitter and Wikipedia API, a web crawler, a HTML DOM parser), natural language processing (part-of-speech taggers, n-gram search, sentiment analysis, WordNet), machine learning (vector space model, clustering, SVM), network analysis and <canvas> visualization. The module is free, well-document and bundled with 50+ examples and 350+ unit tests. Download Installation Pattern is written for Python 2.5+ (no support for Python 3 yet). To install Pattern so that the module is available in all Python scripts, from the command line do: > cd pattern-2.6 > python setup.py install If you have pip, you can automatically download and install from the PyPi repository: If none of the above works, you can make Python aware of the module in three ways: Quick overview pattern.web pattern.en The pattern.en module is a natural language processing (NLP) toolkit for English. pattern.search pattern.vector Case studies

Python Boot Camp The BootCamp has wrapped up ... if you took the bootcamp please give us feedback. We took over all the Brower Center! This is the main site for the Python Boot Camp Fall 2013, at the Brower Center (2150 Allston Way) near the UC Berkeley Campus from August 26 (Monday) to August 28 (Wednesday) 2013. If you are interested in a detailed introduction to various Pythonic topics to aid in research, consider the "Python Computing for Data Scientists" seminar course (Thursday 1-4pm; Fall 2013, CC #06080). You must have registered to participate in the Camp and doing so early means we can stay in touch with you with any new developments.

Top 15 Python Libraries for Data Science in 2017 – ActiveWizards: machine learning company – Medium As Python has gained a lot of traction in the recent years in Data Science industry, I wanted to outline some of its most useful libraries for data scientists and engineers, based on recent experience. And, since all of the libraries are open sourced, we have added commits, contributors count and other metrics from Github, which could be served as a proxy metrics for library popularity. Core Libraries. 1. When starting to deal with the scientific task in Python, one inevitably comes for help to Python’s SciPy Stack, which is a collection of software specifically designed for scientific computing in Python (do not confuse with SciPy library, which is part of this stack, and the community around this stack). The most fundamental package, around which the scientific computation stack is built, is NumPy (stands for Numerical Python). 2. SciPy is a library of software for engineering and science. 3. There are two main data structures in the library: “Series” — one-dimensional trends.google.com

's Python Class  |  Python Education  |  Google Developers Welcome to Google's Python Class -- this is a free class for people with a little bit of programming experience who want to learn Python. The class includes written materials, lecture videos, and lots of code exercises to practice Python coding. These materials are used within Google to introduce Python to people who have just a little programming experience. The first exercises work on basic Python concepts like strings and lists, building up to the later exercises which are full programs dealing with text files, processes, and http connections. To get started, the Python sections are linked at the left -- Python Set Up to get Python installed on your machine, Python Introduction for an introduction to the language, and then Python Strings starts the coding material, leading to the first exercise. This material was created by Nick Parlante working in the engEDU group at Google. Tip: Check out the Python Google Code University Forum to ask and answer questions.

Computer Networking : Principles, Protocols and Practice | INL: IP Networking Lab Computer Networking : Principles, Protocols and Practice (aka CNP3) is an ongoing effort to develop an open-source networking textbook that could be used for an in-depth undergraduate or graduate networking courses. The first edition of the textbook used the top-down approach initially proposed by Jim Kurose and Keith Ross for their Computer Networks textbook published by Addison Wesley. CNP3 is distributed under a creative commons license. The second edition of the ebook is now divided in two main parts The first part of the ebook uses a bottom-up approach and focuses on the principles of the computer networks without entering into protocol and practical details. Numerous exercises are also provided as well as interactive quizzes that enable the students to verify their understanding of the different chapters and lab experiments with netkit and other software tools. First edition of the textbook The book contains the following chapters : Bibliography Slides Discussion groups Contributors

7 Major Players In Free Online Education By Jennifer Berry Imagine a world where free, college-level education was available to almost everyone. Believe it or not, you're living in that world right now. Online education has been around for decades, but in the past couple of years, interest has spiked for massive open online courses, otherwise known as MOOCs, according to Brian Whitmer, co-founder of Instructure, an education technology company that created the Canvas Network, a platform for open online courses. "Since 2012, MOOCs have caught the attention of the educational world due to their potential to disrupt how education is delivered and open up access to anyone with an Internet connection," Whitmer explains. According to "Grade Change: Tracking Online Education in the United States," a report by the Babson Survey Research Group released in January 2014, the percent of higher education institutions that currently have a MOOC increased from 2.6 percent to 5.0 percent over the past year. Coursera Standout Free Classes: edX Udemy