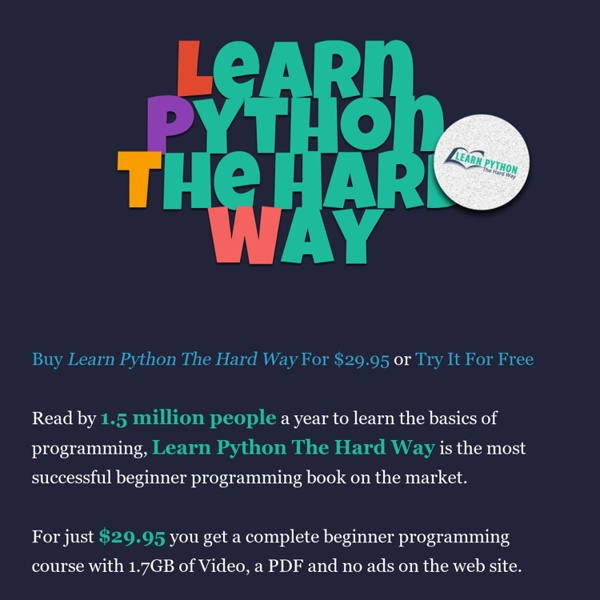 How to Think Like a Computer Scientist — How to Think like a Computer Scientist: Interactive Edition This interactive book is a product of the Runestone Interactive Project at Luther College, led by Brad Miller and David Ranum. There have been many contributors to the project. Our thanks especially to the following: This book is based on the Original work by: Jeffrey Elkner, Allen B. Downey, and Chris MeyersActivecode based on SkulptCodelens based on Online Python TutorMany contributions from the CSLearning4U research group at Georgia Tech.ACM-SIGCSE for the special projects grant that funded our student Isaac Dontje Lindell for the summer of 2013.NSF

Utiliser CMake pour compiler un projet CMake is a tool open source and free to manage the compilation of a project. If we take the classical compilation model, we have: The source files can be files in C, C++, JAVA or any other language. Coding in the Classroom: A Long-Overdue Inclusion One need not look to superstars such as Mark Zuckerberg or Bill Gates to justify reasons for using code and programming logic in the classroom. There's plenty of literature that illustrates its positive learning outcomes. Coding in the classroom is linked to improved problem solving and analytical reasoning, and students who develop a mastery of coding have a "natural ability and drive to construct, hypothesize, explore, experiment, evaluate, and draw conclusions." But there are other compelling reasons for integrating code in the classroom. Reasons to Teach Coding 1.

Building Skills in Python — Building Skills in Python A Programmer’s Introduction to Python Legal Notice This work is licensed under a Creative Commons License. Python Programming Python Programming From Wikibooks, open books for an open world Jump to: navigation, search This book describes Python, an open-source general-purpose interpreted programming language available for a broad range of operating systems. There are currently three major implementations: the standard implementation written in C, Jython written in Java, and IronPython written in C# for the .NET environment. There are two common versions currently in use: 2.x and 3.x. Wiki welcome to our humble (and slightly strange) little part of the World Wide Web. Let me give you a quick introduction about what you've stumbled upon here. pygame (the library) is a Free and Open Source python programming language library for making multimedia applications like games built on top of the excellent SDL library.