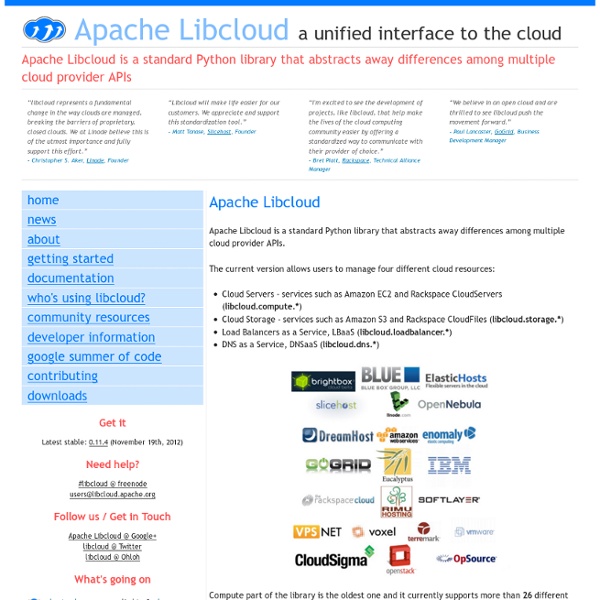 PythonEggs - The PEAK Developers' Center NOTE: If all you want to do is install a project distributed as an .egg file, head straight to the Easy Install page. EasyInstall makes installing Python code as easy as typing easy_install SomeProjectName. You don't need to read this page unless you want to know more about how eggs themselves work. "Eggs are to Pythons as Jars are to Java..." Python eggs are a way of bundling additional information with a Python project, that allows the project's dependencies to be checked and satisfied at runtime, as well as allowing projects to provide plugins for other projects. The easiest way to install and use Python eggs is to use the "Easy Install" Python package manager, which will find, download, build, and install eggs for you; all you do is tell it the name (and optionally, version) of the Python project(s) you want to use. The primary benefits of Python Eggs are: There are also other benefits that may come from having a standardized format, similar to the benefits of Java's "jar" format.

Braintree Python Docs [1] We are unable to underwrite the following business models: icalendar 2.2 The icalendar package is a parser/generator of iCalendar files for use with Python. Changes in version 3.0 API Change Since version 3.0 the icalendar de/serialization API is unified to use only to_ical (for writing an ical string from the internal representation) and from_ical (for parsing an ical string into the internal representation). to_ical is now used instead of the methods ical, string, as_string and instead of string casting via __str__ and str. from_ical is now used instead of from_string. This change is a requirement for future Python 3 compatibility. Timezone support Timezones are now fully supported in icalendar for serialization and deserialization. Instead of our own UTC tzinfo implementation we use pytz UTC tzinfo object now. About this fork which is not a fork anymore After some thoughts we (Plone developers involved with plone.app.event) send a suggestion to icalendar-dev@codespeak.net to take over maintaining of icalendar. License

Presentation: pip and virtualenv | mathematism Screencasts, diagrams, and links from my presentation for July's django-district. I put together a walkthrough of pip and virtualenv for the django-district July meeting. It was a slide-less presentation, focusing mostly on talking points and command-line walkthroughs. virtualenv virtualenv is a tool to create isolated Python environments. The Problem To illustrate the problem let’s pretend you have a Web server with two Web sites on it: mysite.com and anothersite.com. The global site-packages directory has Django 1.0.2, Pinax 0.5 and PIL 1.1.6 among other things. One day, the client for anothersite.com decides they’d like to take advantage of some of the new features in Django 1.1. The Solution anothersite.com and mysite.com need the ability to have their own set of dependencies. virtualenv creates an environment that has its own installation directories and isolates itself from other virtual environments. This allows us to install a different set of dependencies for each of our sites.

virtualenvwrapper 2.8 Enhancements to virtualenv virtualenvwrapper is a set of extensions to Ian Bicking's virtualenv tool. The extensions include wrappers for creating and deleting virtual environments and otherwise managing your development workflow, making it easier to work on more than one project at a time without introducing conflicts in their dependencies. Warning: The 4.x release includes some potentially incompatible changes for extensions from 3.x. Organizes all of your virtual environments in one place.Wrappers for creating, copying and deleting environments, including user-configurable hooks.Use a single command to switch between environments.Tab completion for commands that take a virtual environment as argument.User-configurable hooks for all operations.Plugin system for more creating sharable extensions. Rich Leland has created a short screencast showing off the features of virtualenvwrapper. See the project documentation for installation and setup instructions. Supported Shells Python Versions

Toolkit - ReportLab.com The Open Source PDF library The ReportLab Toolkit is a library for programatically creating documents in PDF format. It's a robust, flexible, time-proven, industry-strength solution. It's free, open-source software written in Python. It lets you quickly and easily create or automate complex or data-driven documents. It's in production use across the world as the trusted and proven foundation of existing enterprise solutions. The library implements three main layers: A graphics canvas API allowing you to 'draw' PDF pages and also create many of the special features of PDF files (outline entries, links and so on) A charts and widgets library for creating reusable data graphics, including many common business and financial charts A flexible page layout engine - PLATYPUS ("Page Layout and TYPography Using Scripts") - which builds documents from components like headlines, paragraphs, fonts, tables, images, and vector graphics. Features:

python-dateutil - Labix Description The dateutil module provides powerful extensions to the standard datetime module, available in Python 2.3+. News 2011-03-24 dateutil 2.0 is out! Ported to Python 3, by Brian Jones. Features Computing of relative deltas (next month, next year, next monday, last week of month, etc); Computing of relative deltas between two given date and/or datetime objects; Computing of dates based on very flexible recurrence rules, using a superset of the iCalendar specification. Quick example Here's a snapshot, just to give an idea about the power of the package. Suppose you want to know how much time is left, in years/months/days/etc, before the next easter happening on a year with a Friday 13th in August, and you want to get today's date out of the "date" unix system command. And here's the output: Today is: 2003-10-11 Year with next Aug 13th on a Friday is: 2004 How far is the Easter of that year: relativedelta(months=+6) And the Easter of that year is: 2004-04-11 Source code and development

Python Imaging Library (PIL) The Python Imaging Library (PIL) adds image processing capabilities to your Python interpreter. This library supports many file formats, and provides powerful image processing and graphics capabilities. Status The current free version is PIL 1.1.7. This release supports Python 1.5.2 and newer, including 2.5 and 2.6. A version for 3.X will be released later. Support Free Support: If you don't have a support contract, please send your question to the Python Image SIG mailing list. You can join the Image SIG via python.org's subscription page, or by sending a mail to image-sig-request@python.org. You can also ask on the Python mailing list, python-list@python.org, or the newsgroup comp.lang.python. Downloads The following downloads are currently available: Additional downloads may be found here. For a full list of changes in this release, see this page. If the Windows installer cannot find a Python interpreter, you may have to register your interpreter.