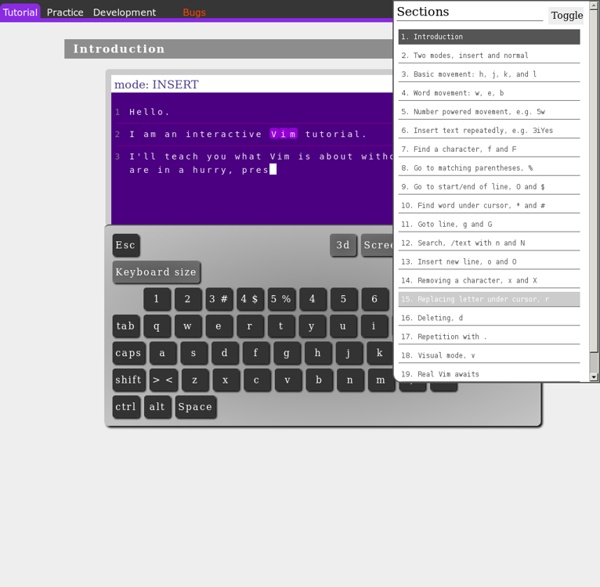 convmv - converts filenames from one encoding to another convmv - converts filenames from one encoding to another convmv [options] FILE(S) ... DIRECTORY(S) -f ENCODING A brief introduction to MIT app inventor - Coding Security A brief introduction to MIT app inventor In this article we will learn what is app inventor?, uses of app inventor, and what are the different types of apps we can build using app inventor. Gut microbes could actually be triggering relapses of multiple sclerosis The role played by the millions of bacteria that live in our intestines is poorly understood, but the more we learn, the more complex it gets. And, according to two new studies out this week, this microbiome could play a more significant part in multiple sclerosis than we thought. Multiple sclerosis, which affects 2.5 million people around the world, is thought to be an autoimmune disease. During a relapse, or attack, immune cells breach the blood-brain barrier and enter the central nervous system, something that is highly restricted in healthy people. These immune cells then attack the protective coating around nerve cells. This causes inflammation in the brain, which in turn causes scarring.

How to Turn Off Your PC Using Your Smartphone Do you want to turn off your PC at your home and save some electricity. Or may be try to shutdown your PC from outside just because it looks cool. We got you covered. The Great Trail in Canada is Officially Open Nearly one year ago, we couldn't contain our excitement about The Great Trail coming to Canada. Now, exactly 11 months later, it's finally and officially open to the public. Snagging the title of the longest hiking trail in the world, The Great Trail begins in St.John, Newfoundland, snakes through 13 provinces and territories (a total of 14,864 miles), loops through the Northwest Territories and Yukon to the Arctic Ocean, and ends in Victoria, British Columbia.

You Can Be Hacked If You Use This Browser Settings - Latest Hacking News If you do a lot of shopping online, taking advantage of your browser’s auto-fill setting may seem like a smart choice. Instead of digging your credit card out of your wallet every time you want to buy something, all the information you need appears automatically. But a new discovery made by a Finnish developer shows why the extra time you save per purchase may not be worth it: Hackers have found a sneaky way to retrieve your stored info. As Thrillist reports, anyone can fall for the scam by submitting a couple basic pieces of information. Web users think they’re just entering their name and email address, but “hidden” text boxes are automatically filled in with more sensitive data like address, phone number, and credit card number.

Satellite Tracking With Friends If you’re in the mood to track satellites, it’s a relatively simple task to look up one of a multitude of websites that can give you a list of satellites visible from your location. However, if you’re interested in using satellites to communicate with far-flung friends, you might be interested in this multi-point satellite tracker. [Stephen Downward VA1QLE] developed the tracker to make it easier to figure out which satellites would be simultaneously visible to people at different locations on the Earth’s surface. This is useful for amateur radio, as signals can be passed through satellites with ham gear onboard (such as NO-44), or users can even chat over defunct military satellites. [Stephen] claims the algorithm is inefficient, but calculations are made in a matter of a few seconds, so we’re not complaining. While it was originally designed for just two stations, it works with a near-infinite number of points.

Why you should learn just a little Awk - A Tutorial by Example In grad school, I once saw a prof I was working with grab a text file and in seconds manipulate it into little pieces so deftly it blew my mind. I immediately decided it was time for me to learn awk, which he had so clearly mastered. To this day, 90% of the programmers I talk to have never used awk. Knowing 10% of awk's already small syntax, which you can pick up in just a few minutes, will dramatically increase your ability to quickly manipulate data in text files. Below I'll teach you the most useful stuff - not the "fundamentals", but the 5 minutes worth of practical stuff that will get you most of what I think is interesting in this little language. Awk is a fun little programming language.

Scientists just added a shocking 20 new branches to the tree of life Scientists have identified the genomes of close to 8,000 microorganisms from samples taken out in the field – and around a third of them are distinct from any life forms known to science, adding a crazy 20 new branches to our tree of microscopic life. Microorganisms fall into two categories, either bacteria or archaea, and make up the vast majority of known species on the planet. But only 1 to 2 percent of them can currently be cultured in a lab, so this study looked at real-world microbes collected from some of the most extreme places on Earth, finding a mother lode of undiscovered species. The team from the University of Queensland in Australia analysed nearly 1,500 environmental samples already logged in a public database, using some serious computing power to make sense of the DNA sequences in each one and build up a picture of thousands of genomes. What's certain is there's a lot more out there to find.

10 Amazing Discoveries That Will Won’t Make You Question Everything Sometimes, just the name of a website is enough to make my heart sink. So, when my partner began reading out the name of a page that a mutual friend had ‘Liked’ on Facebook, I had an awful feeling of déjà vu: Spirit Science. As if to confirm my worst fears, the Welcome page includes this gem of wisdom: coccigrep » To Linux and beyond ! Introduction coccigrep is a semantic grep for the C language based on coccinelle. It can be used to find where a given structure is used in code files. coccigrep depends on the spatch program which comes with coccinelle. Download and source Latest version is 1.13: coccigrep-1.13.tar.gz

Astronomers just found a surprise hidden on the mysterious night side of Venus With its scorching heat and corrosive atmosphere, the toxic hellhole that is Venus isn't the most inviting place in the Solar System, but if you do ever get the opportunity to visit, make sure to return before nightfall. A new analysis of Venus's mysterious night side – the imperceptible dark half that faces away from the Sun – has unexpectedly revealed that the swirling Venusian atmosphere and powerful winds are even more chaotic when masked in shadow. "This is the first time we've been able to characterise how the atmosphere circulates on the night side of Venus on a global scale," says astrophysicist Javier Peralta from the Japan Aerospace Exploration Agency (JAXA). "While the atmospheric circulation on the planet's dayside has been extensively explored, there was still much to discover about the night side." Super-rotation by night (left) and day (right). Credit: ESA, JAXA, J.