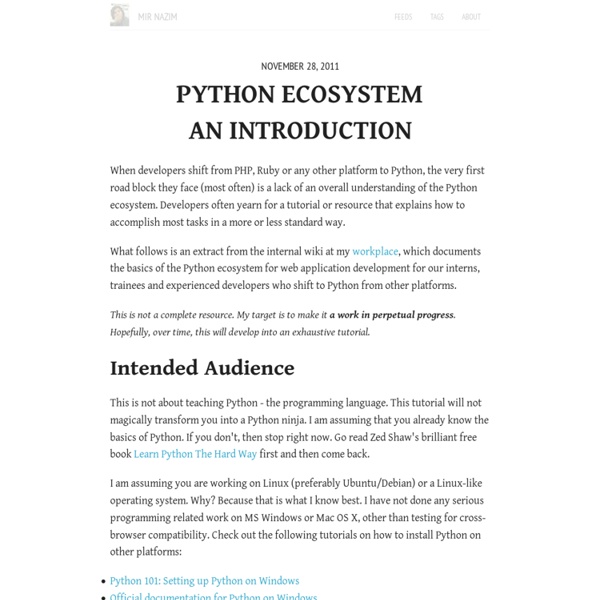 When developers shift from PHP, Ruby or any other platform to Python, the very first road block they face (most often) is a lack of an overall understanding of the Python ecosystem. Developers often yearn for a tutorial or resource that explains how to accomplish most tasks in a more or less standard way. What follows is an extract from the internal wiki at my workplace, which documents the basics of the Python ecosystem for web application development for our interns, trainees and experienced developers who shift to Python from other platforms. This is not a complete resource. My target is to make it a work in perpetual progress. Hopefully, over time, this will develop into an exhaustive tutorial. Intended Audience This is not about teaching Python - the programming language. I am assuming you are working on Linux (preferably Ubuntu/Debian) or a Linux-like operating system. Search the web for the best possible ways of installing Python on your operating system. The version confusion

7 Major Players In Free Online Education By Jennifer Berry Imagine a world where free, college-level education was available to almost everyone. Believe it or not, you're living in that world right now. Online education has been around for decades, but in the past couple of years, interest has spiked for massive open online courses, otherwise known as MOOCs, according to Brian Whitmer, co-founder of Instructure, an education technology company that created the Canvas Network, a platform for open online courses.

60 New Open Source Apps You've (Probably) Never Heard Of As open source software continues to grow in popularity, particularly with enterprises, the number of new open source projects started each year continues to climb. By some estimates the amount of open source code available nearly doubles every year. More importantly, the quality of new projects has also continued to increase. Many newer open source projects are launched by commercial entities that can provide long-term support and are committed to updating their offerings on a regular basis. For this list, we tried to find some of the best FOSS projects that have launched within the last couple of years.

BeginnersGuide - PythonInfo Wiki New to programming? Python is free and easy to learn if you know where to start! This guide will help you to get started quickly. Chinese Translation New to Python? s Python Class - Educational Materials Welcome to Google's Python Class -- this is a free class for people with a little bit of programming experience who want to learn Python. The class includes written materials, lecture videos, and lots of code exercises to practice Python coding. These materials are used within Google to introduce Python to people who have just a little programming experience. The first exercises work on basic Python concepts like strings and lists, building up to the later exercises which are full programs dealing with text files, processes, and http connections. The class is geared for people who have a little bit of programming experience in some language, enough to know what a "variable" or "if statement" is. Beyond that, you do not need to be an expert programmer to use this material.

Syncing Visual Studio Extensions and Settings with Dropbox Idea Sparked by a long wish for keeping my Visual Studio extensions and settings in sync across multiple computers, and a discussion with @kellabyte and @ackenpacken yesterday, I started to research how this could be done. With a quick Google search, I found this blog post by the Visual Studio team, describing where Visual Studio 2010 looks for its extensions. The blog post specified \Common7\IDE\devenv.pkgdef as the file to modify in order to load extensions from additional places than the default ones you get “out of the box”. Further down in the blog post, PkgDefSearchPath was listed, and it seemed like a good to add a folder controlled by Dropbox.

A Tech Blog Covering Startups, Mobile Apps and Gadgets For Tech Enthusiasts - Tech Cocktail Started in Chicago in the summer of 2006 by Frank Gruber and Eric Olson, as a simple mixer event Tech Cocktail thrived at rallying the latest tech innovations in local communities and showcasing them online and off. In 2010, Tech Cocktail turned from a part-time labor of love into a full-fledged tech news blog covering the latest tech startups, mobile apps and gadgets for the “true” tech enthusiast. That is when Frank Gruber took the reins full-time and started assembling to build the media company that Tech Cocktail is today. Stay tuned as we continue to grow the platform and help local tech communities and its business and entrepreneurs.

Blender 3D: Blending Into Python - Wikibooks, collection of open-content textbooks This is the start of a Blender/Python manual. At the moment the most useful areas are the optimization guide and the cookbook. Python is high-level, easy to learn scripting language, that can be applied to various aspects of Blender, and MANY other things. For an introduction, download it. Then google Python Tutorial, and you'll find a wealth of excellent beginner's tutorials. Once you've mastered the basics, you can start learning Blender type stuff.

2011 Rubyist's guide to a Mac OS X development environment — giant robots smashing into other giant robots It's been two and a half years since my last laptop. It's neat to look back and see how much has improved since then for setting up a Ruby development environment. Of particular note, Homebrew, RVM, and Bundler did not exist back then. Here's how I set up an OS X 10.7 (Lion) thoughtbot laptop in 2011. I need GCC to help install everything else so I downloaded GCC for Lion.