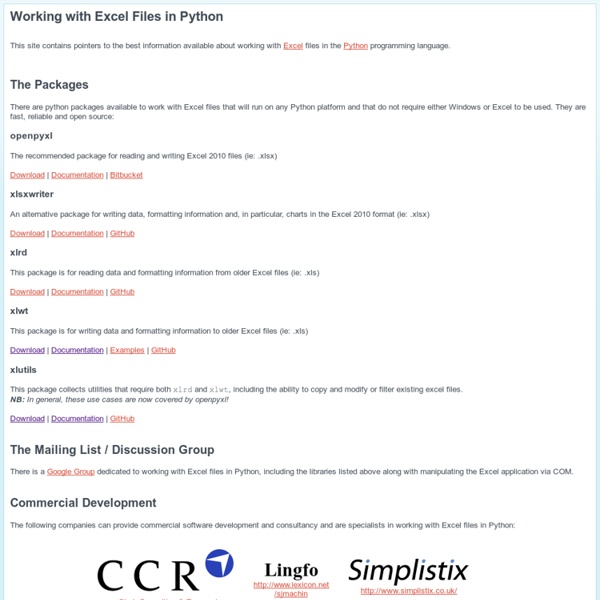 This site contains pointers to the best information available about working with Excel files in the Python programming language. The Packages There are python packages available to work with Excel files that will run on any Python platform and that do not require either Windows or Excel to be used. They are fast, reliable and open source: xlrd This package is for reading data and formatting information from Excel files.

Automate the Boring Stuff with Python Knowing various Python modules for editing spreadsheets, downloading files, and launching programs is useful, but sometimes there just aren’t any modules for the applications you need to work with. The ultimate tools for automating tasks on your computer are programs you write that directly control the keyboard and mouse. These programs can control other applications by sending them virtual keystrokes and mouse clicks, justpython3- as if you were sitting at your computer and interacting with the applications yourself. This technique is known as graphical user interface automation, or GUI automation for short. With GUI automation, your programs can do anything that a human user sitting at the computer can do, except spill coffee on the keyboard. Think of GUI automation as programming a robotic arm.

HOWTO Fetch Internet Resources Using The urllib Package — Python 3.9.1 documentation Author Michael Foord Introduction urllib.request is a Python module for fetching URLs (Uniform Resource Locators). It offers a very simple interface, in the form of the urlopen function. towardsdatascience Pandas DataFrames is an excel like data structure with labeled axes (rows and columns). Here is an example of pandas DataFrame that we will use as an example below: Code to generate DataFrame: Pandas read_csv() function imports a CSV file to DataFrame format. Here are some options:

towardsdatascience After recently using Pandas and Matplotlib to produce the graphs / analysis for this article on China’s property bubble , and creating a random forrest regression model to find undervalued used cars (more on this soon). I decided to put together this practical guide, which should hopefully be enough to get you up and running with your own data exploration using Pandas and MPL!This article is broken up into the following Sections: The Basic Requirements 11. Lists — How to Think Like a Computer Scientist: Learning with Python 3 A list is an ordered collection of values. The values that make up a list are called its elements, or its items. We will use the term element or item to mean the same thing. Lists are similar to strings, which are ordered collections of characters, except that the elements of a list can be of any type. Lists and strings — and other collections that maintain the order of their items — are called sequences. 11.1.