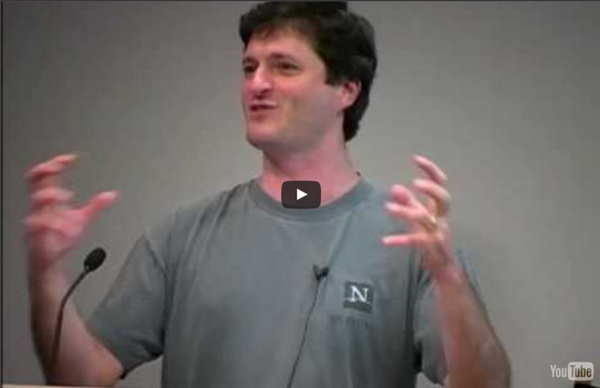 s Python Class - Google's Python Class - Google Code Welcome to Google's Python Class -- this is a free class for people with a little bit of programming experience who want to learn Python. The class includes written materials, lecture videos, and lots of code exercises to practice Python coding. These materials are used within Google to introduce Python to people who have just a little programming experience. The first exercises work on basic Python concepts like strings and lists, building up to the later exercises which are full programs dealing with text files, processes, and http connections. To get started, the Python sections are linked at the left -- Python Set Up to get Python installed on your machine, Python Introduction for an introduction to the language, and then Python Strings starts the coding material, leading to the first exercise. This material was created by Nick Parlante working in the engEDU group at Google. Tip: Check out the Python Google Code University Forum to ask and answer questions.

Python Utilities - Educational Materials In this section, we look at a few of Python's many standard utility modules to solve common problems. File System -- os, os.path, shutil The *os* and *os.path* modules include many functions to interact with the file system. The *shutil* module can copy files. os module docs filenames = os.listdir(dir) -- list of filenames in that directory path (not including . and ..). ## Example pulls filenames from a dir, prints their relative and absolute pathsdef printdir(dir): filenames = os.listdir(dir) for filename in filenames: print filename ## foo.txt print os.path.join(dir, filename) ## dir/foo.txt (relative to current dir) print os.path.abspath(os.path.join(dir, filename)) ## /home/nick/dir/foo.txt Exploring a module works well with the built-in python help() and dir() functions. Running External Processes -- commands The *commands* module is a simple way to run an external command and capture its output. Exceptions The try: section includes the code which might throw an exception. Exercise

s Python Class - Google's Python Class - Google Code Welcome to Google's Python Class -- this is a free class for people with a little bit of programming experience who want to learn Python. The class includes written materials, lecture videos, and lots of code exercises to practice Python coding. These materials are used within Google to introduce Python to people who have just a little programming experience. The first exercises work on basic Python concepts like strings and lists, building up to the later exercises which are full programs dealing with text files, processes, and http connections. The class is geared for people who have a little bit of programming experience in some language, enough to know what a "variable" or "if statement" is. To get started, the Python sections are linked at the left -- Python Set Up to get Python installed on your machine, Python Introduction for an introduction to the language, and then Python Strings starts the coding material, leading to the first exercise.

Learn Python in 10 minutes | Stavros' Stuff NOTE: If you would like some Python development done, my company, Stochastic Technologies, is available for consulting. This tutorial is available as a short ebook. The e-book features extra content from follow-up posts on various Python best practices, all in a convenient, self-contained format. All future updates are free for people who purchase it. Preliminary fluff So, you want to learn the Python programming language but can't find a concise and yet full-featured tutorial. Properties Python is strongly typed (i.e. types are enforced), dynamically, implicitly typed (i.e. you don't have to declare variables), case sensitive (i.e. var and VAR are two different variables) and object-oriented (i.e. everything is an object). Getting help Help in Python is always available right in the interpreter. >>> help(5)Help on int object:(etc etc) >>> dir(5)['__abs__', '__add__', ...] >>> abs. Syntax Python has no mandatory statement termination characters and blocks are specified by indentation. Strings

The Lair of the Python Welcome to the home of the Voidspace Python pages. Not a snake, Python is a dynamic scripting language with a beautifully clean syntax. There's lots of code here to peruse, as well as the Techie Blog which explores life from the point of view of a Pythoneer. Python is a dynamic, object orientated, programming language. Because it's easy to read, it is also easy to learn. In these pages you can find all my Python related stuff. I currently work for a firm called Resolver Systems. You can find more information about IronPython, including a tutorial series on IronPython and Windows Forms (the .NET GUI toolkit for rich client applications) on the IronPython Pages. A programming language is a medium of expression - Paul Graham The programs page contains links to, and descriptions of, the handful of complete programs that I've written. The modules page has links to all the python modules I've written. In the articles section are various articles and tutorials.

Python Dict and File - Educational Materials Dict Hash Table Looking up or setting a value in a dict uses square brackets, e.g. dict['foo'] looks up the value under the key 'foo'. Strings, numbers, and tuples work as keys, and any type can be a value. Other types may or may not work correctly as keys (strings and tuples work cleanly since they are immutable). print dict['a'] ## Simple lookup, returns 'alpha' dict['a'] = 6 ## Put new key/value into dict 'a' in dict ## True ## print dict['z'] ## Throws KeyError if 'z' in dict: print dict['z'] ## Avoid KeyError print dict.get('z') ## None (instead of KeyError) A for loop on a dictionary iterates over its keys by default. ## By default, iterating over a dict iterates over its keys. ## Note that the keys are in a random order. for key in dict: print key ## prints a g o ## Exactly the same as above for key in dict.keys(): print key ## Get the .keys() list: print dict.keys() ## ['a', 'o', 'g'] Dict Formatting Del The "del" operator does deletions. var = 6 del var # var no more! Files

Python Sorting - Educational Materials The easiest way to sort is with the sorted(list) function, which takes a list and returns a new list with those elements in sorted order. The original list is not changed. a = [5, 1, 4, 3] print sorted(a) ## [1, 3, 4, 5] print a ## [5, 1, 4, 3] It's most common to pass a list into the sorted() function, but in fact it can take as input any sort of iterable collection. The older list.sort() method is an alternative detailed below. The sorted() function seems easier to use compared to sort(), so I recommend using sorted(). The sorted() function can be customized though optional arguments. strs = ['aa', 'BB', 'zz', 'CC'] print sorted(strs) ## ['BB', 'CC', 'aa', 'zz'] (case sensitive) print sorted(strs, reverse=True) ## ['zz', 'aa', 'CC', 'BB'] Custom Sorting With key= For more complex custom sorting, sorted() takes an optional "key=" specifying a "key" function that transforms each element before comparison. You can also pass in your own MyFn as the key function, like this: sort() method Tuples

Python Lists - Educational Materials Python has a great built-in list type named "list". List literals are written within square brackets [ ]. Lists work similarly to strings -- use the len() function and square brackets [ ] to access data, with the first element at index 0. (See the official python.org list docs.) colors = ['red', 'blue', 'green'] print colors[0] ## red print colors[2] ## green print len(colors) ## 3 Assignment with an = on lists does not make a copy. b = colors ## Does not copy the list The "empty list" is just an empty pair of brackets [ ]. FOR and IN Python's *for* and *in* constructs are extremely useful, and the first use of them we'll see is with lists. squares = [1, 4, 9, 16] sum = 0 for num in squares: sum += num print sum ## 30 If you know what sort of thing is in the list, use a variable name in the loop that captures that information such as "num", or "name", or "url". list = ['larry', 'curly', 'moe'] if 'curly' in list: print 'yay' You can also use for/in to work on a string. Range While Loop

Python Strings - Educational Materials Python has a built-in string class named "str" with many handy features (there is an older module named "string" which you should not use). String literals can be enclosed by either double or single quotes, although single quotes are more commonly used. Backslash escapes work the usual way within both single and double quoted literals -- e.g. \n \' \". A double quoted string literal can contain single quotes without any fuss (e.g. "I didn't do it") and likewise single quoted string can contain double quotes. Python strings are "immutable" which means they cannot be changed after they are created (Java strings also use this immutable style). Characters in a string can be accessed using the standard [ ] syntax, and like Java and C++, Python uses zero-based indexing, so if s is 'hello' s[1] is 'e'. s = 'hi' print s[1] ## i print len(s) ## 2 print s + ' there' ## hi there Unlike Java, the '+' does not automatically convert numbers or other types to string form. raw = r'this\t\n and that'

Baby Names Python Exercise - Educational Materials The Social Security administration has this neat data by year of what names are most popular for babies born that year in the USA (see social security baby names). The files for this exercise are in the "babynames" directory inside google-python-exercises (download the google-python-exercises.zip if you have not already, see Set Up for details). Add your code in babynames.py. Part A In the babynames.py file, implement the extract_names(filename) function which takes the filename of a baby1990.html file and returns the data from the file as a single list -- the year string at the start of the list followed by the name-rank strings in alphabetical order. ['2006', 'Aaliyah 91', 'Abagail 895', 'Aaron 57', ...]. Rather than treat the boy and girl names separately, we'll just lump them all together. Build the program as a series of small milestones, getting each step to run/print something before trying the next step. Earlier we have had functions just print to standard out. Part B