Windows Phone: how to build a game. 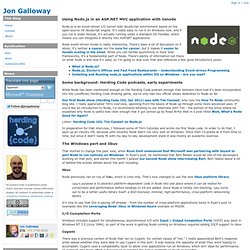 What is Node.js? Node.js. 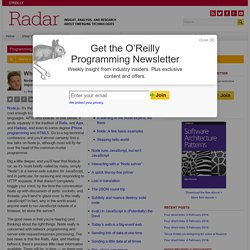 It’s the latest in a long line of “Are you cool enough to use me?” Programming languages, APIs, and toolkits. In that sense, it lands squarely in the tradition of Rails, and Ajax, and Hadoop, and even to some degree iPhone programming and HTML5. Go to a big technical conference, and you’ll almost certainly find a few talks on Node.js, although most will fly far over the head of the common mortal programmer.

Dig a little deeper, and you’ll hear that Node.js (or, as it’s more briefly called by many, simply “Node”) is a server-side solution for JavaScript, and in particular, for receiving and responding to HTTP requests. The good news is that you’re hearing (and thinking) about the right things. A warning to the Node experts out there Node is like most technologies that are new to the masses, but old hat to the experienced few: it’s opaque and weird to most but completely usable for a small group. 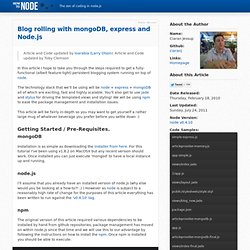 Article and Code updated by Toby Clemson In this article I hope to take you through the steps required to get a fully-functional (albeit feature-light) persistent blogging system running on top of node. The technology stack that we'll be using will be node + express + mongoDB all of which are exciting, fast and highly scalable. You'll also get to use jade and stylus for driving the templated views and styling! This article will be fairly in-depth so you may want to get yourself a rather large mug of whatever beverage you prefer before you settle down :) Getting Started / Pre-Requisites. mongoDB Installation is as simple as downloading the installer from here.

A Beginner’s Tutorial for Node.js : Node.js tutorials at Project 70. I’ve been spending some time learning Node.js. 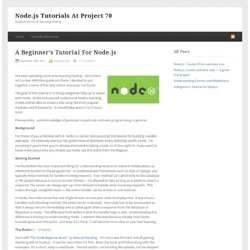 Since there isn’t a clear definitive guide out there, I decided to put together a some of the best online resources I’ve found. The goal of this tutorial is to bring a beginner fully up to speed with Node. The Node Beginner Book » A comprehensive Node.js tutorial.

Mono (software) The logo of Mono is a stylized monkey's face, mono being Spanish for monkey.[4][5] When Microsoft first announced their .NET Framework in June 2000 it was described as "a new platform based on Internet standards",[22] and in December of that year the underlying Common Language Infrastructure was published as an open standard, "ECMA-335",[23] opening up the potential for independent implementations.[24] Miguel de Icaza of Ximian believed that .NET had the potential to increase programmer productivity and began investigating whether a Linux version was feasible.[25] Recognizing that their small team could not expect to build and support a full product, they launched the Mono open source project, on July 19, 2001 at the O'Reilly conference. 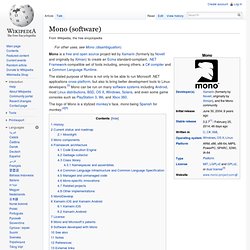 After Novell was acquired by Attachmate in April 2011, Attachmate announced hundreds of layoffs for the Novell workforce,[28] putting in question the future of Mono.[29][30] Mono consists of three groups of components: Simplified Mono architecture. Here's why you should be happy that Microsoft is embracing Node.js. Microsoft-watching superstar Mary Jo Foley alerted us on Tuesday to the release by Microsoft and Joyent of the first stable build of Node.js for Windows servers. 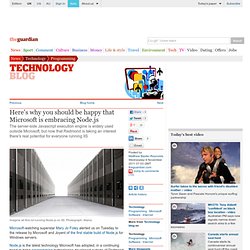 Node.js is the latest technology Microsoft has adopted, in a continuing trend to bring programming technologies developed outside of Redmond to those coding against the Microsoft stack. The good thing about Node.js though is that it's really cool and promises to fit in beautifully with the way the we should be building web applications with .NET. Too cool for school One problem that I've always had as a professional software developer is the pressure I feel from peers to get into new technologies. This is particularly acute because I work primarily on the Microsoft platform, which is usually regarded as the one that's not hip and trendy. Although my feelings on "sticking with what I know" are partially down to an innate curmudgeonliness, there are good reasons to focus on platforms that have broad adoption in industry. PhoneGap. AppMobi.com- Create Mobile and Web Apps with HTML5 and JavaScript.

Will HTML5 replace native apps? It might: here's how to figure out when. The FT's web app – written in HTML5 – is already more popular than its native iOS apps. 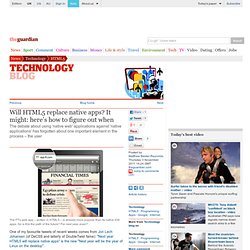 So is this the path of the future? For next year, even? One of my favourite tweets of recent weeks comes from Jon Lech Johansen (of DeCSS and latterly of DoubleTwist fame): "Next year HTML5 will replace native apps" is the new "Next year will be the year of Linux on the desktop". I bet Google's team wishes that native apps were passé, seeing as it had to claw back a malfunctioning iOS app from the market on Wednesday. If if weren't for the fact that its customers insist on having a native app – if only they were happy to use a mobile web browser – then no one at Mountain View would be worried about their jobs.

Matthew Baxter-Reynolds - independent software development consultant, speaker, author, and trainer. What now for cross-platform mobile C#? A side effect of Microsoft having C# accepted an ECMA standard was that it created the environment for the Mono project Miguel de Icaza has had the sort of distinguished career that any professional software engineer would be proud of. 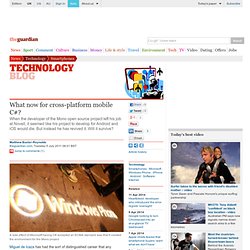 In 2010 he was named one of the five most powerful voices in open source for his work on GNOME and the Mono projects. The fact he is clearly a capable developer and manager makes it all the more surprising when in May he was taken to one side and fired by his employer, Novell. At the time, Miguel was heading up the Mono team at Novell.