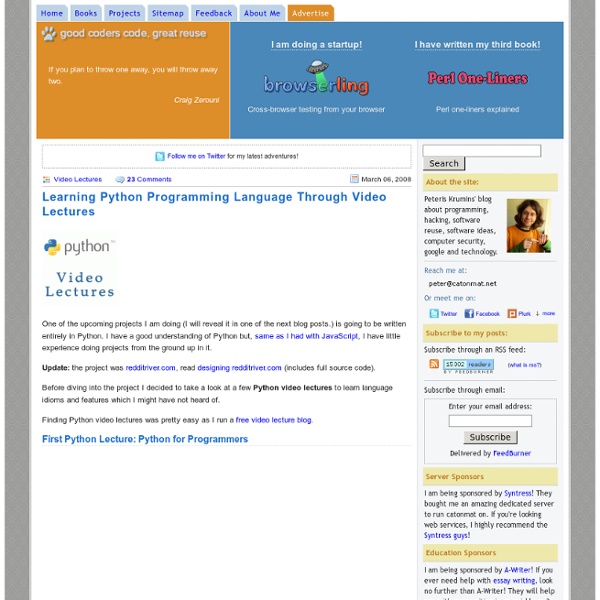 One of the upcoming projects I am doing (I will reveal it in one of the next blog posts.) is going to be written entirely in Python. I have a good understanding of Python but, same as I had with JavaScript, I have little experience doing projects from the ground up in it. Update: the project was redditriver.com, read designing redditriver.com (includes full source code). Before diving into the project I decided to take a look at a few Python video lectures to learn language idioms and features which I might have not heard of. Finding Python video lectures was pretty easy as I run a free video lecture blog. First Python Lecture: Python for Programmers Interesting moments in the lecture: [07:15] There are several Python implementations - CPython, PyPy, IronPython and Jython. Okay, this talk was a very basic talk and it really was an introduction for someone who never worked in Python. Second Python Lecture: Advanced Python or Understanding Python Question and answer session: PS.

An Overview of Cryptography As an aside, the AES selection process managed by NIST was very public. A similar project, the New European Schemes for Signatures, Integrity and Encryption (NESSIE), was designed as an independent project meant to augment the work of NIST by putting out an open call for new cryptographic primitives. NESSIE ran from about 2000-2003. While several new algorithms were found during the NESSIE process, no new stream cipher survived cryptanalysis. As a result, the ECRYPT Stream Cipher Project (eSTREAM) was created, which has approved a number of new stream ciphers for both software and hardware implementation. Similar — but different — is the Japanese Government Cryptography Research and Evaluation Committees (CRYPTREC) efforts to evaluate algorithms submitted for government and industry applications. CAST-128/256: CAST-128, described in Request for Comments (RFC) 2144, is a DES-like substitution-permutation crypto algorithm, employing a 128-bit key operating on a 64-bit block. 3.3.

A Quick, Painless Tutorial on the Python Language Norman Matloff University of California, Davis June 17, 2008 ©2003-2008, N. Matloff Contents What Are Scripting Languages? Languages like C and C++ allow a programmer to write code at a very detailed level which has good execution speed (especially in the case of C). The term scripting language has never been formally defined, but here are the typical characteristics: Used often for system administration, Web programming, text processing, etc. Why Python? The first really popular scripting language was Perl. Advocates of Python, often called pythonistas, say that Python is so clear and so enjoyable to write in that one should use Python for all of one's programming work, not just for scripting work. Background Needed Anyone with even a bit of programming experience should find the material through Section 8 to be quite accessible. The material beginning with Section 10 will feel quite comfortable to anyone with background in an object-oriented programming (OOP) language such as C++ or Java.