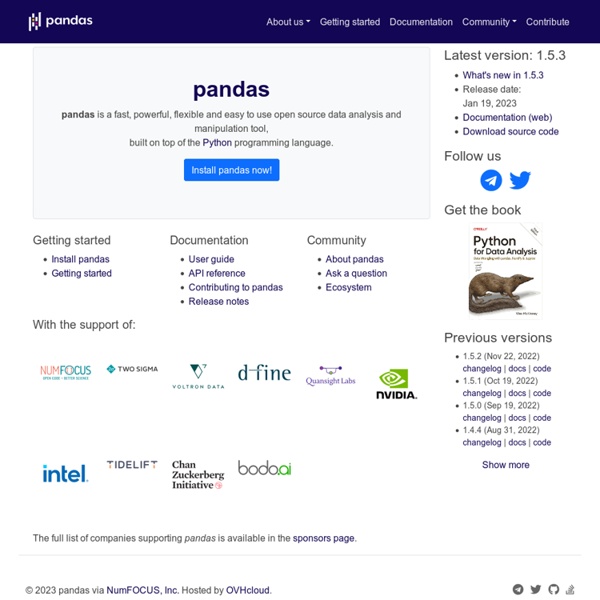 pandas is an open source, BSD-licensed library providing high-performance, easy-to-use data structures and data analysis tools for the Python programming language. 0.13.1 released (February 3, 2014) This is a scheduled bugfix release for 0.13.0, with multiple issues and regressions addressed, and several back-compatible enhancements introduced. See the Release Notes to read all about it. For binaries and source archives of v0.13.1 see the Download page. What problem does pandas solve?

10 Minutes to Pandas — pandas 0.12.0 documentation This is a short introduction to pandas, geared mainly for new users. You can see more complex recipes in the Cookbook Customarily, we import as follows: In [1]: import pandas as pd In [2]: import numpy as np In [3]: import matplotlib.pyplot as plt Object Creation Cage Match Greg Jackson, the single most successful trainer in the multi-billion-dollar sport of professional mixed martial arts fighting, works out of a musty old gym in Albuquerque, New Mexico, not far from the base of the Sandia Mountains. On a recent morning, the 38-year-old Jackson, who has the cauliflowered ears and bulbous nose of a career fighter, watched two of his students square off inside the chain-link walls of a blood-splattered ring called the Octagon. One of them was Jon Jones, the light heavyweight champion of the Ultimate Fighting Championship (UFC), the premier MMA league. In four weeks, Jones would be defending his title against Rashad Evans, an expert fighter and his former training partner.

Welcome - Learn Python - Free Interactive Python Tutorial Welcome to the LearnPython.org interactive Python tutorial. Whether you are an experienced programmer or not, this website is intended for everyone who wishes to learn the Python programming language. You are welcome to join our group on Facebook for questions, discussions and updates. Principal Component Analysis step by step In this article I want to explain how a Principal Component Analysis (PCA) works by implementing it in Python step by step. At the end we will compare the results to the more convenient Python PCA()classes that are available through the popular matplotlib and scipy libraries and discuss how they differ. The main purposes of a principal component analysis are the analysis of data to identify patterns and finding patterns to reduce the dimensions of the dataset with minimal loss of information. Here, our desired outcome of the principal component analysis is to project a feature space (our dataset consisting of n x d-dimensional samples) onto a smaller subspace that represents our data "well".

Alex Gaudio - Monary+Mongo+Pandas = :) A lot of people such as myself waste time getting mongo data into numpy or pandas data structures. You could do it using pymongo. The general process would be to initialize the pymongo driver and make a query, wait for pymongo to convert stuff into lists of son (bson) objects (aka dictionaries), parse the data into arrays, and then copy it into some numpy array. But work’s been done for you already, so why do it again? Thanks to djcbeach, we have a nifty little module that utilizes mongo’s C driver, the bson C library and python’s ctypes module to load data directly into numpy arrays. Its fast and easy!

The Principles of VBD Revisited Want to Dominate your League? Then Dominate your Draft. This article will show you how to do this with the draft system that serious Fantasy Owners across the country use. It's called Value Based Drafting or VBD. Why listen to us about it? rmagic — IPython 2.0.0 documentation To enable the magics below, execute %load_ext rmagic. %R [-i INPUT] [-o OUTPUT] [-w WIDTH] [-h HEIGHT] [-d DATAFRAME] [-u {px,in,cm,mm}] [-r RES] [-p POINTSIZE] [-b BG] [-n] [code [code ...]] Execute code in R, and pull some of the results back into the Python namespace. In line mode, this will evaluate an expression and convert the returned value to a Python object. The return value is determined by rpy2’s behaviour of returning the result of evaluating the final line.

API Reference — pandas 0.17.0 documentation Series Constructor Attributes Axes index: axis labels Welcome to PyBrain’s documentation! — PyBrain v0.3 documentation The documentation is build up in the following parts: first, there is the quickstart tutorial which aims at getting you started with PyBrain as quickly as possible. This is the right place for you if you just want get a feel for the library or if you never used PyBrain before. Although the quickstart uses supervised learning with neural networks as an example, this does not mean that that’s it. PyBrain is not only about supervised learning and neural networks. While the quickstart should be read sequentially, the tutorial chapters can mostly be read independently of each other. In case this does not suffice, we also have an API reference, the Module Index.