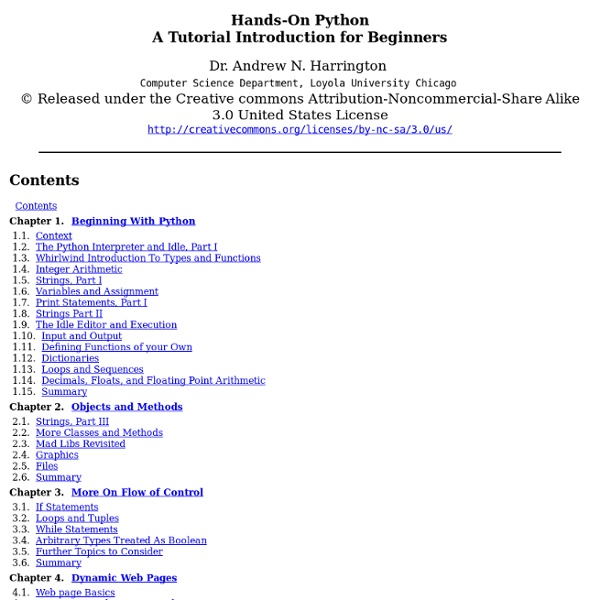 Hands-On Python A Tutorial Introduction for Beginners Contents Chapter 1 Beginning With Python 1.1. You have probably used computers to do all sorts of useful and interesting things. 1.1.1. First let us place Python programming in the context of the computer hardware. z = x+y is an instruction in many high-level languages that means something like: Access the value stored at a location labeled x Calculate the sum of this value and the value stored at a location labeled y Store the result in a location labeled z. No computer understands the high-level instruction directly; it is not in machine language. Obviously high-level languages were a great advance in clarity! If you follow a broad introduction to computing, you will learn more about the layers that connect low-level digital computer circuits to high-level languages. 1.1.2. There are many high-level languages. 1.1.3. If you are not sure whether your computer already has Python, continue to Section 1.2.2 , and give it a try. Windows Linux 1.2.

labs :: Python beginner's mistakes Every Python programmer had to learn the language at one time, and started out as a beginner. Beginners make mistakes. This article highlights a few common mistakes, including some I made myself. Beginner's mistakes are not Python's fault, nor the beginner's. They're merely a result of misunderstanding the language. To put it another way, the mistakes in this article are often cases of "the wrong tool for the job", rather than coding errors or sneaky language traps. Mistake 1: trying to do low-level operations Python is sometimes described as a VHLL, a Very High-Level Language. This doesn't mean that it isn't possible to do these things with Python; but it's probably just not the right language for these jobs. Mistake 2: writing "language X" code in Python This is a mistake that is almost unavoidable. Some notorious symptoms of "language X" code, and the languages that may cause them: The point here is not to slam the language that you're used to (although that is always fun ;-).

For Beginners Welcome! Are you completely new to programming? If not then we presume you will be looking for information about why and how to get started with Python. Fortunately an experienced programmer in any programming language (whatever it may be) can pick up Python very quickly. It's also easy for beginners to use and learn, so jump in! Installing Python is generally easy, and nowadays many Linux and UNIX distributions include a recent Python. If you want to know whether a particular application, or a library with particular functionality, is available in Python there are a number of possible sources of information. If you have a question, it's a good idea to try the FAQ, which answers the most commonly asked questions about Python. If you want to help to develop Python, take a look at the developer area for further information.

labs :: 10 Python pitfalls (or however many I'll find ;-) These are not necessarily warts or flaws; rather, they are (side effects of) language features that often trip up newbies, and sometimes experienced programmers. Incomplete understanding of some core Python behavior may cause people to get bitten by these. This document is meant as some sort of guideline to those who are new to Python. It's better to learn about the pitfalls early, than to encounter them in production code shortly before a deadline. :-} It is *not* meant to criticize the language; as said, most of these pitfalls are not due to language flaws. 1. OK, this is a cheesy one to start with. Solution: Indent consistently. 2. People coming from statically typed languages like Pascal and C often assume that Python variables and assignment work the same as in their language of choice. a = b = 3 a = 4 print a, b # 4, 3 However, then they run into trouble when using mutable objects. a = [1, 2, 3] b = a a.append(4) print b # b is now [1, 2, 3, 4] as well

Python Introduction - Google's Python Class - Google Code Python is a dynamic, interpreted language. Source code does not declare the types of variables or parameters or methods. This makes the code short and flexible, and you lose the compile-time type checking in the source code. Python tracks the types of all values at runtime and flags code that does not make sense as it runs. (todo: link here to the companion video segment for this section) An excellent way to see how Python code works is to run the Python interpreter and type code right into it. Python Program Python source files use the ".py" extension. Here's a very simple Python hello.py program (notice that blocks of code are delimited strictly using indentation rather than curly braces -- more on this later!) #! # import modules used here -- sys is a very standard oneimport sys # Gather our code in a main() functiondef main(): print 'Hello there', sys.argv[1] # Command line args are in sys.argv[1], sys.argv[2] ... # sys.argv[0] is the script name itself and can be ignored Python Module

LIBSVM Tools This page provides some miscellaneous tools based on LIBSVM (and LIBLINEAR). Roughly they include Disclaimer: We do not take any responsibility on damage or other problems caused by using these software and data sets. Please download the zip file. Please download the zip file. Please download the zip file. T. You can use either MATLAB or Python. Python In One Easy Lesson Nick Parlante Nov 2010 This is a one-hour introduction to Python used for Stanford's CS107. This material should work as an introduction for any experienced programmer. Python is a popular open source, cross-platform language in the "dynamic language" niche, like Javascript, Ruby, Lisp, and Perl. Unlike C/C++, Python defers almost everything until runtime. This is how Python works, in contrast to the C/C++ style of knowing the type of every variable and using that for compile time code generation. x = x + x In Python, x could be an int, or a string, or who knows what. Interpreter and Variables You can run the Python interpreter and type code directly in to it -- a good way to try little experiments. Strings Strings are delimited with ' or " or """, and are immutable. >>> a = 'hello' >>> len(a) 5 >>> a[0] 'h' >>> a + '!!!' Lists [ ], For Loop List literals are enclosed in square brackets. Program syntax, if/else, Indentation #! Dict { } Hash Table Sorting Custom sorting Lambda (optional)

Python for Fun This collection is a presentation of several small Python programs. They are aimed at intermediate programmers; people who have studied Python and are fairly comfortable with basic recursion and object oriented techniques. Each program is very short, never more than a couple of pages and accompanied with a write-up. I have found Python to be an excellent language to express algorithms clearly. From many years of programming these are some of my favorite programs. Many thanks to Paul Carduner and Jeff Elkner for their work on this page, especially for Paul's graphic of Psyltherin (apologies to Harry Potter) and to the teams behind reStructured text and Sphinx to which the web pages in this collection have been adapted. Chris Meyers

Bruce Eckel's MindView, Inc: Thinking in Python You can download the current version of Thinking in Python here. This includes the BackTalk comment collection system that I built in Zope. The page describing this project is here. The current version of the book is 0.1. The source code is in the download package. This is not an introductory Python book. However, Learning Python is not exactly a beginning programmer's book, either (although it's possible if you're dedicated). Revision History Revision 0.1.2, December 31 2001.