Espresso Primary - Resource box - Pirates - What is a pirate? - Factfiles - What is a pirate? Hands On History - Pirate Facts. In the latter half of the 16th century Privateers such as Sir Francis Drake and Sir John Hawkins came to the fore to challenge the Spanish claim to the New World and its riches. 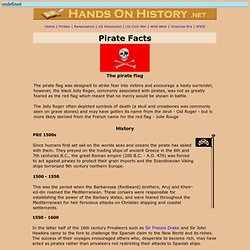 The success of their voyages encouraged others who, desperate to become rich, may have acted as pirates rather than privateers not restricting their attacks to Spanish ships. By the end of the 16th century an uneasy stalemate had been reached after centuries of war between the Muslims and Christians. Stalemate did not mean peace and so seeking to maintain economic power both sides attacked each others ships and settlements, justifying this piracy as acts of war. Buccaneers (1650 - 1700) King James I's withdrawal of all letters of marque in 1603 led to the replacement of privateers by bands of lawless buccaneers such as Sir Henry Morgan and the cruel Francis Lollonais. Pirates (1700 - 1750) The classic era continued into the 18th century when many of the most notorious pirates roamed the seas. 1850 - Present Day. 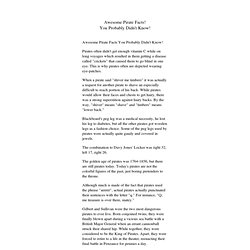 Pirates often didn't get enough vitamin C while on long voyages which resulted in them getting a disease called "crickets" that caused them to go blind in one eye. This is why pirates often are depicted wearing eye-patches. When a pirate said "shiver me timbers" it was actually a request for another pirate to shave an especially difficult to reach portion of his back.

While pirates would allow their faces and chests to get hairy, there was a strong superstition against hairy backs. Litte Known Pirate Facts - The Republic of Pirates. One gang of pirates is responsible for virtually all of our pirate imagery today, and were the primary inspiration for pirates of fiction from Long John Silver to Jack Sparrow. 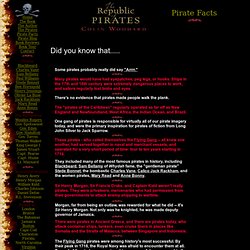 Did you know that..... These pirates - who called themselves the Flying Gang -- all knew one another, had served together in naval and merchant vessels, and operated for a very short period of time: four to ten years starting in 1714. The Flying Gang pirates were among history's most successful. By their peak in 1718, the Royal Navy was afraid to encounter them at all.

Several of the pirates were using ships as powerful as any warship the Navy had posted in the Americas, but the pirates had two or three time the manpower. Sir Henry Morgan, Sir Francis Drake, and Captain Kidd weren't really pirates. Morgan, far from being an outlaw, was rewarded for what he did -- it's Sir Henry Morgan. Some pirates probably really did say "Arrrr. " Many pirates would have had eyepatches, peg legs, or hooks. Scurvy Facts. Scurvy & Scary Facts About Being A Pirate The life of a pirate wasn’t always full of adventure and partying. 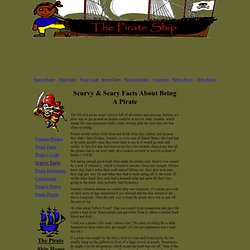 Sailing is a slow way to get around so pirates could be at sea for many months, which meant life was sometimes really, really boring, plus the food they ate was often revolting. Pirates would collect fresh food and drink when they landed, but because they didn’t have fridges, freezers, or even cans of Baked Beans, the food had to be eaten quickly once they went back to sea or it would go stale and moldy. In fact if a ship had been at sea for a few months chances are that all the pirates had to eat were stale, dry crackers covered in weevils (a kind of beetle.) YUCK! Not eating enough good food often made the pirates sick. Another common disease on a pirate ship was Gangrene. Or what about Yellow Fever? I told you a pirate’s life wasn’t always fun!

EWW! So do ye still want to be a pirate, me Hearty? Pirate Facts. True Pirate Facts The Jolly Roger flag, with its black background and white skull and crossbones, was designed to be scary. 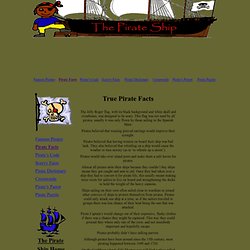 This flag was not used by all pirates, usually it was only flown by those sailing in the Spanish Main. Pirates believed that wearing pierced earrings would improve their eyesight. Pirates believed that having women on board their ship was bad luck. They also believed that whistling on a ship would cause the weather to turn stormy (as in ‘to whistle up a storm’). Pirates would take over island ports and make them a safe haven for pirates.

Almost all pirates stole their ships because they couldn’t buy ships incase they got caught and sent to jail. Ships sailing on their own often sailed close to warships or joined other convoys of ships to protect themselves from pirates. Pirate Captain’s would change out of their expensive, flashy clothes if there was a chance they might be captured. Pirates probably didn’t have talking parrots.