The Scientific Reason Exercise and Meditation Make You Happier. If there was a way to be happier and protect your mind and body against depression naturally, effectively, and quickly, would you do it? 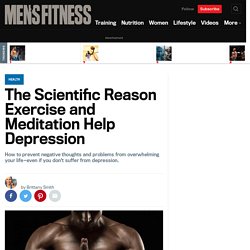 What if we told you that a mind-body combination of meditation and exercise done just twice a week for two months could reduce depressive symptoms by up to 40 percent—even in people who don't suffer from depression? Turns out, that's all it take, according to new findings from Rutgers University. In the study, 55 men and women completed the eight-week program: 22 suffered with depression and 30 were mentally healthy. Over the course of two months, all participants spent 30 minutes on focused-attention meditation (a type of meditation that requires participants to focus on one thing and exclude everything else; in this case, participants were asked to focus on their breath) followed by 30 minutes of aerobic exercise two times a week. Ask Men's Fitness: Is There a Way of Self-Learning Meditation?

20 Weird Side Effects of Working Out >>> Neuroscience and the True Purpose of Yoga. For some time, whenever I went to a yoga class, I’d get that feeling you get when you come in part way through a television series. 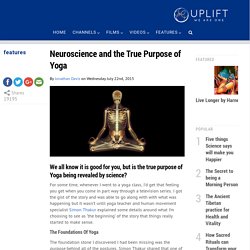 I got the gist of the story and was able to go along with with what was happening but it wasn’t until yoga teacher and human movement specialist Simon Thakur explained some details around what I’m choosing to see as ‘the beginning’ of the story that things really started to make sense. The Foundations Of Yoga The foundation stone I discovered I had been missing was the purpose behind all of the postures. Simon Thakur shared that one of the core functions of yoga is about increasing awareness throughout the body with a particularly important focus around the central axis of the body, between the spine and the organs. ScienceCasts: A Star With Spiral Arms. Hoax Busters - the BIG LIST of Internet Hoaxes. Studies Show Anxious People Have Increased Empathy and Psychic Ability.

The state of having anxiety is often looked at as a disorder in the medical field. 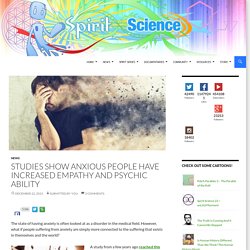 However, what if people suffering from anxiety are simply more connected to the suffering that exists in themselves and the world? A study from a few years ago reached this very conclusion. People who reported suffering from anxiety had an increased ability to feel and interpret emotions of those around them: “Results support the hypothesis that high socially anxious individuals may demonstrate a unique social-cognitive abilities profile with elevated cognitive empathy tendencies and high accuracy in affective mental state attributions.”

Further research on the subject has come up with some fascinating new information regarding the suffering of anxiety. Dr. Yet another study published in the European Journal of Psychology found that participants who reported suffering from anxiety were quicker to detect danger and also quicker to respond to those threats than other participants: DIY PV SOLAR CELLS. SolTech’s Gorgeous Glass Tiles Heat Your Home With Solar Energy. Alternative energy is known to be a lot of things – cutting edge, earth-friendly and forward thinking – but sadly looking pretty isn’t one of them. 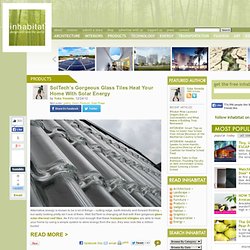 Well SolTech is changing all that with their gorgeous glass solar-thermal roof tiles. As if it’s not cool enough that these transparent shingles are able to heat your home by using a simple system to store energy from the sun, they also look like a million bucks! The urban guide to being self sufficient'ish. How To Make An Amazing DIY Portable Stove. Please Share This Page: Google + stumbleupon tumblr reddit If you are a first-time visitor, please be sure to like us on Facebook and receive our exciting and innovative tutorials and info! 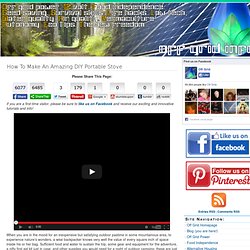 When you are in the mood for an inexpensive but satisfying outdoor pastime in some mountainous area, to experience nature’s wonders, a wise backpacker knows very well the value of every square inch of space inside his or her bag. Truth be told, carrying a backpack isn’t the most fascinating and thrilling experience on any trip, especially on your poor, would-be-strained back muscles, but it is “part of the deal” of camping, backpacking, or travelling outdoors. Avid campers, picnickers, backpackers, and the like appreciate a great deal of portability and tend to rationally avoid pointless bulkiness. A portable stove might be a camper’s or backpacker’s best friend in the wilderness when hunger kicks in and his stomach starts grumbling in protest. Introduction to Videos. Welcome The GeorgiaStandards.Org video library is comprised of best practice videos for teachers. 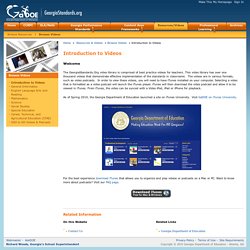 This video library has over one thousand videos that demonstrate effective implementation of the standards in classrooms. The videos are in various formats, such as video podcasts. In order to view these videos, you will need to have iTunes installed on your computer. Selecting a video that is formatted as a video podcast will launch the iTunes player. iTunes will then download the video podcast and allow it to be viewed in iTunes. As of Spring 2010, the Georgia Department of Education launched a site on iTunes University. For the best experience download iTunes that allows you to organize and play videos or podcasts on a Mac or PC. Infinite Chocolate Trick (explained simple)