The Most Amazing Facts on the Internet 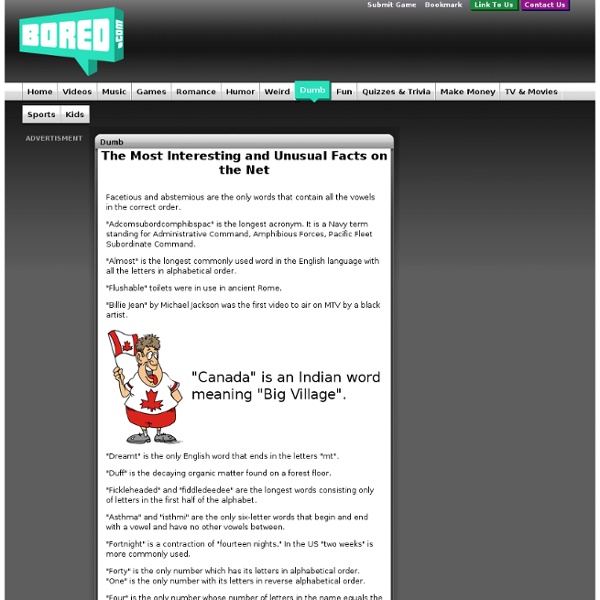 Facetious and abstemious are the only words that contain all the vowels in the correct order. "Adcomsubordcomphibspac" is the longest acronym. It is a Navy term standing for Administrative Command, Amphibious Forces, Pacific Fleet Subordinate Command. "Almost" is the longest commonly used word in the English language with all the letters in alphabetical order. "Flushable" toilets were in use in ancient Rome. "Billie Jean" by Michael Jackson was the first video to air on MTV by a black artist. "Dreamt" is the only English word that ends in the letters "mt". "Duff" is the decaying organic matter found on a forest floor. "Fickleheaded" and "fiddledeedee" are the longest words consisting only of letters in the first half of the alphabet. "Asthma" and "isthmi" are the only six-letter words that begin and end with a vowel and have no other vowels between. "Fortnight" is a contraction of "fourteen nights." "Forty" is the only number which has its letters in alphabetical order. A cucumber is 96% water.

Tony Orrico Mesmerizing performance drawings by artist and dancer Tony Orrico. He is a human spirograph, performing works for up to 4 hours continuously! Watch the videos below! Ryan Bassil: The Top 5 Underground UK Artists Since the introduction of the internet, the UK underground music scene has been teeming with more new artists than you can shake a stick at. Back in 2006, anyone could upload a couple of tracks to MySpace, and now -- fast forwarding to 2011 -- everyone, from your neighbour to the guy serving your burgers at McDonalds can upload a song to soundcloud, tweet about it, and get it out into the fast paced world of the www dot in seconds. It's a beautiful world, because the ease of the internet has allowed many genres to flourish. There are a lot of voices out there -- here's a few you should be listening out for: Zoo Kid East London troubadour Archy Marshall aka Zoo Kid is a member of the Brit School -- you know -- the talent-studded school in the UK which has spawned the likes of Adele and The Kooks. Despite still being at school, Archys working on his debut album which will be released via House Anxiety Records. Sami Switch Context MC Joy Orbison Nope, he's not Roy Orbisons illegitimate son.