The Facts, Pronouncements, and the Donald 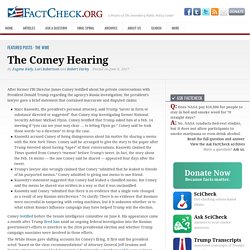 Comey testified that Trump asked him at a Feb. 14 meeting if “you can see your way clear … to letting Flynn go.” Comey said he took those words “as a direction” to drop the case.Kasowitz accused Comey of being disingenuous about his motive for sharing a memo with the New York Times. Comey said he arranged to give the story to the paper after Trump tweeted about having “tapes” of their conversations. Open Thread - Words Of Wisdom? 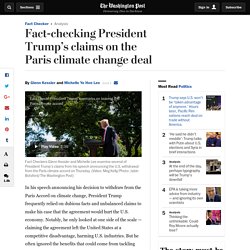 Trump Posts Fox News Story Using Anonymous Source To ‘Vindicate’ Kushner, Entire World Calls BS. Donald Trump has been on Twitter for nearly 48 straight hours, clearly making up for lost time during his international trip when his advisers took away his phone. 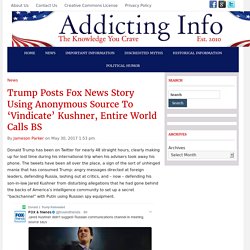 The tweets have been all over the place, a sign of the sort of unhinged mania that has consumed Trump: angry messages directed at foreign leaders, defending Russia, lashing out at critics, and – now – defending his son-in-law Jared Kushner from disturbing allegations that he had gone behind the backs of America’s intelligence community to set up a secret “backchannel” with Putin using Russian spy equipment. Numerous media organizations including the Washington Post and the New York Times have confirmed with reliable, high-ranking sources that Kushner did this.

The evidence appears to be pretty damning. In fact, the White House seemed unable to defend Kushner. For the first few days after news broke, the only response from Trump supporters was that Kushner should have been allowed to do this. Sounds legit. TRUMP'd: HYPOCRISY Never Looked This Bad! Trump’s epiphany: Peace between Israel and Palestine is ‘not easy’ By Callum Borchers By Callum Borchers The Fix Analysis Analysis Interpretation of the news based on evidence, including data, as well as anticipating how events might unfold based on past events May 22 at 3:05 PM. 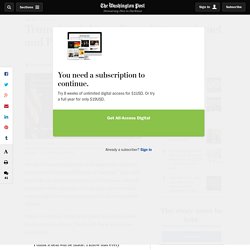 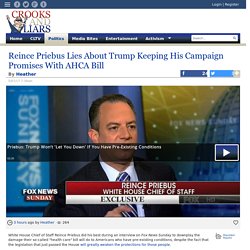 </a> White House Chief of Staff Reince Priebus did his best during an interview on Fox News Sunday to downplay the damage their so-called "health care" bill will do to Americans who have pre-existing conditions, despite the fact that the legislation that just passed the House will greatly weaken the protections for those people. ‘Sure they have your number?’: Anderson Cooper mocks Sean Spicer for ‘no comment’ on border wall lie. Trump snaps and calls CBS show ‘Deface the Nation’ after host points out policy reversals in first 100 days.

100 Days of Whoppers - FactCheck.org. Summary Donald Trump — whom we crowned the “King of Whoppers” when he was a long-shot candidate in 2015 — has held true to form during his first 100 days as president of the United States. 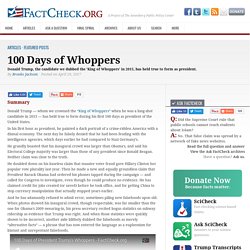 In his first hour as president, he painted a dark portrait of a crime-ridden America with a dismal economy. The next day he falsely denied that he had been feuding with the intelligence agencies, which days earlier he had compared to Nazi Germany’s. He grandly boasted that his inaugural crowd was larger than Obama’s, and said his Electoral College majority was larger than those of any president since Ronald Reagan. Neither claim was close to the truth. He doubled down on his baseless claim that massive voter fraud gave Hillary Clinton her popular vote plurality last year. And he has adamantly refused to admit error, sometimes piling new falsehoods upon old. Analysis.

AP interview provides your handy reminder that Donald Trump is nucking futs. TRUMP: A little before I took office there was a terrible article about the F-35 fighter jet. 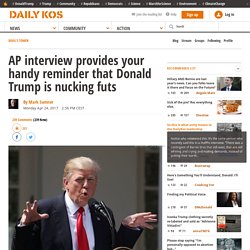 It was hundreds of billions of dollars over budget. It was seven years behind schedule. It was a disaster. ‘You just said you did’: AP busts Trump for lying about watching CNN two minutes after he admitted it. U.S. 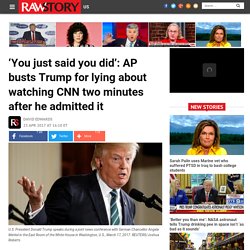 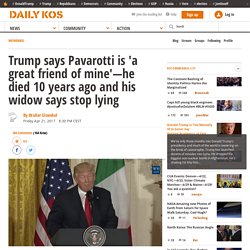 It’s hard to screw up a press conference introduction but the wannabe tiny-handed model did just that. Through the ages your country has been a beacon of artistic and scientific achievement. That continues today. From Venice to Florence, from Verdi to Pavarotti—friend of mine. CIA’s White House liaison abruptly fired — after he clashed with Flynn loyalist in cahoots with Nunes. Rep. 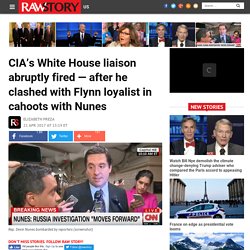 Devin Nunes bombarded by reporters (screenshot) The CIA’s liaison to the White House was abruptly fired from his role after clashing with National Security Council member Ezra Cohen-Watnick, one of three sources who provided documents to House Intelligence Committee Chairman Devin Nunes (R-CA). President Donald Trump would use Nunes’ information in an attempt to justify his unsubstantiated claim that former President Barack Obama wiretapped Trump Tower during the 2016 presidential campaign. The Guardian reports the Marine officer, who was responsible for “bringing relevant White House officials … into the loop about cover operations,” was told in mid-March he did not need to come to work the next day.

Former colleagues of the Marine described the move as unprofessional. “It was the most disrespectful thing they could have done,” a White House official told the Guardian. As RawStory reported last month, H.R. “[Officials at the CIA] hate him. Trump just admitted his presidency isn’t going well — tacitly. By Aaron Blake By Aaron Blake The Fix Analysis Analysis is interpretation of the news based on evidence, including data, as well as anticipating how events might unfold based on past events. President Trump, here’s why 100 days may not be such a ‘ridiculous standard’ President Trump repeatedly emphasized the importance of the first 100 days of his potential presidency while on the campaign trail.

All of these clips were filmed between Oct. 24 and Nov. 6, 2016. (Gillian Brockell/The Washington Post) After Trump Was Elected, Librarians Had To Rethink Their System For Fact-Checking. Trump breaks silence on North Korea, defends reversal on China. President Trump boards Air Force One on Thursday at Andrews Air Force Base on the way to his Mar-a-Lago resort in Florida. (Alex Brandon/AP) President Trump on Sunday defended his recent about-face on calling China a currency manipulator, saying he welcomes the country’s help in dealing with North Korea. The comment on Twitter was the first from Trump since North Korea’s latest missile launch. “Why would I call China a currency manipulator when they are working with us on the North Korean problem?” Trump wrote on Twitter.

“We will see what happens!” Trump, spending a long weekend at his Mar-a-Lago estate in Florida, had remained silent and largely stayed out of sight Saturday while North Korea staged a huge parade in Pyongyang to showcase its military prowess and later launched a ballistic missile that exploded within seconds. The president spend both Friday and Saturday mornings golfing at his private club in Palm Beach, Fla., and held no public events. politics. President Trump’s bushel of false claims in his Fox Business interview. (Evan Vucci/AP) In an interview with Maria Bartiromo of Fox Business Network, President Trump made a number of factually inaccurate and dubious claims. Here’s a roundup of the lowlights.

“It’s been very much misreported that we failed with health care. This interview alone is grounds for impeachment. TRUMP: Yes, I am waiting right now for so many people. BARTIROMO: You're under staffed. TRUMP: Hundreds and hundreds of people. And then they'll say, why isn't Trump doing this faster? You can't do it faster, because they're obstructing. Trump Admits Health Care Cuts Needed For Tax Cuts To Billionaires. Donald Trump: Liar in Chief - Rolling Stone. "What should a United States senator, or any citizen, do if the president is a liar? " Sen. Bernie Sanders mused in March. The media, elected officials, even Trump's spokespeople have all struggled to reckon with a chronically dissembling commander in chief. Trump Again Downplays Steve Bannon's White House Role.

WATCH: Boos erupt after Trump tells room full of construction workers that he won most of their votes. Trump Claims He Can 'Totally' Solve North Korea Without Any Help From China. <a class="icopyright-article-tools-noscript" href=" target="_blank" title="Main menu of all reuse options"><img height="25" width="27" border="0" align="bottom" alt="[Reuse options]" src=" Click here for reuse options! Here's Trump telling everyone 'we don't make mistakes'—then making an embarrassing mistake. Unpopular President Donald Trump did a nice photo op with leaders from the Fraternal Order of Police a short while ago. As a result, MSNBC was there. Life-cycle-donald-trump-lie?akid=15357.2617. Photo Credit: duncan c / Flickr On March 4, President Donald Trump declared himself the victim of a scandal on the level of the the Watergate crimes that brought down President Richard Nixon.

In an early-morning tweetstorm apparently triggered by reading a Breitbart article, the president claimed that President Barack Obama “had my ‘wires tapped’ in Trump Tower” in an October effort to influence the election. Over the past three weeks, Obama’s spokesperson, his director of national intelligence, the directors of the National Security Agency and FBI, Trump’s Justice Department, and the bipartisan leaders of the Houseand Senate intelligence committees have all said that this isn’t true, and the claims have been widely ridiculed by the press.

It was a startling and serious allegation about a former president, made in a series of four tweets on March 4. Yet, Trump provided no support for it, and the White House remained silent for a day. Log In - New York Times. Log In. Transcript And Analysis: President Trump's Speech To Congress. Trump’s Speech Was Quiet — And Quietly Radical. Trump-O-Meter: Tracking Trump's Campaign Promises. Fact-checking Donald Trump's address to Congress. ‘They lost Ryan’: Trump blames his own generals for Yemen raid that killed Navy SEAL. Trump Blames Obama For His Political Protester Problem. Chat: The Biggest Surprises Of The Trump Presidency So Far.

Trump’s Immigration Ban Excludes Countries With Business Ties. Trump on Torture, Again. This Week In Trump's 'Alternative Facts' President Trump's Interview with David Muir on ABC Was Horrifying. TrumpBeat: There Is No Pivot. Trump Claims Waterboarding Doesn’t Come Close To The Excruciating Torment He Experiences At Every Moment. Sean Spicer Turns First Press Conference Into Ad for Trump Hotel: 'I Encourage You to Go There' "...If the press were honest - which it's not - I would absolutely not use Twitter. I wouldn't have to." -President-elect Trump. Help Us Map TrumpWorld - BuzzFeed News. 6 of Donald Trump's Most Appalling Moments This Week. Fact-checking what Donald Trump’s lawyer said about the president-elect’s finances. Here are 14 fake news stories created or publicized by Donald Trump.