How to Do What You Love 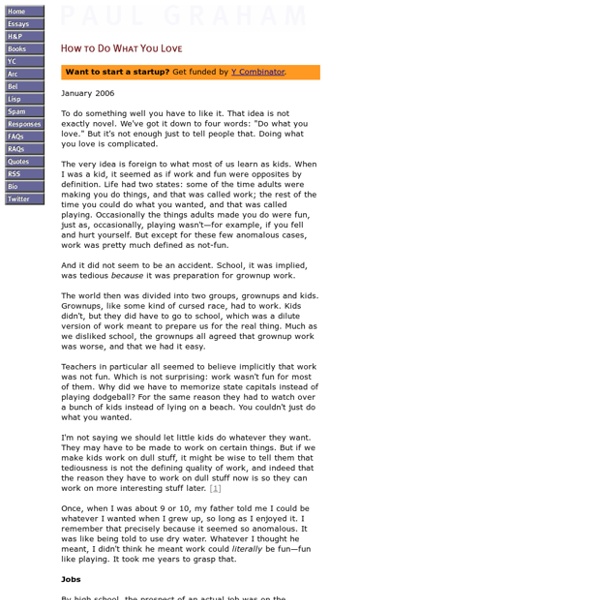 January 2006 To do something well you have to like it. That idea is not exactly novel. We've got it down to four words: "Do what you love." But it's not enough just to tell people that. Doing what you love is complicated. The very idea is foreign to what most of us learn as kids. And it did not seem to be an accident. The world then was divided into two groups, grownups and kids. Teachers in particular all seemed to believe implicitly that work was not fun. I'm not saying we should let little kids do whatever they want. Once, when I was about 9 or 10, my father told me I could be whatever I wanted when I grew up, so long as I enjoyed it. Jobs By high school, the prospect of an actual job was on the horizon. The main reason they all acted as if they enjoyed their work was presumably the upper-middle class convention that you're supposed to. Why is it conventional to pretend to like what you do? What a recipe for alienation. The most dangerous liars can be the kids' own parents. Bounds Notes

Maker's Schedule, Manager's Schedule July 2009 One reason programmers dislike meetings so much is that they're on a different type of schedule from other people. Meetings cost them more. On Writing in the Morning In the morning, I don’t talk to anyone, nor do I think about certain things. I try to stay within certain confines. I imagine this as a narrow, shadowy corridor with dim bare walls. I’m moving down this corridor, getting to the place where I can write. I brush my teeth, get dressed, make the bed. The Acute Heptagram of Impact Not as catchy a title as Maslow's Hierarchy of Needs, but I hope you'll walk through this with me: I can outline a strategy for you, but if you don't have the tactics in place or you're not skilled enough to execute, it won't matter if the strategy is a good one. Your project's success is going to be influenced in large measure by the reputation of the people who join in and the organization that brings it forward. That's nothing you can completely change in a day, but it's something that will change (like it or not) every day. None of this matters if you and your team don't persist, and your persistence will largely be driven by the desire you have to succeed, which of course is relentlessly undermined by the fear we all wrestle with every day. These seven elements: Strategy, Tactics, Execution, Reputation, Persistence, Desire and Fear, make up the seven points of the acute heptagram of impact.

The 10 Top Productivity Blogs A blog worth reading is one that offers consistently original content and is more concerned with having great posts than fulfilling a certain quota of posts. The following ten blogs offer something unique and can help improve your life. 1. 25 Best Headphone Brands Of 2012 Special UnderCurrent Feature 2012 was undoubtedly the Year of the High Concept Headphones. To celebrate the incredible surfeit of styles, endorsements and colours available to audiophiles, fashionophiles and wellheeledophiles, UnderCurrent today presents a special look at its 25 favourite headphone brands. All the below models were relased in 2012 – UnderCurrent has chosen the ideal audio to listen to while considering each individual pair. FREE Interactive Learning OpenCourseware from MIT, UC Berkeley, Harvard, Yale, Stanford, U Houston, USC, UCLA, Khan Academy, NPTEL General description: Language may refer either to the specifically human capacity for acquiring and using complex systems of communication, or to a specific instance of such a system of complex communication. The scientific study of language in any of its senses is called linguistics. The approximately 3,000–6,000 languages that are spoken by humans today are the most salient examples, but natural languages can also be based on visual rather than auditory stimuli, for example in sign languages and written language. Codes and other kinds of artificially constructed communication systems such as those used for computer programming can also be called languages. A language in this sense is a system of signs for encoding and decoding information.

Late-BREAKING News Bad news! I broke my left elbow this weekend. Examine this PRIMARY SOURCE DOCUMENT [an excerpt from an e-mail I wrote to Wes Man] to learn more: "i broke my arm on saturday night. andrei and i were riding back from brooklyn. we were on the west side bike path and my gears kept slipping. my foot got caught in something and i flipped over. i hit my head (was wearing helmet) and all four limbs. i went to the hospital the next morning and they said my left elbow was fractured but not too badly. i probably won't need a cast. right now it's in a sling. i have to go see an orthapedist next week. it doesn't hurt too bad but sometimes it spazzes out and tightens and that kills." Anyway, typing isn't as fun as it used to be, but there are still so many important VIBES to explore... At a party this weekend I was talking to Carrie "rock the" Babcock, an ambiguously ethnic college student whose ancestors CAME OVER ON DA MAYFLOWER.

Desire path A typical desire line A desire path (also known as a desire line, social trail, goat track or bootleg trail) can be a path created as a consequence of foot or bicycle traffic. The path usually represents the shortest or most easily navigated route between an origin and destination. 29 Semi-Productive Things I Do Online When I?m Trying to Avoid Real Work You don’t always have to work hard to be productive. Productivity can simply be the side effect of doing the right things. So here’s a list of 29 semi-productive things I do online when my mind is set on avoiding ‘real work.’ Check delicious popular tags like ‘useful,’ ‘tutorials,’ ‘tips,’ ‘howto,’ ‘advice,’ ‘entrepreneurship,’ etc. for interesting, educational articles to read.Watch one of the thousands of educational videos streaming at TED.com, Academic Earth and Teacher Tube.Read an online book list and find a new book to grab next time I’m at the library. Here’s another list.

adhoc-on-android - Java library that provide creation and termination of ad-hoc networks on the android platform with multi-hop communication through the AODV routing protocol As part of acquiring the degree of B.Sc. in engineering, there has have developed an ad-hoc library that may be included to any Android app that need to run on a mobile ad-hoc network. The library comprises a routing protocol module (based on AODV) and a setup module for creating and stopping an ad-hoc network on supported Android devices. The current supported Android phones are HTC Hero, Nexus One and HTC Dream, though only the first two phones are actually tested. The developed library is only a prototype, meaning that many improvements are available, including letting the library create an ad-hoc network with less manual "interfering". By interfering it is meant that the library e.g. require that the tiwlan.ini file exist (for Hero) on the phone.

On Self-Promotion You are a shameless self promoter!” he said. I can’t speak to the “shame” part, but for the rest: guilty as charged. Self-promotion may appear revolting, but it’s the only promotion that’s guaranteed in this business. Do it right, and only haters will hate you for it.

Private Language and Marketing-Speak Marketing is, to a large extent, about communication. Consumer desire needs to be translated into a product and, in turn, the consumer has to understand how the product will make his life better in some way. A good marketer is a communication professional. Many marketers often use their own private language, marketing-speak, to communicate among their own tribe and with others. They shouldn’t. The marketing process is complex already and there’s no point in confusing everybody with opaque terminology that nobody understands.

My favorite line is actually a footnote: "This is isomorphic to the principle that you should prevent your beliefs about how things are from being contaminated by how you wish they were. Most people let them mix pretty promiscuously. The continuing popularity of religion is the most visible index of that." You asked me once what I would change about the world, if I could. I've decided that it would be this:requiring politicians to take off their rose-colored glasses and separate what they wish from reality. by maia.alina Aug 30