What's your sign? Discover the world of signs and symbolic meanings. 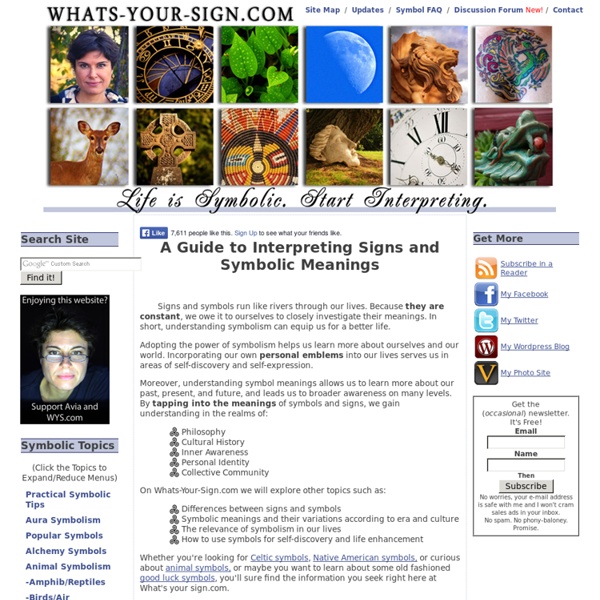 Signs and symbols run like rivers through our lives. Because they are constant, we owe it to ourselves to closely investigate their meanings. In short, understanding symbolism can equip us for a better life. Adopting the power of symbolism helps us learn more about ourselves and our world. Incorporating our own personal emblems into our lives serves us in areas of self-discovery and self-expression. Moreover, understanding symbol meanings allows us to learn more about our past, present, and future, and leads us to broader awareness on many levels.

ASTROTHEOLOGY & SHAMANISM, A review by Gerrit J. Keizer Review of the Second Edition With Colour Illustrations of ASTROTHEOLOGY & SHAMANISM: Christianity’s Pagan Roots. A Revolutionary Reinterpretation of the Evidence, by Jan R. Irvin and Andrew Rutajit (Gnostic Media, 2009). By Gerrit J. Keizer, clinical psychologist, mycologist and forest ecologist. Boston Artist Transforms Homeless' Signs Into Works Of Art Update, 5:00PM: Since this story aired Monday morning, WGBH News has learned that Michael Lehman is listed on the Massachusetts Sex Offender Registry Board as a Level 3 offender. In an email to WGBH, Signs for the Homeless' Christopher Hope said he was not aware of Michael Lehman's status as a Level 3 sex offender: "The mission of Signs for the Homeless is to raise awareness around homelessness through hand painted signs and sharing the homeless's narratives around the world. The new information does not change our commitment in neutrally sharing the stories of the homeless." Maybe you see a homeless man sitting on a bench, or a woman holding a sign on a street corner. Maybe you strike up a conversation, give a few bucks.

Relationship Rules Human beings crave intimacy, need to love and be loved. Yet people have much trouble doing so. It's clear from the many letters I get that lots of folks have no idea what a healthy relationship even looks like. Because I care about these things, and care about the environments children grow in, I'm using this space as an attempt to remedy the problem—again. From many sources and many experts, I have culled some basic rules of relationships. This is by no means an exhaustive list. Introduction to Cosmology Cookies on the New Scientist website close Our website uses cookies, which are small text files that are widely used in order to make websites work more effectively. To continue using our website and consent to the use of cookies, click away from this box or click 'Close' Find out about our cookies and how to change them Log in

Thematic Apperception Test The Thematic Apperception Test, or TAT, is a projective psychological test. Proponents of this technique assert that a person's responses reveal underlying motives, concerns, and the way they see the social world through the stories they make up about ambiguous pictures of people.[1] Historically, it has been among the most widely researched, taught, and used of such tests.[citation needed] History[edit] The TAT was developed during the 1930s by the American psychologist Henry A.

The real-life Django: black Wild West marshal Bass Reeves who arrested 3,000 outlaws and killed 14 men Bass Reeves was born a slave in 1838 and later broke from his owner to live among Native AmericansReeves became a Deputy U.S. Marshal in 1875 at the age of 38During his 32-year career as a Deputy Marshal he arrested 3,000 felons, killed 14 men and was never shot By Daily Mail Reporter Published: 14:44 GMT, 19 January 2013 | Updated: 18:15 GMT, 19 January 2013 Bass Reeves, one of the first African Americans to become a Deputy U.S.

HumanitiesWeb Welcome to HumanitiesWeb Welcome to Humanities Web. The mission of HumanitiesWeb is to build a humanities site that will show the interconnections, the web, the links, between history, the arts, and culture - and how each plays off and influences the others. 8 Harsh Truths that Will Improve Your Life - Dumb Little Man They say life is what we make of it. By the end of this post, I hope to have helped you decide whether that statement is true or not. There is no doubt that life has its ups and downs. However, how we deal with them can sometimes make all the difference. Today I want to share eight harsh truths that I’ve come to learn from life. Fashion History Movies Music A list of slang words and phrases that were used during the 1940s, and their meanings. This is just icing on the cake when you consider what the decade already gave us in the form of patriotism, music, fashion, and movies. Now, a language! In no particular order: Take a powder – to leave

Twelve Virtues of Rationality by Eliezer Yudkowsky - StumbleUpon by Eliezer Yudkowsky The first virtue is curiosity. A burning itch to know is higher than a solemn vow to pursue truth. To feel the burning itch of curiosity requires both that you be ignorant, and that you desire to relinquish your ignorance. If in your heart you believe you already know, or if in your heart you do not wish to know, then your questioning will be purposeless and your skills without direction. Curiosity seeks to annihilate itself; there is no curiosity that does not want an answer.

Is the Universe Conscious? -This post is excerpted, with changes, from the book Darwin, God and the Meaning of Life by Steve Stewart-Williams - available now from Amazon.com , Amazon.ca , and Amazon.uk . Take out a piece of paper and draw a vertical line right down the middle. On one side of the page, make a list everything in the world that you're sure is conscious; on the other, make a list everything that you're sure is not. Unless you're one of those people who pretends that consciousness doesn't exist, it's a safe bet that you'll have human beings on the conscious side; probably you'll have at least some other animals there to keep them company too. Unless you're a New Ager or mentally unbalanced, it's a safe bet that you'll have things like rocks and potato peelers on the other side, the unconscious side.

H. G. Wells Herbert George "H. G." Wells (21 September 1866 – 13 August 1946)[3] was an English writer, now best known for his work in the science fiction genre. He was also a prolific writer in many other genres, including contemporary novels, history, politics and social commentary, even writing textbooks and rules for war games. Wells is sometimes called "The Father of Science Fiction", as are Jules Verne and Hugo Gernsback.[4][a] His most notable science fiction works include The War of the Worlds, The Time Machine, The Invisible Man and The Island of Doctor Moreau.

John L. Holland John Lewis Holland[1] (October 21, 1919 – November 27, 2008) was Professor Emeritus of Sociology at Johns Hopkins University[2] and an American psychologist. He died on November 27, 2008, at Union Memorial Hospital.[2] Holland is best known as the creator of the career development model, Holland Occupational Themes (Holland Codes). Childhood[edit] Holland was born on October 21, 1919 in Omaha, Nebraska, one of four children.[1] His father emigrated from England to the U.S. when he was 20 and worked as a laborer until night school at the YMCA led him to become an advertising executive. His mother was an elementary school teacher.[1]Holland eventually studied psychology, French, and math at the Municipal University of Omaha (now the University of Nebraska at Omaha) and graduated in 1942.[1][3]