Learning the Tarot - An On-Line Course 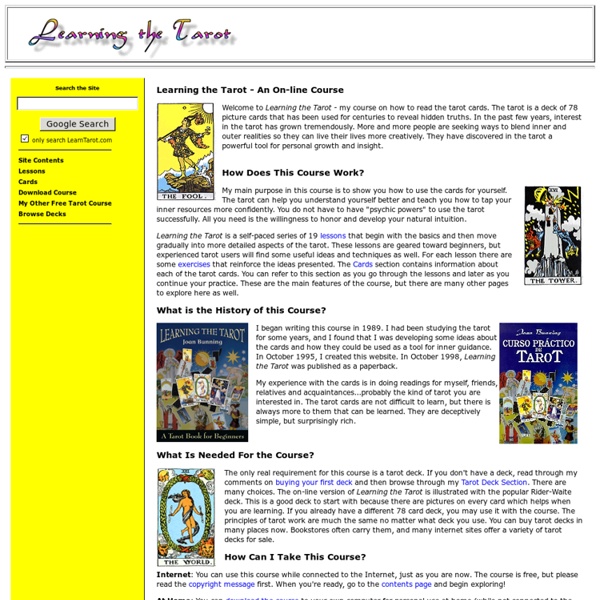 Fortune Telling Playing Cards It's All in the Cards As a teenager, I came across an old fortune-telling magazine that featured a divination method using a regular deck of playing cards. This method appealed to me because the cards were related to Astrology. In fact, the four suits were associated with the four elements (Fire, Earth, Air, and Water). Long before people used cards to play games, they were used to foretell the future. Although there are different ways to approach cartomancy, we will show you a simple method and lay out the basic meanings attached to each playing card below. Once you know the basic meanings of the playing cards, you can choose a spread that is right for you. First things first, the suits (Hearts, Clubs, Spades, and Diamonds) are associated with the four elements, as follows: Ace of Hearts Love and happiness. Queen of Hearts A fair-haired woman with a good nature; or a woman with Water signs predominating in her chart. Ace of Clubs Wealth, prosperity, unexpected money/gain.

Learn Tarot Free Online Tarot Lessons – Spiritual Guidance Tarot Have you ever wanted to learn Tarot but felt daunted by all the hundreds and even thousands of different books, decks, lessons etc? I completely understand! That’s why I am going to teach you Tarot – or more importantly teach you how to teach it to yourself in the most effective way possible. Start with the steps below – read and do the Tarot journal below exactly as I outline it. I focus on learning the Tarot a bit differently than others. This doesn’t have to be anything fancy; in fact, you can start off with a 3 ring binder. Once you have your deck, you want to pick a card per day – at random or in order, up to you. What is the first thing you notice? Answering these questions for each card, one per day gives you an opportunity to really connect with the imagery, to personalize it and get a strong feel for your cards. Do this PRIOR to reading any books or other definitions for the cards. I will be linking to various blog posts below in order, but don’t wait for me Tarot Numerology Save

The Tarot Connection Learn Cartomancy, A Guide To Fortune Telling. Meanings, Spreads, and More Cartomancy is the act of divining using cards. Divining means to find out by inspiration, intuition or magic; to foresee.Learn the past, present and future with a regular deck of playing cards. No tricks, no special talent, no psychic ability. It is not magic either. If you can read this you can learn cartomancy with a regular deck of cards. All you need is some basic knowledge. Some History The Gypsies are probably the most well know people that have in the past used cartomancy for fortune telling. Click on words below to go there fast. Look at Predominant Suit Predominant Hearts - concern is emotional Predominant Diamonds - concern is material Predominant Clubs - concern is for achievement and recognition Predominant Spades - concern is antagonistic or for power without responsibility If the reading does not require a Significator card, make a mental note of the Significator card which would represent the Questioner. If timing is involved, read the cards as follows: Stages Method:

Tarot Cards | Tarot Readings I don't have much time. Do they take long to read? That depends on whether you wish to perform a longer, more detailed reading, or a shorter, 'To the Point' kind of reading. So now, get your own pack, do away with astrologers and fortune tellers and become the master of your own future. How do Fortune Telling Card Readings differ from Tarot Card Readings? Tarot readings require the Tarot reader to establish a connection with his or her deck, through which the Tarot reader can divine the meanings of the cards, as they lie in a layout for a particular question. Although these 'Fortune Telling Cards' are derived from the Tarot and therefore closely associated with them, they are much easier to read. The Power Fortunes’ Pack (some people prefer to say 'Deck'), consists of thirty two titled cards, with pictorial descriptions, which explain the different meanings that a card can have relative to it's position. Are Fortune Telling Cards for Real? Interpreting Tarot Cards

Beginner Witchcraft Over the centuries, it has always been a mystery as to whether witches and wizards really do exist. Through television and movies, witches were introduced in the past as really ugly women with long, crooked noses and warts all over their face. They have this thick set of eyebrows; a long, black robe, and a pointed hat. They ride their trusted brooms to the sky at night to get from one place to another. At present, the image of a witch has changed. Because of this sudden change and twist in character. Is it really possible for an ordinary person to understand the workings of a witch? Probably the answer is yes. Being a witch is not easy. The course is comprehensive in nature. Once they are done with the first step, they should prepare themselves for the second. It would probably take lots of practice before one can master the techniques in being a witch. Some avices and basic steps for those who want to practice Beginner Witchcraft

The Revived Tarot 7 Major Arcana Restored According to the The Levels of the Text The deepest proofs of the "emergence of the planet from the letter", rather than arbitrary assignment, lie in the semantic structures of linked categories: for instance, the Hebrew letter that forms the planet, sign or element and the contrary planetary qualities in their zodiacal environments: Bayt, Saturn, Ayn, Capricorn and the qualities of life and death. As a introduction and incentive to look deeper, we can first examine some of the more accessible correlations to be found in the symbolic structuring of the Tarot, particularly when a trump contains visual clues as to its native position, as well as its meaning, in the sequence of letters and images. These patterns are invisible until the Tarot is sequenced in its natural order. The twenty-two trumps are not just a series of images or arbitrary mythotypes; they are the component squares of a three-level visual mosaic which must be re-aligned for the pattern to emerge. Back | Contents | Next

Tarot Bytes - The Tarot Lady Bite-sized lessons for Tarot beginners Created by Theresa Reed, The Tarot Lady Curious about Tarot – but feel intimidated by your deck? Feel like it’s going to take an eternity before you can remember what all those cards and symbols mean? Want to start shuffling, picking cards, and doing readings for yourself and your friends – but not sure how to do it correctly? No stress, Tarot newbie! No complicated jargon or tedious philosophical lectures here. Grab your favorite deck, put in your earbuds, and dive in! xo Theresa

Taroteca [ ] 2009-06-13 Reading Ordinary Playing Cards Divination and Fortune telling with regular playing cards © Cheryl Lynne Bradley 2001-2009 Divining from regular playing cards is an old practice and I am sure many of us know at least one fortune-telling game done with this tool. Reading regular cards is called cartomancy or metasymbology. Playing cards have been called "The Devil's Picture Book" and have a few superstitions associated with them. Other omens and superstitions about playing cards involve their use in gambling. Gong Hee Fot Choy, "Greeting of Riches," is a divination system utilizing regular playing cards which Margarete Ward, a mystic and world traveler, introduced in her 1935 book. Tarot reading layouts readily adapt over to regular card reading as do divinatory meanings. Relationship Potential Reading A fun reading to ascertain the future of potential suitors involves separating the Kings or the Queens from the deck. Deal out the remaining cards face up, laying them out one at a time on or below one of the Trumps, proceeding across all four and returning to the beginning if required. Hearts (Cups): Sources

Why Another Wicca Course? | A Witch's Sacred Journey To follow a Wiccan path is to be part of a story and history that is as ancient as the stars and as new as the next wave of neo pagan philosophies and practices. It is to push your toes deep into the earth’s soil, dive to the depths of a lake, feel the heat of the sun upon your face and savor every inhalation and exhalation of breath that we require for Life. This path has been tread by many and each grain of dirt, stone and leaf carries a part of that individual’s legacy and consciousness within it just as each individual drew some of the earth’s essence into their own being. I am a 3rd degree initiate and Wiccan High Priestess of Oak and Willow, a coven within the Tradition of the Assembly of the Sacred Wheel. I was also a ballet dancer, and although I did not realize at the time, this was the vehicle for my spiritual connection. Now, all the while that I was unknowingly creating true magick, I was also exploring and coming to a place of wanting to grow a spiritual self. Like this:

Tarot Passages 2009-04-29 Another Method for Reading Ordinary Playing Cards © Cheryl Lynne Bradley 2009 Given that we are in trying economic time and not every can afford, or is interested in, owning or learning Tarot cards, here is another method for reading ordinary playing cards. Cull the deck down to 32 cards, discard all cards from the 2’s to 6’s. Shuffle the 32 cards and count the cards out until you reach the 7th card. Place the 7th card on the table and put the first 6 aside. To read this spread you don’t read the card individually. To further enhance the reading, read the 1st and 12th card together, 2nd and 11th, 3rd and 10th and so on.