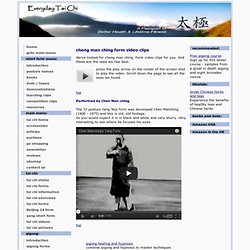 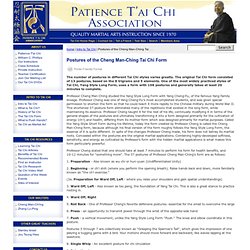 The original Tai Chi form consisted of 13 postures, based on the 8 trigrams and 5 elements. One of the most widely practiced styles of Tai Chi, Yang Style Long Form, uses a form with 108 postures and generally takes at least 20 minutes to complete. Professor Cheng Man-Ching studied the Yang Style Long Form with Yang Cheng-Fu, of the famous Yang Family lineage. Professor Cheng was one of Yang Cheng-Fu's most accomplished students, and was given special permission to shorten the form so that he could teach it more rapidly to the Chinese military during World War II. Instructional Videos.