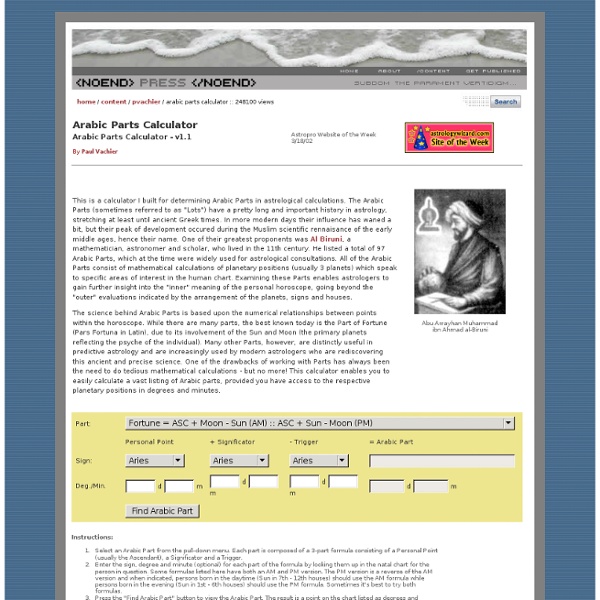 M. Fumagalli - The calculation of the lots, according to Placidus According to the system of Placidus, the lots may be defined as the points of the local space chart which, having the same declination as the point B, are as many degrees away from it in right ascension (RA), as the point C is away from a point A in oblique ascension (OA) and in the same direction. The points A and B may be planets, house cusps or even lots; the point C is usually the oriental horizon or horoscope (hor). The name and the astrological meaning of the lot depend on the quality of the points A and B, on the basis of which the lot is calculated: the lot calculated from the Sun to Saturn is called the father's lot as these two celestial bodies are the significators of the father. OA (hor) - OA (A) + RA (B) = RA lot OA (hor) - OA (A) + OA (B) = OA lot by day: OA (hor) - OA ( by night: OA (hor) - OA ( As I wanted the drawing to be as clear and simple as possible, I have left out the ecliptic in the figures and I have placed the Sun on the equator, at the autumnal equinox. 3. 4.

Astrology Articles your birth chart is a life clock We are all familiar with a baby's milestones and the changes that occur throughout their first years of life, but this can be applied to adults. At certain ages we can expect particular themes and events to be prevalent at that time. The twelve houses in the chart correspond with twelve periods of six years in your life, so by the time you have progressed around the chart you will be seventy two, time to enter your second childhood! So from the age of 18 to 24, you will be in the Fourth House of home and family. From 24 to 30, you will be in the Fifth House, the area in your life associated with love affairs, creative self-expression, children and risk taking. From 30 to 36 you will be in the Sixth House, where work and service to others will be important. 36 marks a major turning point. From 36 to 42 you will be in the Seventh House. From 42 to 48 you will be in the Eighth House, maybe one of the most testing times in your life. From 66 to 72.

Arabic Parts Arabic Parts This page contains my notes on significant Arabic Parts or Lots. If you wish to learn details, please see some of the comprehensive resources listed. The dispositor of the part (ruler of the sign it is in) is the Significator although major transits to the part itself are also significant. If you need help Arabic Parts Calculator . Part of Fortune Asc + Moon - Sun The Part of Fortune is Lunar in nature, the part of the Moon. The 11th house from the Part of Fortune is the "Place of Acquisition" or where one will acquire the material payoff. Lot of fortune is a lunar part. Lot of fortune shows where the moon would be if the sun were rising. Some astrologers recommended changing these day and night (Robert Hand). Part of Spirit or Lot of Spirit Asc + Sun - Moon The Part of Spirit is Solar in nature, the part of the Sun. It shows the character of the soul, the sense of purpose. Part of Marriage This is about the relationship not the ceremony. Asc + Desc - Venus Part of Divorce Other Parts

Astrology: Arabic Parts Astrology Calculator This is a calculator I built for determining Arabic Parts in astrological calculations. The Arabic Parts (sometimes referred to as "Lots") have a pretty long and important history in astrology, stretching at least until ancient Greek times. In more modern days their influence has waned a bit, but their peak of development occured during the Muslim scientific rennaisance of the early middle ages, hence their name. One of their greatest proponents was Al Biruni, a mathematician, astronomer and scholar, who lived in the 11th century. He listed a total of 97 Arabic Parts, which at the time were widely used for astrological consultations. All of the Arabic Parts consist of mathematical calculations of planetary positions (usually 3 planets) which speak to specific areas of interest in the human chart. The science behind Arabic Parts is based upon the numerical relationships between points within the horoscope.