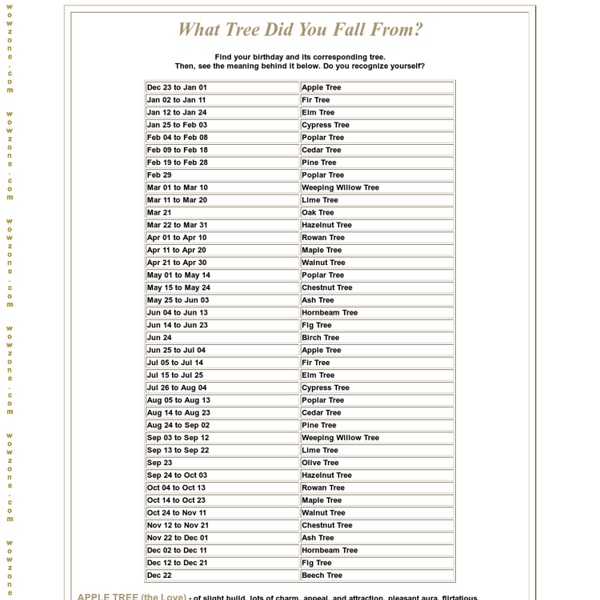 Find your birthday and its corresponding tree. Then, see the meaning behind it below. Do you recognize yourself? APPLE TREE (the Love) - of slight build, lots of charm, appeal, and attraction, pleasant aura, flirtatious, adventurous, sensitive, always in love, wants to love and be loved, faithful and tender partner, very generous, scientific talents, lives for today, a carefree philosopher with imagination. ASH TREE (the Ambition) - uncommonly attractive, vivacious, impulsive, demanding, does not care for criticism, ambitious, intelligent, talented, likes to play with fate, can be egotistic, very reliable and trustworthy, faithful and prudent lover, sometimes brains rule over the heart, but takes partnership very seriously. BEECH TREE (the Creative) - has good taste, concerned about its looks, materialistic, good organization of life and career, economical, good leader, takes no unnecessary risks, reasonable, splendid lifetime companion, keen on keeping fit (diets, sports, etc.)

10 interesting facts you probably didn’t know Fact Source It’s called Paternoster. Fact Source Fact Source Fact Source Fact Source Robot Skin Can Feel Touch, Sense Chemicals, and Soak Up Solar Power When you meet your robot overlord, it may be wearing super-intelligent skin designed by a Stanford researcher--a solar-powered, super-sensitive, chemical-sampling covering that makes your meatbag covering look pathetic. Zhenan Bao is behind the advances, and the recent development centers on a stretchable solar cell system that can expand and shrink along two different axes, making it perfect for incorporation into artificial skin for robots, human prosthetic limbs, or even clothing. Bao's earlier successes with artificial skin have resulted in a highly flexible and durable material, which is part of a flexible organic-chemistry transistor, built on a thin polymer layer. When the skin is subjected to pressure, the current flowing through the transistors is modified as tiny pyramid shapes molded into the polymer layer compress, resulting in a super-sensitive transducer that can apparently detect the pressure from a house-fly's feet.

47 Sites Every Recording Musician Should Visit In a recent “Open Mic” we asked you, “Which music-related sites do you visit regularly?” This article is a summary of the great suggestions given in the comments to that article. You can make the list even longer by commenting on this article. As you’re reading this article, Audiotuts+ needs no introduction. Mod Podge Shoes My husband jokes every time I get the bottle of Mod Podge out that I’m going to Mod Podge fabric to our computer keys or Mod Podge our kids clothing to their bodies. Hey, don’t tempt me. I know, I may go a little overboard with this stuff…….but I just had to try it on some shoes. Originally, I saw the idea on a site my sister showed me. And the lady Mod Podged starburst wrappers to some shoes.

13 Useful Keyboard Shortcuts For the Insane Workplace Everyone here at Cracked is pretty adept at using computers, and indeed we've had to be, ever since they told us we had to stop making magazines. And as with most computer-savvy people, we make heavy use of shortcuts and keystrokes to make our jobs easier, because apparently fannying about all day in comfortable chairs isn't easy enough for us limp-wristed chuckle-peddlers. LOL, looks like you guys could use a keyboard shortcut for not dying in a methane explosion, are we right? Because we can't do a god-damned thing without enumerating its many variations and rating them on badassedness, we decided to do that here with our favorite keyboard shortcuts. These are shortcuts that we use every day at Cracked.

Now Read This: 5 Sites Every Smart Consumer Should Bookmark Did you hear about the Stars & Stripes sweepstakes scam, where newspaper readers get calls by someone claiming to work for the Federal Trade Commission who tells them they’ve won $470,000 in a contest? You would if you followed the Better Business Bureau online. How about the bank fee that eats almost all of the earned interest on a CD? You’d know about it if you read Bob Sullivan’s consumer blog, The Red Tape Chronicles, on MSNBC.com. Back in 1997, Direct Marketing News estimated each of us sees more ads in one year than people of 50 years ago saw in an entire lifetime. Today, it could be argued that we see more ads in one year than people in 1997 did in a lifetime, had that number remained constant.

Gourmet, Artisanal Cheese Delivery with Free Shipping I give the Seasonal package every year to my Dad and Step Mother, they are both cheesies and always rave about the selections. I've been told not to change my gift...ever! I received the cheese of the month club as a birthday gift from my co-workers. It's kind of an inside joke that I'm picky about my cheeses and everyone had a good laugh. But let me tell you, these cheeses are no joke! Magic circle Common terms and practices[edit] A solomonic magic circle with a triangle of conjuration in the east. This would be drawn on the ground, and the operator would stand within the protection of the circle while a spirit was conjured into the triangle.[citation needed] Traditionally, circles were believed by ritual magicians to form a protective barrier between themselves and what they summoned.[1] In modern times, practitioners generally cast magic circles to contain and concentrate the energy they believe to raise during a ritual.

The Geek’s Guide to Getting Almost Anything for Free Does it pay to be Internet savvy? Yes. In more ways than many people imagine. 6 Beloved Characters That Had Undiagnosed Mental Illnesses It's unlikely that the writers who created these characters consciously decided they would give them an undiagnosed mental disorder as one of their traits. Maybe they were just borrowing behaviors of a "quirky" friend, or maybe the writers suffered from the disorder and wrote the characters to mimic their own life. But one way or another, these characters show all the symptoms ... #6. Sherlock Holmes -- Asperger's Syndrome

Economic Myths "The Olympian gods" Nicolas-André Monsiau (1754–1837) Mainstream economists and so-called experts have filled the minds of most Americans with many economic myths that are constantly reinforced by the media and repeated on the streets. These myths are erroneous at best, sometimes based on half truths. culdesac: the paint evolution for valentine 'the paint evolution' by culdesac for valentine valencia-based designers culdesac have created 'the paint evolution' for the paint company valentine . their collaborative project celebrates the ever changing nature of artistic tools and implements within the valentine brand. brushes and rollers in this creative collection feature an interactive, form-as-function approach to the construction of each piece. one may anticipate the mark and movement of the implement in an artist's hand simply by examining the form of each object.

IT'S HERE!!!! DIY MAXI SKIRT TUTORIAL! I have become OBSESSED with MAXI dresses! They are all over Pinterest right now. But for the record, my obsession with them came long before my Pinterest account :).