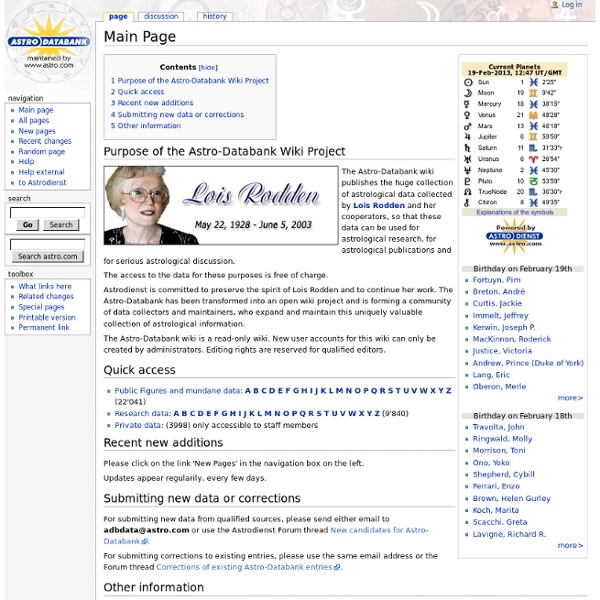 Atlantis and Paleogeography Astrophysics Main Page - Astrowiki-en Astrology & the Chakras In this article I would like to explore the exciting possibility of bridging two of history's greatest psychological systems -- astrology and the chakras. Conventionally, these two systems have been seen as having little or nothing to do with each other, the former primarily concerning the outer world, or macrocosm, and the latter involving the inner world, or microcosm. In fact, as we shall soon see, these two systems are but two sides of the same coin, each one complementing the other and thus enhancing our understanding of both. The basic system of correspondences I will be using here is drawn from teachers I have studied with in the Kriya Yoga lineage.1 The general system of "chakric horoscopes" and their guidelines for interpretation are my own, developed over more than a decade of working with these basic correspondences. What Are the Chakras? In Sanskrit, the word chakra (sometimes spelled "cakra") literally means "wheel". Chakra 1, at the base of the spine, is called Muladhara.

Horoscopes week of November 10, 2016 Thank You For Making My Life Better Sometime in the next 24 hours, try saying this to someone (but only if you really mean it): "Thanks for making my life better." Dear Readers - One of my main reasons for being on planet Earth is to help minimize and alleviate the world's suffering -- among my fellow humans as well as among the animals and plants and spiritual beings with whom we share this realm. To that end, I support Hillary Clinton for President. P.S.: Bernie was my first choice, and I hope that he and the movement he has energized will work their magic on President Clinton in the coming years. My bookPronoia Is the Antidote for Paranoia is available at Amazon and Powells. Below are excerpts. I cheerfully celebrate the mantra, "I don't know." It's fun to say. I love to let go of the drive to have it all figured out: "I don't know." I exult in proclaiming the only truth I can be totally sure of: "I don't know." I empty my mind and lift my heart: "I don't know." 1.

Axial precession Precessional movement of the Earth – the Earth rotates (white arrows) once a day about its axis of rotation (red); this axis itself rotates slowly (white circle), completing a rotation in approximately 26,000 years Earth's precession was historically called the precession of the equinoxes, because the equinoxes moved westward along the ecliptic relative to the fixed stars, opposite to the yearly motion of the Sun along the ecliptic. This term is still used in non-technical discussions, that is, when detailed mathematics are absent. With improvements in the ability to calculate the gravitational force between and among planets during the first half of the nineteenth century, it was recognized that the ecliptic itself moved slightly, which was named planetary precession, as early as 1863, while the dominant component was named lunisolar precession.[3] Their combination was named general precession, instead of precession of the equinoxes. Precession nomenclature[edit] Effects[edit] Maya[edit]

JOAN of ARC as MILITARY COMMANDER, an article by John Henry Egan <-- back to article list JOAN of ARC as MILITARY COMMANDER Military Illustrated, January 2000 by John Egan Joan of Arc is the most astounding figure in the whole of medieval history. What makes her story so especially compelling is that she is the most thoroughly documented figure in European history until the modern era. Her two trials, one of condemnation and one of rehabilitation, the latter in which over one hundred and fifty eye witnesses gave direct testimony to the events of her life and military career, are an enduring and unimpeachable record of a story so fabulous, it’s still hard to believe. Perhaps most astounding, the affirmations of her Captains indicate that Joan was in actual command of the French army, responsible for the strategic, grand tactical and tactical decisions which reversed the course of the Hundred Years War. Joan’s military career began when she arrived at the fortified town of Vaucouleurs in February 1429. What are you doing here, sweetheart? What nerve!

Retrograde and prograde motion This article is about retrograde motions of celestial bodies relative to a gravitationally central object. For the apparent motion as seen from a particular vantage point, see Apparent retrograde motion. Retrograde orbit: the satellite (red) orbits in the direction opposite to the rotation of its primary (blue/black) Formation of celestial systems[edit] When a galaxy or a planetary system forms, its material takes the shape of a disk. Most of the material orbits and rotates in one direction. Orbital parameters[edit] Inclination[edit] Axial tilt[edit] Planets[edit] All eight planets in the Solar System orbit the Sun in the direction that the Sun is rotating, which is counterclockwise when viewed from above the Sun's north pole. Dwarf planets[edit] Earth's atmosphere[edit] Retrograde motion, or retrogression, within the Earth's atmosphere refers to weather systems which move from east to west through the Westerlies or from west to east through the Trade wind easterlies. Moons and rings[edit] [edit]

Metatron's Cube Metatron's Cube Description[edit] The pattern delineated by many of the lines can be created by orthographic projections of the first three Platonic solids. Specifically, the line pattern includes projections of a double tetrahedron (aka stellated octahedron), a cube within a cube (a three-dimensional projection of a tesseract), and an octahedron. Although the image below shows the dodecahedron and the icosahedron fitting the pattern of Metatron's Cube, the vertices of those shapes do not coincide with the centers of the 13 circles (the icosahedron projection in the image below is false). to explain how ALL platonic solids fit within the design. See also[edit] Multiview orthographic projection References[edit] External links[edit] - animated creation of Metatron's cube using PaperJS

Bushloper.net - Index Ecliptic The Sun seems to move against the background stars as seen from the orbiting Earth. The ecliptic is the path the Sun appears to trace through the stars. The Earth completes its orbit and the Sun traces its entire path in a little over 365 days. Sun's apparent motion[edit] As the Earth takes one year to make a complete revolution around the Sun, the apparent position of the Sun also takes the same length of time to make a complete circuit of the ecliptic. Relationship to the celestial equator[edit] Once again, this is a simplification. Obliquity of the ecliptic[edit] The angular value of the obliquity is found by observation of the motions of the Earth and planets over many years. Obliquity of the ecliptic for 20,000 years, from Laskar (1986).[12] Note that the obliquity varies only from 24.2° to 22.5° during this time. Until 1983 the obliquity for any date was calculated from work of Newcomb, who analyzed positions of the planets until about 1895: Plane of the Solar System[edit]