Possible you will have to decide. Take the information and see if you can find anything contrary. Happy pearling

Secrets of an Immortal - An Eyewitness Account of 2,800 Years of History by Ben Abba. Is this a 2,500 Year Old Coin? While I was at Kumbh Mela 2010 this year, I found a rare coin shop that had a very interesting coin. 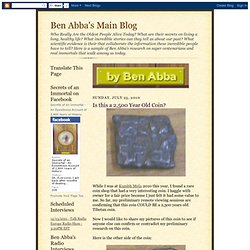 I haggle with owner for a fair price because I just felt it had some value to me. So far, my preliminary remote viewing sessions are confirming that this coin COULD BE a 2,500 years old Tibetan coin. Now I would like to share my pictures of this coin to see if anyone else can confirm or contradict my preliminary research on this coin. BEN ABBA - SECRETS of An IMMORTAL-An Eyewitness Account of 2800 Years 12/4/2010 - THE COMPLETE TEACHER. Follow Call in to speak with the host “The century mark in birthdays has always been a cause for notice in our society. 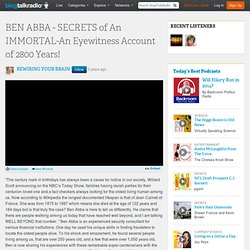 Willard Scott announcing on the NBC’s Today Show, families having lavish parties for their centurion loved one and a fact checkers always looking for the oldest living human among us. Now according to Wikipedia the longest documented lifespan is that of Jean Calmet of France. She was from 1875 to 1997 which means she died at the age of 122 years and 164 days but is that truly the case? 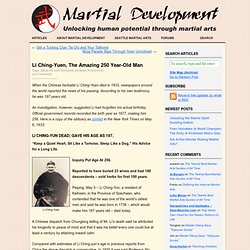 According to his own testimony, he was 197 years old. An investigation, however, suggested Li had forgotten his actual birthday. Official government records recorded the birth year as 1677, making him 256. Here is a copy of the obituary as printed in the New York Times on May 6, 1933: “Keep a Quiet Heart, Sit Like a Tortoise, Sleep Like a Dog,” His Advice for a Long Life. Li Ching-Yuen Inquiry Put Age At 256. Reported to have buried 23 wives and had 180 descendents – sold herbs for first 100 years. Longevity Guidelines, Age Extention. Longevity guidelines "Longevity is the sweetest fruit on the Taoist tree of health. 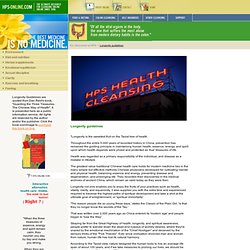 Throughout the entire 5,000 years of recorded history in China, prevention has remained the guiding principle in maintaining human health; essence, energy, and spirit upon which health depends were prized and protected as 'true' treasures of life. Health was regarded as a primary responsibility of the individual, and disease as a mistake in lifestyle. The greatest value traditional Chinese health care holds for modern medicine lies in the many simple but effective methods Chinese physicians developed for cultivating mental and physical health, balancing essence and energy, preventing disease and degeneration, and prolonging life. They recorded their discoveries in the medical archives of ancient China, which remain as valid today as they were then. 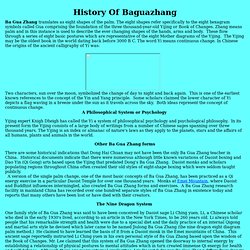 Qigong Teachings of a Taoist Immortal: The Eight Essential Exercises of Master Li Ching-yun (9780892819454): Stuart Alve Olson. June 1999. Patron Saint of the Month Li Ching-Yuen The photograph and the account below are from a book that I have on taoist yoga, Muscle/Tendon Changing and Marrow/Brain Washing Chi Kungby Dr. 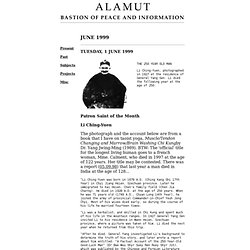 Yang Jwing-Ming (1989). BTW: The 'official' title for the longest living human goes to a french woman, Mme. Calment, who died in 1997 at the age of 122 years. "Li Ching-Yuen was born in 1678 A.D. "Li was a herbalist, and skilled in Chi Kung and spent much of his life in the mountain ranges. "After he died, General Yang investigated Li's background to determine the truth of his story, and later wrote a report about him entitled: "A Factual Account of the 250 Year-Old Good-Luck Man" (Er Bae Wuu Shyr Suey Ren Ruey Shyr Jih), which was published by the Chinese and Foreign Literature Storehouse (Jong Wai Wen Kuh), Taipei, Taiwan.

"All of the information available indicates the story is true. FYI (cultural perspective): In 1678 Vivaldi was born and John Bunyan published Pilgrims Progress. Old, Older, Oldest Vitriol. The Legend of Li Ching-Yuen. In the province of Szechwan in China lived until last week Li Ching-yun. 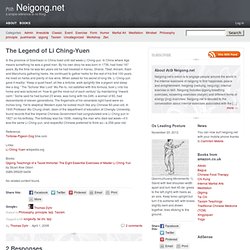 In China where Age means something he was a great man. By his own story he was born in 1736, had lived 197 years. By the time he was ten years old he had traveled in Kansu, Shansi, Tibet, Annam, Siam and Manchuria gathering herbs. He continued to gather herbs for the rest of his first 100 years. He lived on herbs and plenty of rice wine. Tien Shan benefits. After doing this Chi Kung for awhile you will feel a sense of buoyancy, energy, and vigor. 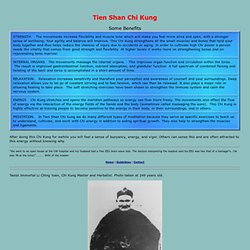 Others can sense this and are often attracted to this energy without knowing why. "We went to an open house at the UW hospital and my husband had a free EEG brain wave test.