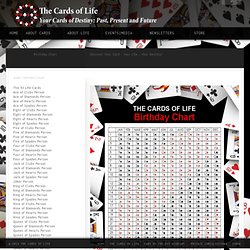 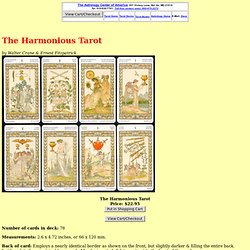 Back of card: Employs a nearly identical border as shown on the front, but slightly darker & filling the entire back. Inside, a lot of symmetrical busy-work. May be inverted. Booklet included: Yes, 64 pages, 2.6 x 4.74 inches, or 66 x 120 mm. Publisher: Lo Scarabeo. Comments: This deck was inspired by the work of Walter Crane (1845-1915), a socialist/Marxist Art Nouveau artist who lived in England.

Tarot Art Nouveau Review at Aeclectic Tarot. Review by Solandia Art Nouveau ('New Art') was a style of architecture and decoration, as well as an art movement, developed in Europe and the USA in the late nineteenth century. 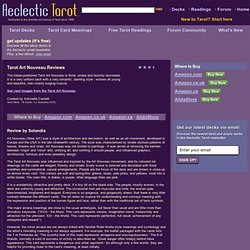 The style was characterised by ornate stylised patterns of leaves, flowers and vines. Art Nouveau was not limited to paintings - it was aimed at removing the barriers between 'major' and 'minor' arts, unifying art, and centring it around people, and influenced graphics, architecture, furniture and even jewellery design.

The Tarot Art Nouveau was influenced and inspired by the Art Nouveau movement, and its coloured ink drawings on the cards are elegant, flowery and ornate. Every scene is adorned and decorated with floral wreathes and symmetrical, natural arrangements. It is a wonderfully attractive and pretty deck, if a tiny bit on the bland side. The major arcana meanings are close to the usual archetypes, but fewer than usual and are little more than divinatory keywords. Tarot Teachings: The Art of Learning and Using Tarot. Numerological Significance of the Tarot. Using Regular Playing Cards. Sarena's Tarot Many professional cartomancers use a regular deck of playing cards for divination. 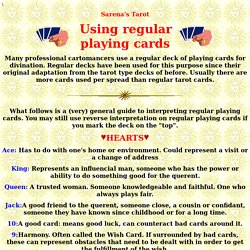 Regular decks have been used for this purpose since their original adaptation from the tarot type decks of before. Usually there are more cards used per spread than regular tarot cards. What follows is a (very) general guide to interpreting regular playing cards. You may still use reverse interpretation on regular playing cards if you mark the deck on the "top". Ace: Has to do with one's home or environment. King: Represents an influencial man, someone who has the power or ability to do something good for the querent. Queen: A trusted woman. Jack:A good friend to the querent, someone close, a cousin or confidant, someone they have known since childhood or for a long time. 10:A good card: means good luck, can counteract bad cards around it. 9:Harmony. 8:An event, a celebration, a party/bash..etc. 7:A card of disappointent. 6:Warning card. 4:The bachelor or old maid card. 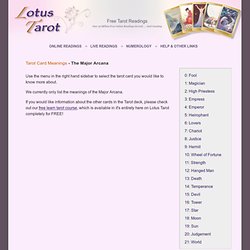 We currently only list the meanings of the Major Arcana. If you would like information about the other cards in the Tarot deck, please check out our free learn tarot course, which is available in it's entirety here on Lotus Tarot completely for FREE! The tarot cards used in this section are copyright © Tricia Newell and are from The Mythic Tarot by Juliet Sharman-Burke and Liz Greene, published in the US by Simon & Schuster/Fireside (1986), in the UK by Ebury Press/Random House UK (1986), in Australasia by Simon & Schuster (1989), in Canada by General/Stoddart (1988), in France by Editions de La Maisnie (2002), in Germany by Hugendubel Verlag (1987), in Czech Republic by Synergie (2001), in Russia by KSP-Plus (2000), in Portuguese by Livrarias Siciliano (1988) and reproduced by permission of Eddison Sadd Editions, London. 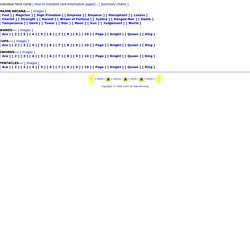