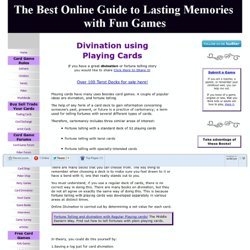 Over 100 Tarot Decks for sale here! Playing cards have many uses besides card games. A couple of popular ideas are divination, and fortune telling. The help of any form of a card deck to gain information concerning someone’s past, present, or future is a practice of cartomancy; a term used for telling fortunes with several different types of cards. Therefore, cartomancy includes three similar areas of interest: Serena's Guide to Divination and Fortune Telling. An informative, funny and unusual guide to divination and fortune-telling including free instant readings using dice, dominoes, chien tung and mahjong. Find out how to use palmistry, face reading, body rea. 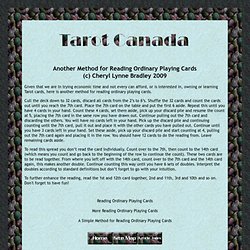 Cull the deck down to 32 cards, discard all cards from the 2’s to 6’s. Shuffle the 32 cards and count the cards out until you reach the 7th card. Place the 7th card on the table and put the first 6 aside. Repeat this until you have 4 cards in your hand. 2009-06-13 Reading Ordinary Playing Cards Divination and Fortune telling with regular playing cards © Cheryl Lynne Bradley 2001-2009. Divining from regular playing cards is an old practice and I am sure many of us know at least one fortune-telling game done with this tool. 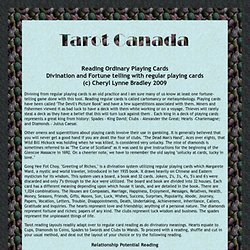 Reading regular cards is called cartomancy or metasymbology. Playing cards have been called "The Devil's Picture Book" and have a few superstitions associated with them. Miners and fishermen viewed it as bad luck to have a deck with them while working or on a voyage. Thieves will rarely steal a deck as they have a belief that this will turn luck against them . Each king in a deck of playing cards represents a great king from history: Spades - King David; Clubs - Alexander the Great; Hearts -Charlemagne; and Diamonds - Julius Caesar. Other omens and superstitions about playing cards involve their use in gambling. 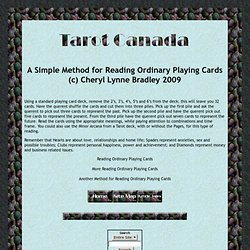 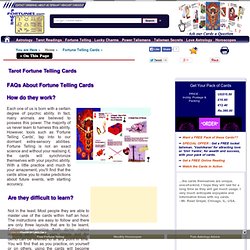 Do they take long to read? That depends on whether you wish to perform a longer, more detailed reading, or a shorter, 'To the Point' kind of reading. That is, it is upto you to follow a layout that suits you, as only one layout is required to be carried out at any given time. Of course, you may perform all three layouts in one sitting, if you so desire. Anyone who can read the cards is a welcome guest at almost any social gathering. So now, get your own pack, do away with astrologers and fortune tellers and become the master of your own future. 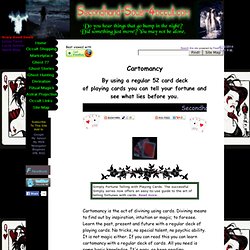 Divining means to find out by inspiration, intuition or magic; to foresee.Learn the past, present and future with a regular deck of playing cards. No tricks, no special talent, no psychic ability. It is not magic either. If you can read this you can learn cartomancy with a regular deck of cards. All you need is some basic knowledge. Some History The Gypsies are probably the most well know people that have in the past used cartomancy for fortune telling. 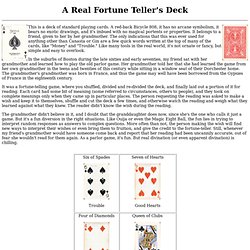 A red-back Bicycle 808, it has no arcane symbolism, it bears no exotic drawings, and it's imbued with no magical portents or properties. It belongs to a friend, given to her by her grandmother. The only indications that this was ever used for anything other than Canasta or Gin are a few quick words written at the top of many of the cards, like "Money" and "Trouble. " Like many tools in the real world, it's not ornate or fancy, but simple and easy to overlook. In the suburbs of Boston during the late sixties and early seventies, my friend sat with her grandmother and learned how to play the old parlor game. It was a fortune-telling game, where you shuffled, divided and re-divided the deck, and finally laid out a portion of it for reading. The grandmother didn't believe in it, and I doubt that the granddaughter does now, since she's the one who calls it just a game.

How to tell fortunes with playing cards. This book is important for the understanding of the Tarot and Tarot spreads, in particular the Opening of the Key Spread used by The Golden Dawn. 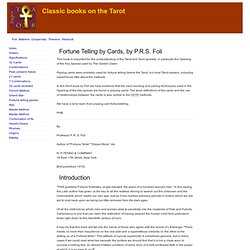 Playing cards were probably used for fortune telling before the Tarot, but most Tarot readers, including myself know little about the methods. In this short book by Foli we have evidence that the card counting and pairing techniques used in the Opening of the Key spread are found in playing cards. The terse definitions of the cards and the use of relationships between the cards is also similar to the OOTK methods. How to Tell love fortunes with cards. How to Read a Fortune With Playing Cards.