Why Curation Is Important to the Future of Journalism 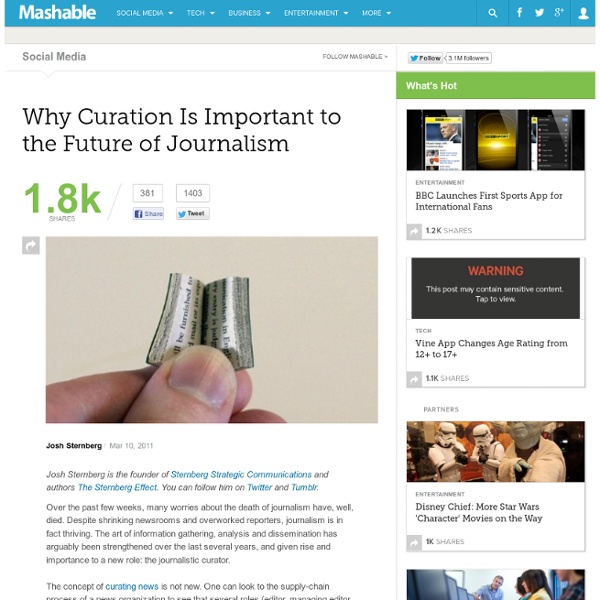 Josh Sternberg is the founder of Sternberg Strategic Communications and authors The Sternberg Effect. You can follow him on Twitter and Tumblr. Over the past few weeks, many worries about the death of journalism have, well, died. Despite shrinking newsrooms and overworked reporters, journalism is in fact thriving. The art of information gathering, analysis and dissemination has arguably been strengthened over the last several years, and given rise and importance to a new role: the journalistic curator. The concept of curating news is not new. But with the push of social media and advancements in communications technology, the curator has become a journalist by proxy. “Curation,” says Sayid Ali, owner of Newsflick.net, “gathers all these fragmented pieces of information to one location, allowing people to get access to more specialized content." Curation as an Intermediary Andy Carvin, senior strategist for NPR who runs their social media desk, finds meaning in the word "media."

There’s no such thing as a free journal Roving Bandit recently blogged with justifiable indignation about how Elsevier, a leading academic publisher (and publisher of the Lancet) had revoked their deal that offered free journal access to many in the developing world. In an ideal world academic research would be free to everyone. Costs for access to research are an important barrier to access to knowledge in developing countries, but not only there. We are struggling with limited budgets ourselves to provide access to staff to the most valuable information sources and have to make hard choices about what we provide to staff and what we don’t.

Curation techniques, types and tips News curators must collect, summarize, make sense, add value, attribute, link, intrigue and entice. Digital First Media announced today that Julie Westfall will lead our curation team, joined by Angi Carter and Karen Workman. I am delighted with our selections for this team and look forward to working with them as they explore and demonstrate what a news curation team should be. Mandy Jenkins introduces the candidates in her blog. Here I will discuss our expectations for those team members as well as for other Digital First journalists who will curate local content. Tea Party: Don’t Let Renters Vote - CBS MoneyWatch.com Last Updated Apr 26, 2011 5:07 PM EDT What to know what the Tea Party says about foreclosures and the housing crisis? Nearly two years to go until the next Presdential Election and already the Tea Party is deciding how to slice and dice voters. Here's a new Tea Party plank: Don't let renters vote.Gawker reported that Judson Phillips, president of prominent Tea Party group Tea Party Nation, has a terrific idea: "The Founding Fathers... put certain restrictions on... the right to vote... you had to be a property owner. And that makes a lot of sense." Here's the full quote, from Tea Party Nation Radio:

Concern Blogs » Blog Archive » Hard Cash in Hard Times Women in Gokwe, Zimbabwe, show their registration cards at a cash distribution point. Photo: Elena Ruiz Roman, Zimbabwe By Cormac Staunton, Information Officer, Concern Worldwide Sophia Chitsatse was 65 when I met her in Nyanga, Zimbabwe, a widow looking after four orphaned grandchildren. Although she was a farmer, she struggled to grow enough food for her family to last from one harvest to another.

A New Age of Curation in Journalism Mashable.com published a very interesting article on the growing phenomenon of journalistic curation. A curator is someone who acts as a medium between journalists / publications and readers. In today’s world of social media, link aggregators and social networking, almost anyone can attempt to be a curator. WERNER HERZOG - Vice Magazine Interviewing Werner Herzog is a guilt-ridden experience. That’s not to say he makes the questioner feel stupid or inferior, but there’s still a lingering notion that he could be drafting a screenplay or producing a film in the time it takes to ask him about doing those things. He’s written, produced, or directed (more often than not it’s all three) more than 50 movies. And it’s well known that he’d rather talk about what he’s doing than what he’s done. Following that line of reasoning, this is not an interview that attempts to analyze Herzog’s work. That’s been done to death.

Pearltrees Visualizes How You Organize the Web This post is part of Mashable's Spark of Genius series, which highlights a unique feature of startups. If you would like to have your startup considered for inclusion, please see the details here. The series is made possible by Microsoft BizSpark. LRB · Stephen W. Smith · Rwanda in Six Scenes A number of memories connected with Rwanda play in my mind like scenes from a movie, although I don’t pretend they add up to a film. In 1994 a genocide was committed against the Tutsi minority in Rwanda. All else about this small East African country, ‘the land of a thousand hills’, is open to question and, indeed, bears re-examination.

Journalists vs. curators What’s the difference between a journalist and a curator? —David Johnson, Berkeley, CA As David Carr of The New York Times put it at South By Southwest this year, “We’re all in the same business in a way. Ours is supported by ads; theirs is supported by borrowing content from elsewhere. FUNNY WOMEN #45: One-Handed Reading Loads of people have slept with authors or well-read individuals, but what would it be like to sleep with a book? The Metamorphosis and Other Stories by Kafka There’s something about it that seems like a BDSM fantasy, but here it’s the sadist that’s always tied up.